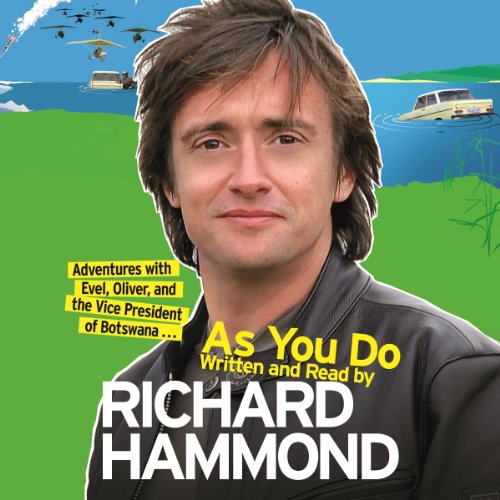 The wry, honest and often hilarious chronicles of a very brave and clever TV presenter, Arctic Explorer and general drawer of the Short Straw.

Moving quickly on from the devastating crash that nearly killed him he ranges widely over his life and times: a visit to Glastonbury with James May reminds of him of his early years of playing in a band and how and why he never quite made it as a rock star; the stunts and other perils that come his way like the TopGear North Pole race (why is it Richard who is out in the howling elements in a dog sled whilst the others are in the heated cab of an all-terrain vehicle?), Africa where he falls in love with and repatriates a stray car, and the US (once to be chased by Rednecks in middle America, the other in pursuit of his mad hero Evel Knievel); his passion for cars, what he owns and why and although he loves his wife why it is a toss-up whether he says hello to the wife or the cars first. Balancing home and family with a crazy, peripatetic working life (or not, sometimes), the hamster is well and truly back on the wheel.

Chapter on Evel is missing.

I don't know if the chapter on Evel was never recorded or wasn't included on Audible, but it's really disappointing to know that I'm not getting the whole book.

I only wish it had been unabridged!

Where does As You Do rank among all the audiobooks you’ve listened to so far?

As You Do ranks high on the list. Richard Hammond's self effacing sense of humor makes for a very fun listen

What was one of the most memorable moments of As You Do?

His description of meeting the sled dogs in the arctic race was epic! Not to put in any spoilers, but he literally gets dragged across the ice and through pile after pile of "doggie deposits" while the dogs essentially ignore him (they are very big and powerful) in their quest to reach their owner, whom they really care about.

This was narrated by the author, who does a fantastic job with the pacing and tone.

It's short, and full of laughs, I heartily recommend it.

A must for Top Gear fans

The sequel to "On The Edge", his first book after his horrific crash in the rocket car. Hammond's humour is one that we can all relate to. Even after becoming a huge celebrity and a successful family man and surviving a bone-chilling crash that should have killed him, he still writes with the innocence of a cheaky 10-year-old, but with the the intelligence of a graduate. His rants with his co-hosts are always hilarious and the tales of top-fueled craziness never left me wanting. Very well written, very well read. Great book. It was great to get another insight into his amazing life. And I feel like I know him like a friend after reading it. Definitely worth listening to.

A short but enjoyable performance!

Well read by the author, sadly the book is less than 4 hours long but would be good for a roadtrip. The only concern is that there is some swearing.

I loved the book, and Richard's reading of it, but there is a whole third of the book missing from this audio version. Not just an abridged version, it seems they just forgot to include a large portion of the book.

Unfortunately this is an abridged version, so it's only 3 hours long. Richard does an excellent job reading and the book provides insight into some of the most famous top gear challenges.

Hammond relates some of what happened during the production of TG segments like Botswana and the magnetic north pole. Very entertaining, but I just wish it was longer.

If you could sum up As You Do in three words, what would they be?

This is basically just Richard giving us a more detailed explaination of a few of the shows episodes and recounting how he managed and handled it all. It's an interesting listen.

It was very fun to listen to, having watched all TG specials it was great to hear Hammonds voice telling some details and emotions he felt in these great adventures.

just wish it was a bit longer

great story. I'd like it unabridged however. I reached the end wanting it to continue further. looks like I will just have to download another of my favorite car critics works.

I downloaded this as soon as it appeared and nowhere did the description mention how heavily edited this was. Agreed that it doesn't say unabridged but it would have been fair to say that a lot had been taken out. Whole chapters are missing from this version - not worth the money.

Good But Way Too Abridged - No Evel, No USA ?

This was a fun listen, Richard Hammond reads naturally and it's very 'boy's own adventure' in style. The book focuses on specific adventures - 3 of them and more than half of it is devoted to the polar adventure. The Botswana trip is dealt with quite quickly and then we have the floods in Gloucestershire. It's one thing to abridge a book for audio but this book is called As You Do - Adventures with Evel, Oliver & The President of Botswana. The USA trip and Evel Knievel do not feature at all and the Botswana trip with Oliver etc gets less time than the floods.

I really was dissapointed that so much was missing because what there is, is very good. Abriding to remove sections of a book that are in the title is ridiculous though. It's also worth noting that this book may not be suitable for younger listeners as there is some bad language.

'Top Gear' with the picture off

There can be little doubt that 'Top Gear' is one of the most popular TV shows of our time, and a key feature of the show, and big cause of it's popularity, are the challenges our three heroes embark upon, each one bigger and more outrageous than the last.

The downside to this popularity is that there can't be too many people who haven't seen the drive through Mozambique, the Dog Sled Race, the trip to India etc, especially nowadays when the 'Dave' channel seems to show back-to-back 'Top Gear' pretty much every day.

And there's the rub with this book, in which Richard Hammond tells his side of the challenges. Problem is, he already did this on the original shows, and so much of this book is like having 'Top Gear' playing with the picture off.

For die-hard fans only...

I absolutely loved it and I love the way richard always narrates his books. my most memorable moment in this book was when he actually got Oliver started again. it was ridiculous. Richard hammond should really write another book about his times in the grand tour.

absolutely hilarious!
I loved every bit and it was very interesting listening to behind the scenes from his point of view of brilliant Top Gear adventures.

enjoyed the book. richard narrated it well. And the music st the mood for the next chapter.

Very well read but where's the rest of my book?

First the good news. Richard Hammond puts as much warmth, care, excitement and enthusiasm into reading this as he does with "On the edge". It is really nice to hear the story in the author's own words as if they were telling you their stories down the pub. You can cry with him at the sad bits and laugh with him at the truly silly things he has done. Richard Hammond is very easy to listen to and I can never fault his way of story telling at that deserves 5 stars. Bad news....Even though it is well read I feel incredibly cheated by the creators of this "audio book". I feel cheated because if I bought a car and it only had 3 wheels when I should have four I would take it back and demand a refund. Same as if a CD of my favorite band's best hits only had 3 I recognized and a whole bunch of "B" sides that never made it past 30 something in the charts, I would take it back and yell and the poor pimply Saturday worker behind the counter. So If buy a book that says " My adventures with Evel, Oliver and the president of Botswana" I would expect it to have those in it. The Botswana story and Oliver feel like they are dealt with in a relatively short story to the Polar adventure which takes up at least double and a bit more. The story of the floods takes up the rest (around about a third or so of the book), and Evel is cut out of the book completely! I know it says abridged, but to cut out a story mentioned in the title (which I was looking forward to listening to) and keeping in the story of how he ran home one night to avoid the floods is UNACCEPTABLE. For that reason I give the story 1 star only....and a disappointed shake of my head.

I have just finished the book and it was superb! Richard showed that he is a man of humour, family loyalty, great friendship and superhuman determination!

His addition to many of the tales we have already (partially as it seems) heard is fantastic.

I found myself at times literally laughing out loud...which is quite strange at 0530 whilst walking your dog!!!