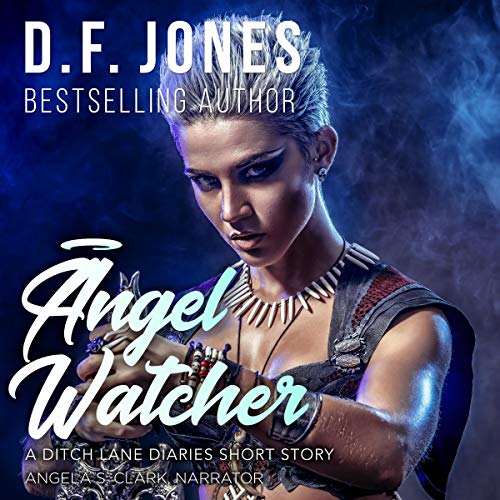 The tremors were faint, but grew stronger, releasing a swarm of quakes when a cataclysmic super-volcano erupts in North America, killing 100,000 souls instantly.

The Angel Watcher, Kaduntz, had been unable to stop humanity’s demise, leaving her heartbroken.

The Angel of Destruction releases the four horsemen.

The age-old prophecies come to fruition.

Decades later, Kaduntz searches for human survivors rumored to live on Campbell Ridge. The moment she locks eyes with the angel hybrid, her world turns upside down.

The touch of his hand sends a jolt of electricity through her whole being, releasing an wonderful scent and reminding her of long ago memories.

Who and what did he want with her?

He recognizes her at once from his dreams. His clan sing songs about the leader of the Angel Watchers, Kaduntz.

The pairing link initiates by the touch of her hand.

Could this legend be his partner for all eternity? Could Kaduntz even love a hybrid?

This is the first book I’ve read of D.F. Jones, and I absolutely loved it! I look forward to reading her other books. KaDuntz is the leader of the angel watchers from fifth heaven that’s cast to earth with Luc, the Morningstar. It is post apocalyptic, after humanity. She is devastated after the event that leads to a shift in the natural order. Mythical creatures, action, and romance is masterfully crafted.

Angel Watcher, an Audiobook by D.F. Jones, is the story of Kaduntz, an Angel Watcher and Cord. She failed to save humanity in the past and now she may have another chance.

This story was narrated by Angela S. Clark who does a good job!!

Enjoyable story that seems to be more of a YA story and not exactly what I was expecting….but, it was good!!

I am volunteering to leave a review for an Advance Reader Copy of this Audiobook.

First, I must say that I have read ALL of the DITCH LANE DIARIES and love each and every one.
ANGEL WATCHER is a peaceful ending (?) to the DITCH LANE DAIRIES and really should be read in order,
I read and reviewed ANGEL WATCHER when it was an email book and loved it then and the narrator Angela S. Clark
did a great job of bringing this story even more alive.
This story began in 1970 and this segment of the series starts in 2070. The world as we know it has ended and a whole
new world has begun. If you have read the DITCH LANE DAIRIES then you will have no trouble following the story line. If not, then I will recommend that these stories be read in order; they are more enjoyable, more complete and more understandable if read in order.
Thank you , D.F. Jones for the many hours of pleasure you have give me with these wonder filled stories and many thanks to Angela S. Clark adding a voice to bring the story more alive.

This was a interesting listen. I wasn't sure what to expect but was very surprised and enjoyed listening to this book. I recommend listening to it.

Short but intriguing story. Loved the characters. Enjoyed the narrator as well. Easy to listen to

Good story with an interesting main character and a storyline that, while short, is satisfying

Too much too quickly

Angel Watcher is A Ditch Lane Diaries Short Story of fantasy romance by D.F. Jones. I haven’t read any of the other Ditch Lane Diaries stories yet, and while I got the impression that this is a very rich world with a wide variety of interesting magical creatures, I found the story somewhat confusing. It’s probably better to read this after reading at least the first book in the Ditch Lane Diaries series, Ruby's Choice: The Dreamer.

I just couldn’t relate to our main character, Angel Watcher/Warrior Kaduntz. So much happens so quickly here, I felt like I had whiplash and never had enough time to develop an emotional reaction to the events of the story. Also, this seems to be a fated mates/insta-lust type romance, which I am generally not a fan of.

This story was just too condensed for me, but if you enjoy short fantasies about war and fated mates, you might enjoy this more than I did.

Angela S. Clark did a fine job with narration. She has a good voice for this story and created distinct character voices. She enunciates clearly and reads at an appropriate pace.

I was provided a free review copy of this audiobook by the author. I volunteered to provide an honest review.