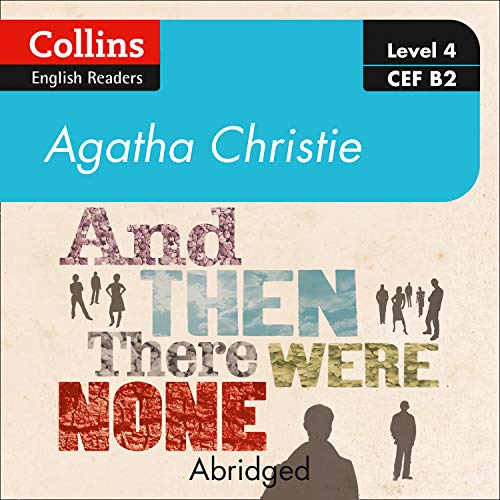 Agatha Christie is the most widely published author of all time and in any language. Now Collins has adapted her famous detective novels for English language learners.

These readers have been carefully adapted using the Collins COBUILD grading scheme to ensure that the language is at the correct level for an intermediate learner.

Ten strangers are invited to a tiny island, each for a very different reason. Over dinner on the first night, a recorded message accuses each of the guests of a serious crime, all of which they deny. Then, by the end of that evening, one of the group is dead. A storm rises – now no one can come or go from the island. Then another dies, and another. The killer has to be one of them – but which one?

And Then There Were Noneに寄せられたリスナーの声

It's a gripping detective story, no doubt about it. The problem with the plot is that the killers plan seems to be too dependant on the unforseeable circumstances (the storm which locks them down on the island, and behaviour of the other guests). That being said, it's hard to guess who the killer is, and I enjoyed the story.

the english in this version is a bit too simplified for my taste, but I chose it over the original because it was shorter by some 2 hours. The narator does a fine job, he is very easy to understand, and even uses slightly different voices for the dialogue of all ten characters, which makes the plot easier to follow.