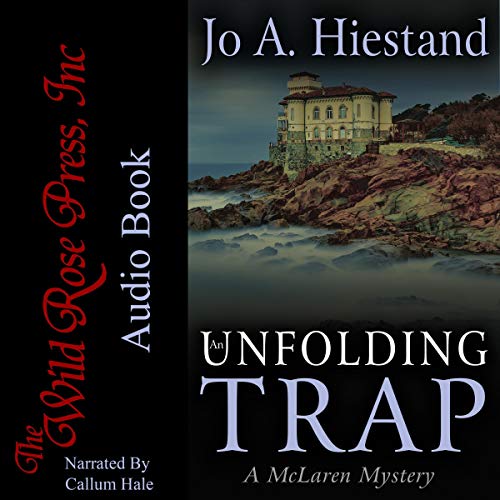 Since infancy, Michael McLaren has been the target of his paternal grandfather’s anger. So, when the patriarch sends an invitation to heal the rift, McLaren travels to Scotland, eager to meet and finally end the feud. But the welcome never happens. If grandfather hadn’t invited him, who had? And why?

In Edinburgh, a man standing beside McLaren in a bus queue is killed in a hit-and-run accident. After an attack leaves McLaren for dead on a wintry moor, he’s convinced someone from his past is trying to murder him.

As McLaren trails the hit-and-run driver from the medieval "underground city" of Edinburgh to the Boar’s Rock, the MacLaren Clan’s ancestral meeting place, the assaults intensify, and he’s plunged into a very personal hunt for a World War II treasure. The puzzle is fascinating; he just has to stay alive to solve it.

I read this book previously and liked it so well I decided to try the audiobook. Audiobooks are not usually my thing. I’m never sure whether it’s my short attention span :) or just having way too many extraneous things on my mind. I tend to read to “run away” and words on a page help me concentrate. When I’m trying to listen, too many things get in my way. This is not true of many people today. They seem to be able to listen while accomplishing other things.

The character of Michael McLaren is just my kind of ex-cop turned P.I. Tough but caring, smart, moody, and always trying to help. But this time he starts out to see if he can meet his grandfather with great trepidation and rightfully so. The experience all turns into a sort of conundrum. One that McLaren has no choice but to solve.

This mystery is set in Scotland and the author describes the countryside and the moors beautifully. I am so very visual that I think audiobooks make it harder for me to picture things at least more difficult than words on a page. But that didn’t happen this time. This time I had the same author who writes captivating descriptive writing combined with a narrator that could make me see those moors. Someone to make me see and hear McLaren’s encounters. Someone to make Hiestand’s characters come to life. This narrator must feel these characters. I don’t think anyone could portray these people so well without becoming them.

So what do you have in this audiobook? An author who writes good mysteries full of great characters and descriptive writing and a narrator who can make them come to life. Definitely worth the time to listen.

As the title says, this was definitely an unfolding mystery. Michael McLaren travels to Scotland at the invitation of his estranged grandfather, however when he arrives he discovers that his grandfather sent no such invitation and wants nothing to do with him. The mystery begins here and becomes more complex as accidents begin to happen and of course McLaren, being the good detective he is, decides to delve into what is going on. The suspense reaches a fever pitch and had me wanting to turn up the speed just to find out what was going to happen next. I am so glad I found this author. Generally I don't listen to murder mysteries because these days they are usually filled with gory content, but this author doesn’t find the need to do that, thankfully. Her main character is likable, intelligent and he isn't a drunk. He is a man who takes charge and usually knows what to do. This book had a satisfying ending that wrapped up all the loose ends. Callum Hale is an extraordinary narrator. The different voices and accents he can change back and forth to is simply amazing. He made listening to this story that much more enjoyable. I have no hesitation in recommending this one!