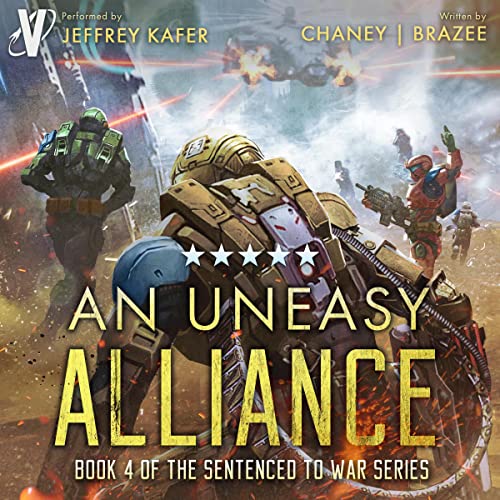 The war is over. Peace has at last descended over the humanity...or so it would appear.

The Centaurs may no longer pose a threat, but a new war is on the horizon, though it hides in the shadows of two empires.

Rumors of alien tech have set governments against each other, and with attention focused on defeating the Centaurs, criminal elements have gotten their tentacles firmly entrenched in the very fabric of civilization.

Staff Sergeant Rev Pelletier of the Perseus Union Marine Corps has now been assigned to the Home Guard, the elite unit made up of members from each military force in human space.

A new age is upon us. An age of exploration, treaties, and new enemies. But with tensions rising, can the Home Guard function as a viable, unified force to combat the growing lawlessness throughout the galaxy?

Rev, Tomoko, Bundy, Ting, and the rest return in this exciting fourth entry in the ongoing Sentenced to War series from USA Today best-selling authors J.N. Chaney and Jonathan Brazee. If you're a fan of gritty military sci-fi action and characters who refuse to quit, you'll love this series.

Like the last three, this one delivers a great ride to the end. It's the start of a new arc, so there's less action and more build up. We have the state set for a rising conflict and new story, but it continues the adventure for our characters. Hoping the next book keeps the momentum and builds the world out more. The characters are great and feel like real people. Loving the relationships. Keep it up!

This is another great book with Rev. Great world building. The politics are interesting and it sets the stage for what seems to be a good trilogy. Another trilogy. Mr Kaffer is great but the moon of enceladus is pronounced inn-sell-uh-dus.. Approximately. That kept throwing me off a bit. A bit of a small gripe but for a Sci fi fan it's an issue. It's like one narrator who kept pronouncing Bogota Columbia as Bo-got-uh. I listen to 40 some hours of Bo-got-uh. Perhaps it's my failing as an American English speaker where Zee is not Zed and I can recognize that failing. So correct me if I am wrong. Or perhaps Siri isn't as good as Google.

I am really looking forward to the next book

yes yes yes baby girl, let me get that sweety, sweet book! I LOVE THIS SERIES!!!

The story is good, the characters are great, and the conflict is intense. The fight scenes in the series are especially well done. Keep the action coming and bring on book 5!

Can't get enough! I hope this series continues for several more books! I love Rev and Tomiko!

I am really enjoying this series. I keep finishing them so fast, that I am constantly looking for the next.

The first book took me a little bit to get into the story but this 3rd? no 4th book in the series I finished almost before I realized it was ending. Onto the next one! Not sure there is a better compliment than to just want more!

Another good, but not great, entry in the series

I continue to dislike the narrator - he drops the tone of most sentences, (like Eeyore), and he seldom differentiates between characters.

Having said that, I'll continue on with the series. Rev is a great character, and I'm enjoying the storyline.

Loved the book, changed a lot from the 3 before but in a good way. Mr Kaffer rocks also

I'm really enjoying this series. Rev proves time and again that he has what it takes to be a hero, but he's still a flawed kid trying to grow up and navigate the world. There's a lot of appeal to this story for vets like myself who like to see a little of ourselves in our mil scifi. The action is great. Solid storytelling and pace with the combat. It all adds together. Hoping we get more action in book 5, though, as this one had less than the last. Keep it up, guys.

not sure what was going on here

drawn out and quite boring. feels like its just filler to make some extra money. i did enjoy the other novels and will listen to the next novel. but will not continue with the series if the next novel is like this boring crap.