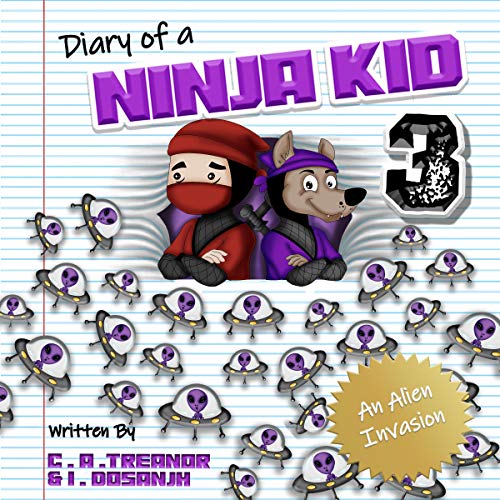 Are you ready for the alien invasion? Sounds like you need the famous mystery antidote!

In the third book of this funny best-selling Ninja Kid adventure series, we get to hear the action of a real 12 year old school ninja, Michael Carter!

Take a peek at what is really going on with the zombie apocalypse and some new imposters!

Michael Carter is 12 years old. If he had a penny for every time people have asked him that when he tells them his story, he would be able to afford his own spaceship!

What is in the giant one that landed at the airport?

It is his job to find out.

With his grumpy sister in tow, fart brother, ninja dog, and three very normal friends, they set out to investigate the very suspicious spacecraft.

Will what they find inside save the Earth?

What will happen when a very suspicious voice starts talking over a radio?

Get ready to hold your nose and dive into an apocalypse of alien farts to find out!

Dig out your clothespin, block your nose, and let’s get stuck in.

Diary of a Ninja Kid Book 3: An Alien Invasion will have any kid who loves ninjas, zombies, and aliens on the edge of their seats. If you have a superhero in training who loves a hilarious action-packed adventure, this story’s a surefire way to keep any young kid entertained.

For an adventure that truly understands what it’s like to be a 12 year old kid, click “Add to Cart” right now.