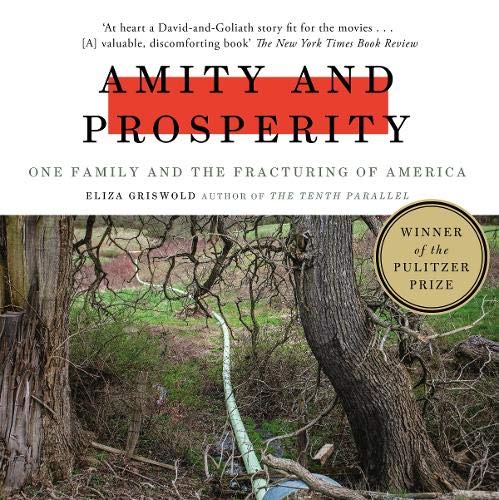 Winner of the 2019 Pulitzer Prize for General Nonfiction

Seven years in the making, Amity and Prosperity tells the story of the energy boom's impact on a small town at the edge of Appalachia and of one woman's transformation from a struggling single parent to an unlikely activist.

Stacey Haney is a local nurse working hard to raise two kids and keep up her small farm when the fracking boom comes to her hometown of Amity, Pennsylvania. Intrigued by reports of lucrative natural gas leases in her neighbours' mailboxes, she strikes a deal with a Texas-based energy company. Soon trucks begin rumbling past her small farm, a fenced-off drill site rises on an adjacent hilltop and domestic animals and pets start to die.

When mysterious sicknesses begin to afflict her children, she appeals to the company for help. Its representatives insist that nothing is wrong.

Alarmed by her children's illnesses, Haney joins with neighbours and a committed husband-and-wife legal team to investigate what's really in the water and air. Against local opposition, Haney and her allies doggedly pursue their case in court and begin to expose the damage that's being done to the land her family has lived on for centuries.

Drawing on seven years of immersive reporting, prizewinning poet and journalist Eliza Griswold reveals what happens when an imperilled town faces a crisis of values and a family wagers everything on an improbable quest for justice.