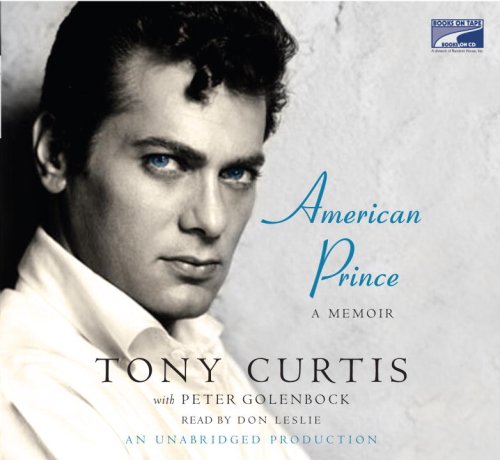 "When you're with Tony Curtis, you're with somebody very alive. He was - and is - one of the most 'up' people I have ever known." (Sidney Poitier)

"For Some Like It Hot, I wanted a straight leading man and a comedian. I was sure Tony was right for it. Tony is so open and animated....It was a huge, wonderful plus for the picture." (Billy Wilder)

"Tony Curtis could have just been the beautiful young leading man, handsome, charming as hell...[but] he wanted to be a good actor, and he's the only guy I know who learned his craft successfully." (Jack Lemmon)

He was the Golden Boy of the Golden Age. Dashing and debonair, Tony Curtis arrived on the scene in a blaze of bright lights and celluloid. His good looks, smooth charm, and natural talent earned him fame, women, and adulation - Elvis copied his look and the Beatles put him on their Sgt. Pepper album cover. But the Hollywood life of his dreams brought both invincible highs and debilitating lows. Now, in his captivating, no-holds-barred autobiography, Tony Curtis shares the agony and ecstasy of a private life in the public eye.

No simple tell-all, American Prince chronicles Hollywood during its heyday. Curtis revisits his immense body of work and regales listeners with stories of his associations with Frank Sinatra, Laurence Olivier, director Billy Wilder, as paramours Natalie Wood and Marilyn Monroe, among others.

Written with humor and grace, American Prince is a testament to the power of living the life of one’s dreams.

Tony Curtis has lived a colorful life, and you'll get to hear about his career and his life at length. It's an interesting listen, not only for the famous people that crowd its pages but for the Hollywood that it depicts.

Since the focus is always on Curtis (and why not?), you won't necessarily get a good sense of chronology. All of a sudden he has two daughters with Janet Leigh, for example, but he never mentions their birth. What comes through most clearly is his charm and ambition, and he is disarmingly direct and unapologetic about all the women in his life. (Let's just say that you won't be able to count or keep track of them.)

This isn't a "change and grow" memoir, where the author hits you over the head with Insights throughout. As he presents himself, Curtis stays remarkably the same throughout his life. He always wanted to be an actor and a movie star, and he never wanted to produce or direct. Because he spent so many years acting, it would be nice to hear more about certain of his movies: HOUDINI is brushed off in a line or two, for example, and THE BOSTON STRANGLER is barely mentioned. Still, this is a good, entertaining book to listen to.

I enjoyed this book!

Although I am not a big fan of Tony Curtis I did enjoy his book. I love the history of the old Hollywood and because I recognized every person he wrote about I really enjoyed that aspect of the book. Curtis certainly loves himself as this book shows but you can't help liking him in spite of himself. I thought the reader was excellent. You really felt it was Curtis himself who was doing the reading.

It was fun to hear the stories about some of the movie stars I recall as a kid and the reader had a voice similar to Tony Curtis' own.
I felt sad for Mr. Curtis....still do..that so much of his self esteem was wrapped up in how many women he could bed down.
Also kind of sad to listen to how his career went down the tubes as he aged. Plus, he lost out in such a big way by not being able to give more of himself to his children. Well,he seems happier now....I surely hope so !

I think one of the best things about this book is that Don Leslie who narrates actually sounds like Tony Curtis so you can easily believe that it is Tony himself telling this life story. Achieving a successful career against the odds, this is a no-holds-barred story that gives an excellent insight into Old Hollywood's studio system where the actors were held under contract and without a good agent could suffer years of poor roles and exploitative contracts.

A colourful character from beginning to end, he talks candidly about his rise to fame, his marriages, family life and tragedies, numerous relationships and "flings", prejudices and achievements. One of Hollywood's true stars and legends. Long live Tony Curtis!

Interesting if a tad repetive

I liked this book - Tony Curtis is an engaging and likeable character, and his description of Hollywood and its stars is more than quite interesting; and as other reviewers have commented, the narrator sounds very like him, bringing the tale more alive. But like a lot of show-biz autobiographies, it gets a little repetitive, and it does lack for variation in pace and tone.

Best if you are a Tony Curtis fan - which I am!