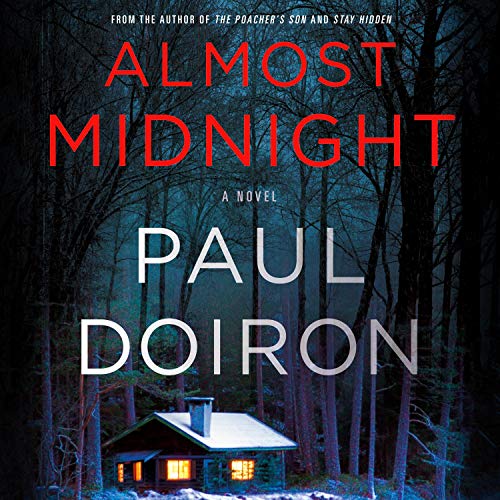 "[Henry Leyva's] understated performance makes even minor characters' motives and personalities believable...Leyva and Doiron are a great combination offering a fast-paced thrill ride with this tenth mystery in the series." (AudioFile Magazine)

Warden Investigator Mike Bowditch already has a troubling mystery on his hands: finding the archer who mortally wounded Maine’s only wild wolf. Then he learns his best friend, Billy Cronk, has been released from prison after heroically defending a female guard from a stabbing. Mike comes to believe the assault was orchestrated by a wider criminal conspiracy. When the conspirators pursue Billy's wife and children to a “safe" cabin in the woods, Mike rushes to their defense only to find himself outnumbered, outgunned - and maybe out of options.

This 10th book in the Mike Bowditch series is a great read. I feel very repetitive in my reviews when I say this can be listened to as a stand alone but I would suggest listening to the series in order.
There are two plots in this story. The first dealing with wolf/dog hybrid that Bowditch (a Maine game warden investigator) had rescued a few years ago from drug dealers. The animal had been shot with a crossbow and still carried the bolt through his chest.
The second plot puts Bowditch's best friend (Billy Cronk's), then his family in danger and ultimately Bowditch himself. Protecting them all proves quite difficult with Billy on prison and his wife and children now almost destitute with out his income.
Both cases come to a satisfying conclusion with a lead in for the next book to build on.
Henry Leyva does a wonderful job narrating.
This series starts with the Poachers Son through to this book, are all VERY HIGHLY RECOMMENDED.
If you found this review helpful please indicate so.
Thank You.

It's was a good book but it seems like he spent a long time on one of the two stories in the book and the other which I thought would be good felt a little rushed to wrap it up. Still a good listen thou.

There was far too much time on the 'dog' story, which is of minimal interest - it was merely filler to get the book to the publisher. Hopefully a good story and good writing will be back soon.

What a great story. Reading a Doiron tale is like settling down in a nice cozy chair and getting lost in the world of Mike Bowditch. Such a great character and who doesn't love the other recurring characters. Billy and his whole family, Charley and his wife and Shadow, the wolf dog. Two stories running here and a host of problems to solve. Prison corruption, Billy needing help, trying to untangle his own love life as well as saving Shadow. Just an all around great read.

My God man!!, absolutely can't stop listening, amazing stories, some of the best endings that just make me smile,keep up the good work 👍

Being from Maine, I loved this book. Some great lines & references. The adventures of Mike Boditch are always exciting and this is no exception. I highly recommend it.

One of the best

I never get tired of Mike Bowditch and all his friends. Can't wait for the next adventure!

I have been loving the Mike Bowditch novels since the first one!
Doiron writes about characters and locations and cultures so realistically you feel you’ve been there and know the people

It’s not over the top Jack Reacher stuff, it’s the realism and drive in the characters like Mike Bowditch that make for such an intense read that leave you really invested in the characters, the Warden service and the state of Maine

And who wouldn’t want to know a real Charlie Stevens???

Can’t wait for what’s next!