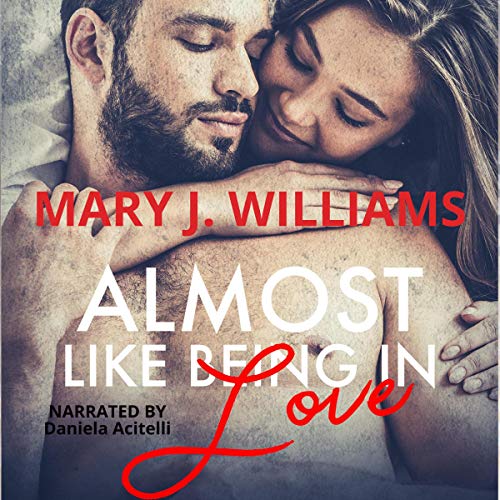 A major case of unrequited desire.

One week to scratch the itch.

Jedidiah Tillman, a.k.a. Tilly to his friends and anyone who wants to keep his teeth, can’t get Kai Northam out of his head. Five years, three face-to-face meetings, and a frustrating amount of long-distance flirting later, she’s ruined him for every other woman.

Kai doesn’t believe in happily ever after. However, she wants the very drool-worthy Tilly more than any man she’s ever known. To satisfy them both, she proposes one week, alone, away from the real world. No rules, no distractions.

Tilly is about to have the best Christmas ever. However, when his seven days with Kai are over, will he be able to convince her what they have is more than a holiday fling?

What happens when two warriors wage the most dangerous battle of all? An all-out fight for their hearts?

Almost Like Being in Love is a stand-alone Rock & Roll Forever novel.
Grab your copy today.

I'm so happy that Tilly got his romance. It's been a while since I listened to the other books in the series. It was nice to get drawn back into their world. There was "romance" (lots) and action. The narrator is easy to listen to and shows lots of emotion in her voice.

Mary J Williams comes through again, with a novella for her Rock and Roll Forever series. This one doesn’t feature the band members, but we do get cameo appearances them. We do get a fantastic couple. Jedidiah aka Tilly, a former Marine has taken a job for Beckett. Though retired, he never forgot the one woman who got under his skin, Kai. She as his commanding officer, and he never acted on his feelings. Kai, a civilian now too, the two have kept in touch. Now, it’s Christmas, and Beck is sending Tilly away for 10 days to France and who is there? You guessed it. What a fantastic short this one is. The story is fun, and the chemistry is hot. Williams finishes out this series with a bang, letting us enjoy a romance smoldering for years until the flames burn hot. And we get to spend New Year’s with our favorites from Razor’s Edge. It’s a great way to bring the story to its end, though I can definitely see some spinoffs in the future!

Daniela Acitelli brings this entire series to life and finishes with fantastic narration. She is this series, each band member with its own voice, and now gives her talent to Kai and Tilly. She knows exactly how to tell this story, giving all the heart string pulls and passion.

Mary J. Williams does it again, she writes another awesome story for her “Rock & Roll Forever” series. This is may be more of a novella sized book but managed to fit a lot of story into it. This story is Jedidiah “Tilly” Tillman’s story, a former Marine who took a job working for Beckett, a housekeep plus a number of other skills. While serving the Marines he had a thing for his his superior officer, Lieutenant Kai Northham, a smart, kickass woman and completely forbidden so he kept his feelings to himself. I loved the chemistry between them and their season greetings to each as they spend the holiday together and dodging bullets. Both left the service and went on to live civilian lives, but they do have a chance meeting several years later and it almost happened for them then but she got called away for an assignment she was working on. They kept in touch but for some reason Tilly was afraid to tell her how he felt about her. Just before the holidays Beck & Sawyer present him with a ticket to France for a 10 day escape in a private cabin in an exclusive resort. With much convincing he goes and is completely surprised by who is there, Kai Northam. I loved how their story plays out, it is a love story ten years in the making. Also loved catching up with what the members of Razor’s Edge are up to. After binge listening to the series this book was the perfect cure for a book hangover, it is always sad when a series comes to an end, hopefully it is only the end for now, would love to hear more about these great characters down the road. Mary J. Williams thank you for another enjoyable and entertaining story.

Daniela Acitelli is a terrific narrator and voice artist. She continues to bring these characters to life and their story to life. She is a natural talent and it is amazing how she grasps the heart of these characters, humanizing them and capturing their emotions. She is an entertaining storyteller and a pleasure to listen to. Thank you for another awesome listen🎧

This was a short but sweet ending to a great series, with my favourite housekeeper.

amazing fantasy of taboo love brutality ,lies that I just could NOT get enough of this naughty little morsel a tasty little treat
here's a fun quickie to ignite your fire
This filthy-sweet treat

The passing of time only strengthens their love

I am so glad that Tilly got his own HEA. We first met him in Beck and Sawyer's story and this book begins 10 years previously. I enjoyed the storyline very much and it fitted in so well with the whole series. Highly recommended.

rolled out the red carpet, cordoning off the area and seizing control, throwing this baby into the eye of the storm, breaking it down, blowing it into a tailspin with a shocking culmination. A throng of vexing shenanigans and a bevy of turbulent events running rampant, propelling this bad boy to life beautifully. Intense drama, thrumming tension, electrifying suspense and fierce danger spirals, as intrigue skyrockets, melding this baby together seamlessly. Add distress and turmoil along with perplexing situations and a boatload of trouble, propelling this little fella to staggering heights. Meting out striking, well rounded scenario's, Electrifying, dark and delicious! I devoured every tantalizing word..."
overall of five-star read the narrator brought the story to life