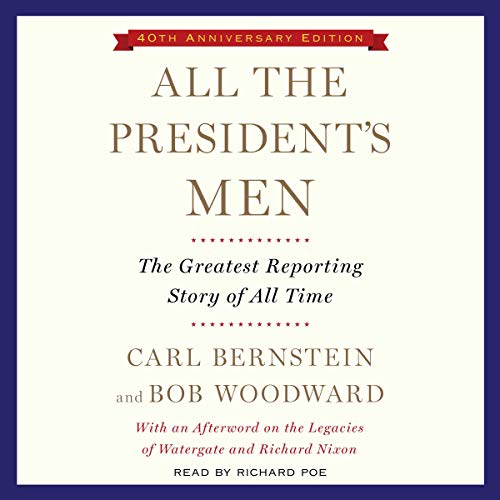 "An authentic thriller." ( The New York Times)
"Much more than a 'hot book.' It is splendid reading...of enormous value.... A very human story." ( The New Republic)
"Exhilarating and candid...trip-hammer reportage." ( Publishers Weekly)

Beginning with the story of a simple burglary at Democratic headquarters and then continuing with headline after headline, Bernstein and Woodward kept the tale of conspiracy and the trail of dirty tricks coming - delivering the stunning revelations and pieces in the Watergate puzzle that brought about Nixon's scandalous downfall. Their explosive reports won a Pulitzer Prize for The Washington Post and toppled the president. This is the book that changed America.

Disturbing. But we knew that.

The narrator was brilliant. You could even hear a bit of Dick Nixon in his voicing of Nixon's words.

Listening to this in July of 2016, I can see the effects of Nixon's paranoia still deeply entrenched in the GOP to this day. And now the bleed over to the far left. "Blame the press" was the Nixon White House's primary line of defense. I am struck at how this correlates to the far left and the mid to far right.

If you can't win on facts, blame the messenger. Unfortunately, it is far more effective now than it was then

We need fewer amateur bloggers and more pros like Bob and Carl. Pros that are committed to getting it right. Pros that see "the competition" getting today's scoop as confirmation of yesterday's, and tomorrow's, stories.

This should be required reading/listening for every voter, every four years.

I had forgotten all that really happened...

I had forgotten how much nasty stuff really happened during Watergate and the truly great work that Woodward and Bernstein did. This is a great read and very well narrated by Richard Poe. Anyone interested in history and an amazing true story should refresh with this one.

THE FUMBLING OF AN ASSUAGED

At high school mid to late ‘70s I was really keen on reading mostly books on which movies were based. For example “One Flew over the Cuckoo’s Nest”, “Marathon Man”, “Black Sunday”, “The Omen”, “Zorba the Greek”, “To Kill a Mocking Bird” and the book under review. And then I’d read only to make me understand these movies, all of which were in my 2nd language and spoken very hastily.

Then reading “All the President’s Men”, I didn’t have a clue whatsoever as to what it was all about. I was in my mid-teens, on the tip of Africa and knew absolutely nothing about the inner workings of US politics. Upon lending this book to a school friend I asked him what he thought of it (although I myself wasn’t capable of forming any such opinion): “Boring” he said, “like reading a newspaper.” I retorted: “But they ARE newspaper men!” To which he replied “Ok, small wonder; now it makes sense.” My friend obviously knew a little more about form than content.

Listening to this book now refreshed my memory; almost therapeutically allowing me to relive and reconstruct past events―like cheating on myself by only now allowing myself to understand more in retrospect than what had as a teenager been completely incomprehensible to me.

In conclusion allow me these seemingly insignificant acknowledgements. I'd often enhance my vocabulary by jotting down words the meanings of which I didn't know and consult a dictionary. Two of the abovementioned books in their very opening lines already contributed to my vocabulary. Harper Lee’s “Mocking Bird” taught me the word “assuage” and Messrs Woodward and Bernstein gave the word “fumble”. These contributions to what I regard as my intellectual development (political enrichment notwithstanding) I still cherish and am most grateful for even now as an adult, more than 35 years down the line. "The Child is the Father of the Man"—William Wordsworth.

The performance is fantastic and the work of Woodward and Bernstein demonstrates the need for a vigorous free press.

This is the kind of non-fiction book that is truly unbelievable despite ones’s previous knowledge and the detailed accounts of the facts. Amazing story by outstanding writers!
When it comes to audiobooks, narrators can be divided into two groups: the ones that read and the ones that perform. Richard Poe is one of the best performers I have had the pleasure to listen to.

Better than a Hollywood suspense movie, and it did happen !. Amazing how the American democracy defended itself from destruction from the inside.

just what you would expect, the political horror story of the 20th century told by our premier journalists. gripping, interesting, a story you must be familiar with if you vote. the book goes quickly and everyone will learn something. the movie was great too, but the extra detail is important.

When I write reviews I like to look at each book as if I know nothing about the subject.
The story of Watergate is dramatic and exciting. The narration of this book is perfect and well worth your time and credit.
Going any further then that in today's world is a difficult task Let me end by simply stating that this book is and will be timely for the foreseeable future.

This book shows what happens when people in power will do anything to stay in power at any cost. It’s a shame that real journalism such as this and the pentagon papers reports don’t exist anymore. Today’s journalism if you can call it that is all garbage. Anyway everyone should read this because it is truly a great book

Truly worthy of its acolades.

Would you listen to All the President's Men again? Why?

I have a deep interest in the life and times of Richard Nixon.

The narration appropriately recognised the gravity of the situations unfolding as the book progressed.

politics is a shabby game.

surprised that it took so long to arrive in the audible collection. the wait was worth it: a compelling account of an extremely interesting periond in american history and politics, and the narration was of a standard worthy of the quality of the book.

Where does All the President's Men rank among all the audiobooks you’ve listened to so far?

Right up there. 5 stars.

What was one of the most memorable moments of All the President's Men?

The whole thing is memorable. Tense, intriguing and exciting and of course, very concerning.

It was perfect. Clear and easy on the ear, it's read with an unhurried authority and weight that matched the seriousness and tension of the tale.

It's pretty breathtaking and heartbreaking too. It also makes you wonder who the new Woodward and Bernstein's would be these days and if any newspaper or publisher would have the belief and balls to stand by such reporting. The Washington Post folk were heroes.

I wasn't sure about getting this audiobook as I was already familiar with the story but the writing style and narration is so fascinating from the get go that I was hooked and cannot wait to recommend this to everyone I know. The 12 hr book just flew by without ever outstaying it's welcome. It really was excellent. Go listen!

The classic book of the two reporters from the Washington Post, who against all odds battled through the lies to get to the truth about Watergate and the cover up that took down the Nixon White House. An amazing piece of history, excellently read and the change in voices are very good.

Could be a touch louder

Story is amazing, and it really goes into details both about the posts initial investigation like the film, but also covers the rest of it after... Only gripe would be the sound was a bit low at times.with so many names that are familiar sounding, you really need to hear who they are discussing at that particular moment.

Thoroughly enjoyable. The similarities between Nixon's WH and Trump's are evident. The mismanagement, disinformation, downright lies and general incompetence.

If you enjoyed Pakula/Redford's film, do give this version of the book a listen.

And you thought 2016 was interesting

One of the classic pieces of investigative journalism. A must read for anyone interested in how power corrupts.
The standard question in future history exams will be: The 1972 and 2016 US election campaigns, compare and contrast.

Political classic bang up to date

This is a classic that helps to explain the current American political situation. To understand today listen to yesterday.

Unfolds as one of the great detective stories of the modern era., as Washington post reporters Woodward and Bernstien uncover an unprecedented scale of criminality that leads ever closer to the President of the USA Richard M Nixon. There is a moment when Woodward hears an account of Bob Haldman talking of dumping incriminating evidence into the Potomac when the full horror of Nixon's White House becomes clear to him. Nixon's fall less a Shakespearean tragedy than on a par with Brecht's Arturo Ui.

History at its finest

I really enjoyed this version of the book. Poe's voice lends itself beautifully to Woodward and Bernstein's novel. 100% recommend.

Although the events took place over 40 years ago the lessons regarding the use and abuse of political power are still relevant to this day. Perhaps, more so? It is also a book about the checks and balances in a properly functioning Democracy, if that Democracy is functioning as it should - always for the better of all it's citizens. The measure of a good Society is how it's citizens at all levels of that Society act toward each other. One important function is to have a free and unfettered Press and Media. Woodward and Bernstein remind us that Government is by the people and often those who can have a voice - the Media as a whole mostly - can make that voice be heard. I greatly enjoyed this as an audiobook after having read the print version decades ago.

Seemed to finish suddenly, a lot of detail in the book though. v interesting. worthwhile read