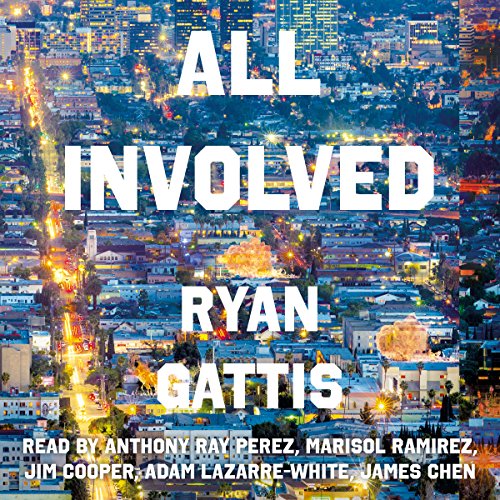 "All Involved is a symphonic, pitch-perfect, superlative novel. It swallowed me whole." (David Mitchell, author of Cloud Atlas)
"[All Involved] is overwhelmingly physical. It winds you in the gut and blasts you in the brain… Several days on from reading it and I'm still reeling." (Independent)
"This novel is so blood-soaked that if you sprayed it with luminol, it would glow like a beacon" (Sunday Express)
"An ambitious novel’ (The Sunday Times)

In All Involved Ryan Gattis weaves a heart-stopping narrative from the perspectives of characters whose stories of the riots were never told. In six sections, each covering a single day, we follow the intersecting lives of 17 people: gang members, firefighters, nurses, law enforcement officers, and graffiti artists, every one changed for ever.

Though the events of All Involved are fictional, every word is infused with authenticity and intimacy. A propulsive and ambitious novel as electrifying as the television seriesThe Wire, this is a mesmerizing epic of crime and opportunity, race, revenge, and loyalty.

Would you listen to All Involved again? Why?

Yes, it was an engrossing listen with realistic and complex characters. I'm sure than one would uncover more insight into the story and characters on an additional listen.

What was one of the most memorable moments of All Involved?

For me the most memorable moment was how Payasa, Ernie's sister, reacts when she sees his body and covers his face. This moving scene demonstrated the love that she has for her brother, and reflects her humanity beneath her "tough guy" exterior.

Which character – as performed by the narrators – was your favourite?

Gloria was my favourite character, as she was the one that I identified with the most.

I was hesitant when I purchased this book, but soon found myself engrossed by the story. It is a great listen and was well worth the credit. The narrators all did an excellent job.

So glad I read this book

If you could sum up All Involved in three words, what would they be?

What was one of the most memorable moments of All Involved?

Reading a line that revealed the age of one of the characters.

The accents & excellent dramatization add to the books authenticity/believability.

I couldn't put this down. Looking forward to Ryan Gattis next book.

Starts slow and felt a bit cliqued, but once it got going I found myself not wanting to stop listening. The different characters jump off the page, they were the strength of the book. Definitely some moments when I rolled my eyes (brain tumor? Really?) but overall would recommend

Come at the king, you best not miss.

I feel somewhat duped with this one after I read the publisher's summary, in particular "A propulsive and ambitious novel as electrifying as the television seriesThe Wire, this is a mesmerizing epic of crime and opportunity, race, revenge, and loyalty."

As a self confessed wire fanboy this was enough for me to give it a go. However, It was a hard slog with very little reward for me. Firstly I must mention that this isn't really about the Rodney King L.A riots, this is the back drop to the story of south central cholo gang warfare and revenge. Which itself is still an exciting premise but something just doesn't quite work for me. I felt the characters were for the most part very similar with very little to differentiate between them and at times came across as stereotypes and caricatures.

Unlike the wire, all the pieces did not matter. Sections of the book that at the time appeared to be leading somewhere ended up being mostly redundant filler.

I've not read many books that touch upon this subject matter and this hasn't put me off despite its shortcomings. There are great moments in the book but the wire comparison was a kiss of death for me, perhaps if it weren't for this I wouldn't have had such high expectations and would not have judged it so harshly.

Just didn't do it for me - suitably atmospheric but didn't seem to go very far, very quickly (I quit half way through ).

Well, it's not a bad book, but it's not a good book either. I haven't completed it yet but already i feel I can write something about it. Set during a riot in Los Angeles this book might be set anywhere during any six days of any month, week or year. I don't feel connected with this book at all. It's a drama and the writing is appalling but then told in the first person it's likely that the characters did talk the way it's written. There's a lot of plain talk and expletives so if you're squeamish about that kind of thing don't read this. The book feels like it's a movie set minus the extras. There's really nobody about and no resistance to the events narated. You feel remote from it all and the rioting is merely incidental to what would have or could have happened anyway. No I'd never read another book by this author again. The narators do a pretty good job though with all the Spanish, at least i think they do. I don't speak spanish myself.