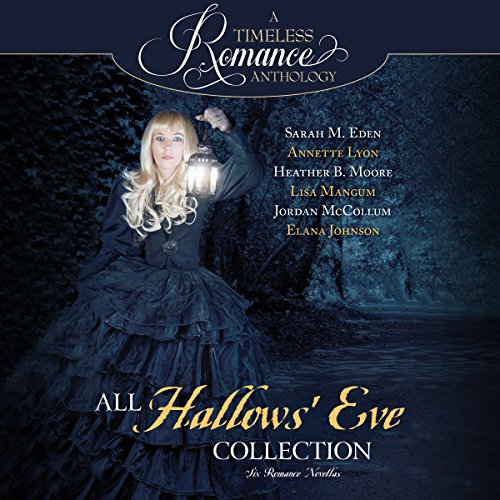 Another addition to the popular Timeless Romance Anthology series. All Hallows' Eve is not to be missed. Romance, thrills & chills. Need we say more?

In Sarah M. Eden's mysterious novella Of Ghosts and Gardens, if Enid Pryce has one downfall, it's that she talks to the ghost in her garden, which doesn't make her too popular among society's elite. In fact, she returns to her home in Wales after a Season in Bath with not one offer of marriage. Deeming herself a failure at the nearly-spinster age of nineteen, she is pleasantly surprised when an English gentleman shows up in her garden, apparently intent on finding out more about the ghost. Burke Kennard, grandson of an English marquess, quickly becomes utterly charmed by the young Welsh woman, but the ghost in the garden is more likely to push them apart than pull them together.

In Annette Lyon's enthralling story It's You, when Charlie and Anna both see the ghost of Nanny Mae, they think they're losing their minds. Anna tries to find out more about the ghost and uncovers a decades' old family secret. One that separated two people in love. Now, the ghost of Nanny Mae must set her wrongs to right. As Charlie and Anna explore the past, and the truth of what happened, they discover that the mistakes of the past might lead to love of the future.

In Sophia's Curse, a suspenseful novella by Heather B. Moore, Joan grows up in an abbey in France, believing that she is an orphan. A chance encounter with the foreboding owner of a neighboring estate, alters everything she's understood about her parents. She discovers she's an integral part of changing a decades-old curse, and that her life, as well as the handsome and intriguing Simon Rousseau's life, are both in danger unless she makes an enormous sacrifice that will change the course of her dreams.

In Lisa Mangum's haunting story The Sirens' Song, we meet recently widowed Oliver, the lead physician on a luxury cruise liner traveling to Greece. He hopes that the change of scenery will help ease his grief over his deceased wife, Cate. After falling overboard, though, he is captured by a siren and taken to a mystical island. Through the sirens' song, Oliver is able to relive his memories of Cate - both the good and the bad - as long as he gives away his memories of her. But can he sacrifice his best memory in exchange for one last chance to say good-bye?

In Jordan McCollum's thrilling novella The Man of Her Dreams, homicide detective Alexandra Steen dreams about real murders before they happen, seeing the crime through the eyes of the killers. But the dreams never contain enough clues to save the victim before it's too late. Then one dream ends before a murder occurs - in a place she knows. She finds herself racing against time to prevent the deadly act, only to discover that the intended victim is a man she thought she'd never see again.

The first story, set in Wales, was very well read and a charming story. The subsequent stories were not particularly well written and the narrator did not really differentiate between the characters voices. This one is being returned.

diverse but so entertaining

i loved it! all the stories are short sweet and entertaining. a very good listen!

Hauntingly beautiful stories that I really really enjoyed, filled with romance and mystery. The narrator brought them to life.

A must read or listen to

WHAT IT'S ABOUT
Six stories, three historical novellas and three contemporary novellas, all with romance, thrills, and chills.

MY TAKE
The narrator, Emily Sutton-Smith did a good job with the voices and accents.

In Sarah M. Eden’s OF GHOSTS AND GARDENS, I loved how Enid and Burke fell in love while researching the ghost.

In Annette Lyon’s IT’S YOU, Charlie and Anna both are drawn together when they both see the ghost of Nanny Mae, but they have to solve a mystery together too and fall in love in the process.

In Heather B. Moore's SOPHIA’S CURSE, Joan is cast aside by her father after the death of her mother, but it's part of a family curse. But she's brought back, along with Simon Rousseau, to end it.

In Lisa Mangum’s THE SIRENS’ SONG, I wasn't sure if I was going to like what happened to recently widowed Oliver, the lead physician on a luxury cruise liner. But the ending is sweet and shows that love really is eternal.

In Jordan McCollum’s THE MAN OF HER DREAMS, homicide detective Alexandra Steen dreams about real murders before they happen. She's pulled back to an old boyfriend when she starts dreaming of his death.

Elana Johnson’s THE GHOST OF MILLHOUSE MANSION has the feel of Heaven Can Wait. I really enjoyed Naomi and Colt.


I did wonder in the last story why the family chose to stay in that house if the parents were so afraid of the ghost.