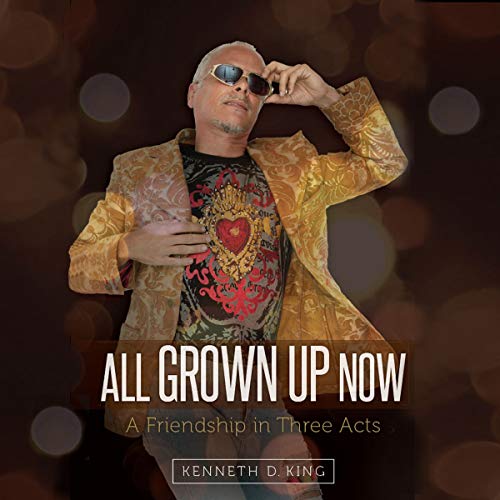 All Grown Up Now is an autobiographical novel about one man's journey from being a green kid in Oklahoma to being "all grown up now".

Two gay men in early 1980s Oklahoma find themselves in a lifelong friendship that transcends the simple label of “friends”. When domestic violence tears their world apart, a desperate act sets the course for healing and a profound new outlook on life. A tale of retail, revenge, reinvention, reckless behavior, and really good clothes, Kenneth D. King’s debut is a rollicking coming-of-age story.

Growing up as a young gay man in Oklahoma City, the capital city of Places to Not Grow Up Fabulous In, King is designing Barbie dresses by the age of four and knows that his destiny lies as a fashion designer in The Big City. Which Big City isn’t necessarily named - it is more of an ideal, where pageantry, fabulous parties, and beautiful clothes are the staples of life. Working tirelessly to graduate from college with a degree in fashion merchandising, he takes his first job as a window display designer, where he meets colleague Mark and strikes up a friendship that will change them both forever.

When Mark moves with his significant other, Victor, to San Francisco, he takes a job as a display manager for a chain of stores and hires Ken. Big City, here he comes! But Mark and Victor keep a dark secret of spousal abuse that strains the friendship to its limits. But when Mark needs to be rescued, Ken is there to execute an intricate - and dangerous - kidnapping to save his friend. What he doesn’t fully realize, however, is how dramatically that act of friendship will change the course of both of their lives.

Beginning as a collection of stories that helped King make sense of an important, tumultuous friendship in his life, this riveting, nonlinear depiction of their relationship and the tragic pain caused by domestic violence is as heartbreaking as it is hilarious.

All Grown up Now: A Friendship in Three Actsに寄せられたリスナーの声

I absolutely loved this book and experienced varying emotions from outright laughter to tears.

loved it, & now listen to his fortnightly pod cast

A well known couture designer, author on sewing and insparational teacher Kenneth D. King takes us on a journey from his adolescence through to being "all grown up now".

I really enjoyed this book! An amazing memoir that is laugh-out-loud funny, and also deeply poignant, and at times I felt I was crying along with Kenneth. But there is a message here, probably several actually, and they are worth hearing and learning.