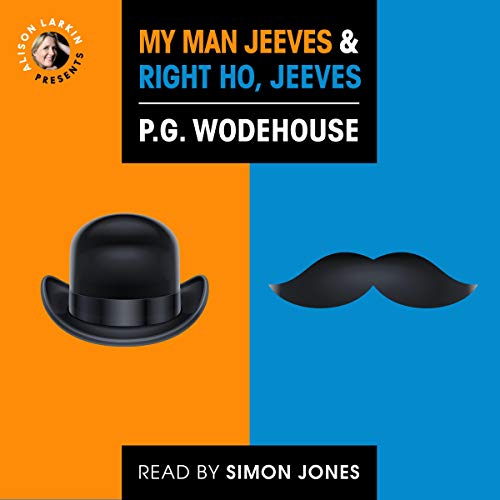 In this special double bill narrated by AudioFile Golden Voice Simon Jones, My Man Jeeves and Right Ho, Jeeves are brought to dazzling new life by an A-list narrator at the top of his game.

Neil Gaiman once asked Douglas Adams who his literary inspiration was for The Hitchhikers Guide to the Galaxy. He said ‘’P. G. Wodehouse, but nobody ever notices". So, with a tip of the hat to Adams’ genius, we present his friend, Simon Jones (aka the original Arthur Dent), reading Wodehouse.

My Man Jeeves first introduced the literary world to Bertie Wooster and his valet, Jeeves, in 1919. Right Ho, Jeeves was published 15 years later in 1934 and finds Bertie and Jeeves installed in the home of Bertie’s formidable Aunt Dahlia.

Not Quite Right Ho, Jeeves

I’d planned on begging Ms. Larkin to continue recording Wodehouse, especially novels like “Heavy Weather”, “Leave It to Psmith”, “Cocktail Time” and “Do Butlers Burgle Banks?” superb readings of which somehow dropped out of sight when the world went digital. And I was going to ask her to make sure Simon Jones was always behind the mic. Then, at the beginning of Chapter 6 of Right Ho, Jeeves, I sensed something was missing: Chapter 5. Gaps are fatal for any recorded book, of course, but especially so for an author like Wodehouse, whose works stand or fall by plot. True, it was a treat to hear the stories featuring Bertie Wooster’s prototype, Reggie Pepper, and as a reader Simon Jones approaches the Davidson/Sinden/Cecil class. But the omission of Chapter 5 is a dealbreaker. Not only is it vital to the rest of the story, it also chronicles one of the funniest series of mistakes and misadventures in all of the Master’s canon.

One of the better Jeeves and Wooster narrations

For me, audible versions of Wodehouse live and die on the back of the narrator’s ability to sound like both an upper class idiot and a genius butler. Simon Jones manages this! These are classic stories and it is wonderful to hear them interpreted by someone who isn’t hiding an American accent or who doesn’t appreciate the need to bring a bit of over-excited breathlessness into poor Bertie’s story telling. A great rendition.