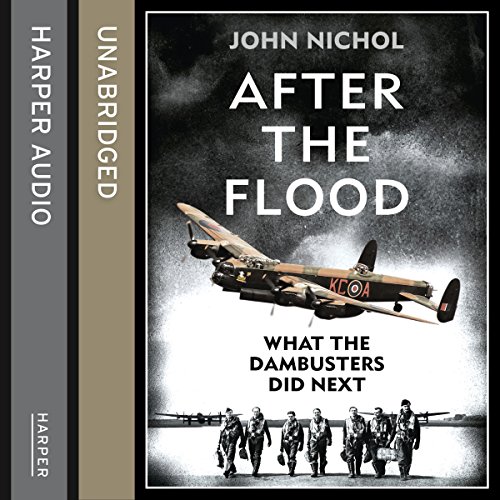 "Full of poignant episodes.... A fitting tribute to the raw courage of these young men." ( Daily Express)
"A truly epic tale of courage and sacrifice - an intensely moving epitaph to the men of Bomber Command." (Andy McNab)

Former RAF Tornado Navigator and Gulf War veteran John Nichol sets out on a personal journey to discover what happened to 617 Squadron after the flood.

The role RAF 617 Squadron in the destruction of the dams at the heart of the industrial Ruhr has been celebrated in book, magazine and film for more than seventy years.

On 17 May 1943, 133 airmen set out in 19 Lancasters to destroy the Möhne, Eder and Sorpe dams. Fifty-six of them did not return. Despite these catastrophic losses, the raid became an enormous propaganda triumph. The survivors were feted as heroes and became celebrities of their time.

They had been brought together for one specific task - so what happened next? Of the 77 men who made it home from that raid, 32 would lose their lives later in the war, and only 45 survived to see the victory for which they fought.

Few are aware of the extent of the Dambuster squadron’s operations after the Dams Raid. They became the ‘go to’ squadron for specialist precision attacks, dropping the largest bombs ever built on battleships, railway bridges, secret weapon establishments, rockets sites and U-boat construction pens. They were involved in attempts on the lives of enemy leaders, both Hitler and Mussolini, created a ‘false fleet’ on D-day which fooled the Germans, and knocked out a German super gun which would have rained 600 shells an hour on London.

In After The Flood, John Nichol retraces the path of 617 Squadron’s most dangerous sorties as their reputation called them into action again and again.

After the Flood: What the Dambusters Did Nextに寄せられたリスナーの声

A great tribute not only to 617 Squadron but to all of the brave aircrew who went out night after night to fight for freedom. Again I note despite the many lives lost and destroyed through the conflict as soon as they were of no further use they were cast aside by the politicians and it took years for their sacrifice to be acknowledged.

Like another reviewer I feel I have to share my disappointment in this audio book. It was not the fault of the narrator, but I started counting the number of times that the author said however!!

Another excellent book from John Nicol

John Nicols books really connect with the stories of the men who did tremendous things. Everyone of these stories should never be forgotten. Lest we forget.

I must confess that I anticipated this would be very interesting but I hadn't anticipated just how much. Both the book and the narrator were superb. Truly is one of those books you find yourself sat in the car listening to even though you arrived 10 minutes ago!

This is an exceptional book and the narration is of a similarly high quality.

It goes into just the right amount of detail into the raids of 617 Squadron - both famous and less so - as well as providing an insight into the family, social and professional lives of the aircrews.

The Dambusters raid was just one, and possibly not the most the amazing. What bravery, what sacrifice, what skill, what invention in the fight for a free Europe. I tip my hat to all at bomber command.

so nearly gave up

I so nearly gave up on many occasions trying to listen, it was spoilt by Mr Nichol trying to do impressions and accents, I found it difficult to concentrate when he went off with imitations, in my opinion it would have been so much better had he just narrated in his own voice

Having struggled to listed through this book I feel compelled to share my disappointment.

Having only just finished listening to The Last British Dambuster I feel this work 'borrows' far too heavily from Johnsons account of the Dambuster raid.

I'm sorry to say the accents used to provide a distinction between the narration and quoted accounts are terrible. Johnson was born in Lincolnshire but the voice actors accent swayed from Yorkshire to something resembling Australian.

The book summary and title offered so much promise but the execution, in my opinion, could alomst verge on plagiarism.