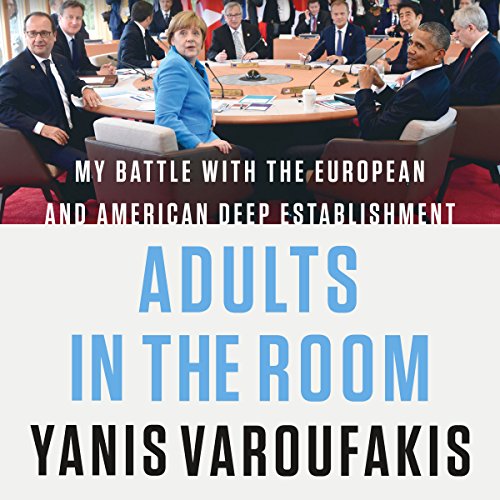 "Leighton Pugh narrates this work as if it were an unsolved mystery...In a voice of nuanced emotion, Pugh creates muted characters to paint a vivid picture of what the author was up against as he tried to save his country." ( AudioFile Magazine)

A number one Sunday Times best seller transformed into an illuminating, dynamic audiobook.

What happens when you take on the establishment? In Adults in the Room, renowned economist and former finance minister of Greece Yanis Varoufakis gives the full, blistering account of his momentous clash with the mightiest economic and political forces on earth.

After being swept into power with the leftwing Syriza party, Varoufakis attempts to renegotiate Greece's relationship with the EU - and sparks a spectacular battle with global implications. Varoufakis' new position sends him ricocheting between mass demonstrations in Athens, closed-door negotiations in drab EU and IMF offices, and furtive meetings with power brokers in Washington, DC. He consults and quarrels with Barack Obama, Emmanuel Macron, Christine Legarde, the economists Larry Summers and Jeffrey Sachs, and others as he struggles to relieve Greece's debt crisis without resorting to punishing austerity measures. But, despite the mass support of the Greek people and the simple logic of Varoufakis' arguments, he succeeds only in provoking the fury of Europe's elite.

Varoufakis' unvarnished memoir is an urgent warning that the economic policies once embraced by the EU and the White House have failed - and spawned authoritarianism, populist revolt, and instability throughout the Western world. Adults in the Room is an extraordinary tale of brinkmanship, hypocrisy, collusion, and betrayal that will shake the global establishment to its foundations.

A must-listen for anyone interested in current events and the delicate web of global economics.

A glimpse of a grim future

Words fail me to describe how this book manages to not only describe the fate of a state and its neighbours surrounding the Mediterranean ocean, but also how the acts of some threaten to destabilize not only the European zone, but that of the whole world should their wager collapse. A wager based on the enslavement of some people and their states, resembling that of an invading state.

However, I can also see how difficult it is for people to rise towards this invading power, since they do not come with guns and tanks, but with means to cripple a country's economy and shackle their politicians.

Hopefully this book will serve as at least an eye opener for some to take action towards the harm being done to democracy in our world today. Because we are alive, everything is possible.

A bit one sided, but a very enlightening, thorough
account on Greece’s finance crisis.

The best listening book ever

This has been the most enjoyable book to listen to ever. The author gives play-by-play chronological account of the Greek radical left government's negotiations with the European troika in 2015 to re-structure the Greek debt. This book "listens" like a thriller or spy novel, it kept me on the edge of my seat. I could not put it down and I listened to the whole thing straight through, till wee hours of the morning. I was extremely disappointed that the book ended. What the book has to say about how the key EU institutions function will blow your mind, including the fact that the all-powerful European Commission [which is part of the troika] is completely and utterly subservient to German interest to which it is both a fig leaf and a door mat. You will be blown away to find out the Europe is run not by democratically elected institutions but by so-called advisory bodies where all the power is held and all members are "graduates" of Goldman Sachs.

The huge downside is that now I am pessimistic about being able to find an audio book that will keep me as captivated as this one. I listened to quite a few audio books and I can tell that chances of that happening are very small. My biases? - I have been extremely interested in the subject of Greek debt as I think it is and will continue to be among the most significant political and economic stories of our time. The fate of Europe and its democracy, and by extension the fate of the entire world, will for generations be shaped by how the Greek crisis will eventually be handled. That said, [and Varoufakis will tell you this himself], the story of the Greeks is by now over as it is indeed just beginning. We now have DEM 25, an all European democratic party that might save and remake Europe forever. Hope this review was helpful. Best, JL

Very interesting but listen with caution.

Varoufakis is an intelligent man and a talented writer. But, being a Greek myself and having lived through this story, as I was listening to the audiobook I was always aware of what should be obvious: That there are many sides to this story. I don't have the financial knowledge to evaluate all his arguments, so I won't get into that. Other people have.
In my opinion, Varoufakis' lack of substantial self-reflection and self-criticism (which I think is evident in this book) is a pity. He would have been more useful if he had more. I'm not saying this audiobook isn't worth listening to. It definitely is. I'm saying that it would be extremely naive to listen to this without keeping in mind that this is only one side of a very complicated story.
The narration is excellent.

Fascinating insights of the inner world of politics

May not add much concretely to one's life...but if one cares to know how the inner world of politics and democracy (or lack of) works...this is a must read. Varoufakis is definitey rare a breath of fresh air. Thanks for writing it

I was prompted to read this book after listening to an interview by Daniel Denvir on Jacobin's "The Dig" podcast with Varoufakis and Brazilian presidential candidate Fernando Haddad at the New School in New York City. I've already read "And the Weak Suffer What They Must?" but have yet to read his latest title.

This is play-by-play of Varoufakis' six months as Minister of Finance in Greece in 2015, surrounding their third bailout.

Varoufakis' goal as finance minister was to restructure Greece's debt so that it was more sustainable. For reasons which this book does not adequately elucidate, this was not an objective of the troika. Given this scenario, Varoufakis planned on Grexit, but his prime minister, Alexis Tsipras, chickened out on the plan and repeated the failures of the previous administration.

The narrative is excruciating. There are moments of hope repeatedly through the text, chronically dashed. If you're interested in learning about international finance, it is a worthwhile text.

The surprising hero of the book in Bernie Sanders, who repeatedly had Greece's back. Apparently Sanders and Varoufakis recently launched an initiative called the Progressive International as a tonic to the spread of rightwing nationalism.

I'm left wondering what the Venn diagram of Varoufakis, Mark Blyth, Mary Mellor, and Andrew Ross might look like.

In conclusion, it seems we're much closer to World War III than I would have wished. Trump's election is entirely explicable given Greece's story.

I was expecting to read about the failures of austerity, the naked hypocrisy of European technocrats, and the doomed left populist movement. What I was not expecting was a edge of the seat journalistic thriller. The author manages to build suspense while using extreme detail to fully flesh out the high stakes context in every scene. One memorable passage involves a heated, multi day negotiation over the addition or subtraction of a single word in a document without ever losing the narrative thread.

The narrator was excellent, with strong pacing, impeccable pronunciation, and believable but not over the top accents.

A Breathtakingly Riveting Book, Even Though Readers Know The Ending Before They Read It.

This Is Without Doubt, The Best Political Memoirs I Have Ever Read.

Yanis Varoufakis takes us through one of the most shameful episodes in European history. Even though I knew the ending before I read it, the book is thrilling, enlightening and jarring. Although Mr Varoufakis never says this, it is impossible to escape the conclusion that what Germany has done to Greece since 2009, is an economic version of what it did to them in the 1940s. (Indeed, it is difficult to think of any ambition laid out in Mein Kampf that has not been achieved).One day, this will happen to Italy and ultimately to France.
Varoufakis reveals that the EU and its Euro are merely tools for German domination.
I am no communist, far from it in fact, but just as Marx’s analysis of capitalism was uncomfortably accurate, this book reveals the fascistic and undemocratic nature of the EU, along with the bureaucrats who control it.
This is a Greek tragedy, both literally and figuratively. It is also a masterpiece.

The author takes you inside the halls of power & banking detailing how the German bankers worked to sideline Greek democracy and foreshadow what they have planned for France , the rest of Europe, and the world.

Yanis is a great story teller, the problem is that this story is non-fiction. The book gives a glimps of the so called neo-liberalisme that is currently sufficating Europe and the ideals we should hold true in the face of vested interest doing everything in its power to hold back progress and just policy. Must read!

Forget your money, they want your life.

ever wonder what really happens at the highest levels of government and finance.

here's a blow by blow of the workings of the 2015 Greek Debt Crisis by an insider.

great story, worth every minute invested in it.