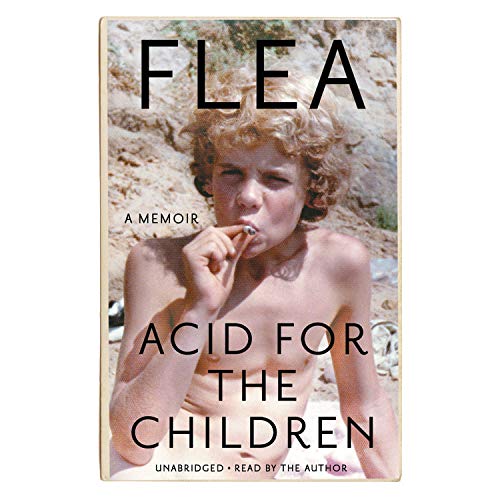 "[Acid For The Children is] written with the same lyrical, holy goof-ball energy its author brings to all his public activities, and its earnest, eccentric prose reflects Flea's evolution from Hollywood-scene knucklehead to reflective, spiritually clued-in adult." (The New York Times)

"A wild ride through the coming-of-age wilderness of the famed rock bassist...Relentlessly honest, untamed, and often revelatory." (Kirkus)

"[An] electric, surprisingly moving memoir...Flea is an enlightened narrator, and this passionate, smart memoir will resonate with readers whether they're fans of the band or not." (Publishers Weekly, starred review)

With "virtuosic vulnerability" (The Atlantic), the iconic bassist and Red Hot Chili peppers cofounder pens a love letter to a youth spent wild in Los Angeles in his raw and riveting coming-of-age memoir.

In Acid for the Children, Flea takes listeners on a deeply personal and revealing tour of his formative years, spanning from Australia to the New York City suburbs to, finally, Los Angeles. Through hilarious anecdotes, poetical meditations, and occasional flights of fantasy, Flea deftly chronicles the experiences that forged him as an artist, a musician, and a young man. His dreamy, jazz-inflected prose makes the Los Angeles of the 1970s and '80s come to gritty, glorious life, including the potential for fun, danger, mayhem, or inspiration that lurked around every corner. It is here that young Flea, looking to escape a turbulent home, found family in a community of musicians, artists, and junkies who also lived on the fringe. He spent most of his time partying and committing petty crimes. But it was in music where he found a higher meaning, a place to channel his frustration, loneliness, and love. This left him open to the life-changing moment when he and his best friends, soul brothers, and partners-in-mischief came up with the idea to start their own band, which became the Red Hot Chili Peppers.

Acid for the Children is the debut of a stunning new literary voice, whose prose is as witty, entertaining, and wildly unpredictable as the author himself. It's a tenderly evocative coming-of-age story and a raucous love letter to the power of music and creativity from one of the most renowned musicians of our time.

Flea gets it right...

The story of Mike Balzary navigating his existence, from birth through adolescence and the influences that shaped him. He’s a wild and crazy guy, but with a very kind heart to rival those other traits. Stories of drug-fueled debauchery are there, but certainly not glamorized, simply left there for you to consider and to help understand the street life that bred perspective and enlightenment in an veteran artist. I’ve loved his spirit and his music for decades now; add authorship to that list of things that Flea has blessed us with... much love to him for the soul-baring honesty. It touched my heart.

I’m listening to this book while serving in Addis Ababa. It is read as written as if Flea is knitting a black sweater for us to don and feel the safe, comforting, no-longer-aloneness. Every chapter read left me saying, “ME TOO!” It strums every emotion and not for the shallow or superficial.
Thank you, Flea. I’ll take you to Harar and Lalibela and raise a cup of buna.

I'll listen to this more than once.

I am so happy that this is read by the author. Hearing it in Flea's voice makes it great. I love the little giggles and can see him smile as he reads. Hearing him fight back tears at times makes me feel his story. Thanks Flea.

Felt like a long night listening to life story from a guy with severe adhd on a bender. Constant confusion of what’s going on, what time frame on, random side stories. Many I think will like it. Not my cup of tea.

A story of love and friendship

Michael Peter Balzary - Flea before he became Flea - tells a story of love and growth as he roams the streets of Hollywood with his friends in search of friendship and connection.

I listened to an interview with him and Malcolm Gladwell and I knew I had to get the book as well. Flea's narration adds a layer of authenticity to this very personal story, a story of longing for freedom, a story of growth and of escape.

I'm struck with awe as I imagine living in his broken household, with an alcoholic step-father that would only acknowledge his son when it was convenient. Soon after moving to Hollywood, young Michael was left to his own devices, alone and in dire need of guidance and friendship. Roaming the streets, he built up his personality and his future, with resilience and optimism. I am moved by his description of the friendship and camaraderie he found on the streets of Hollywood. I am inspired by his ever-present hunger for jazz and I'm humbled by his desire to pursue music above all else.

There are many lessons in Flea's account of his own childhood and adolescence; all of them learned through a trial of fire. From making mistakes to making friends, from doing drugs to reading books, this is a story of a person that forged his own path through life. Freedom is everything. If you read between the lines, you can glimpse his burning desire to be loved and accepted. This need is a good teacher. Michael grew up to see the best in people. He recalls with loving fondness the few times when Walter, his musician step-father, would surprise him with gifts, or with wise words. Even though he was often angry, neglectful, and sad, listening to Walter's band tear through hard bop phrases made young Michael see that everyone has a calling; and helped the aspiring musician to find his own purpose in life.

Many more stories await to be discovered in the book. Some are funny, some are sad, some are downright scary, but they all come back to one thing: family is important. Through family, you can discover yourself like never before. Find your family at home; if you can't, go out and find it in the streets. Whenever you feel like home, stay; no matter how hard it was to find, it will have been worth it.

It seemed like a good idea at the time

More than just wild tales of a drug fueled youth. This is beautiful and poetic, an earnest baring of a sensitive soul who found solace from an unstable home through running the streets of L.A. Thank you Flea, these words have touched me in the same way that your music has.

I really enjoyed learning the Flea side of the Red Hot Chili Pepper story. Flea references tons of amazing Jazz musicians that I will have to look up and which makes the story that much better. It is also so interesting to find out more about the actual people behind the music. The writing is a little choppy and jumps around but overall the story is fun. I’d recommend for fans.

Flea wrote a relatable piece of art from his soul. I am eternally grateful for his existence and words. Highly recommend this one!

having flea do the reading is like hanging with your bud on the couch just chatting. insightful and inspirational. thank you flea

Not a rock documentary

I was looking for a rock doc, and this wasn't it.  First half of the book is all about his life up until middle school. There was nothing terribly interesting about this. The second half of the book jumps all around, and it is hard to know where you're at on the timeline at any given point. . Would not recommend this book for people looking for the history or insight on the RHCP.