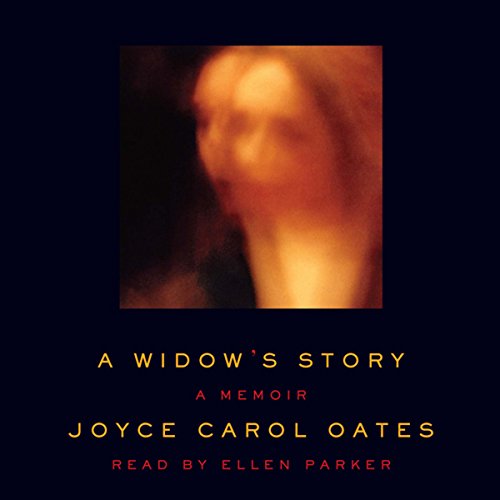 In a work unlike anything she's written before, National Book Award-winner Joyce Carol Oates unveils a poignant, intimate memoir about the unexpected death of her husband of 46 years and its wrenching, surprising aftermath.

"My husband died, my life collapsed." On a February morning in 2008, Joyce Carol Oates drove her ailing husband, Raymond Smith, to the emergency room of the Princeton Medical Center, where he was diagnosed with pneumonia. Both Joyce and Ray expected him to be released in a day or two. But in less than a week, even as Joyce was preparing for his discharge, Ray died from a virulent hospital-acquired infection, and Joyce was suddenly faced - totally unprepared - with the stunning reality of widowhood.

A Widow's Story illuminates one woman's struggle to comprehend a life without the partnership that had sustained and defined her for nearly half a century. As never before, Joyce Carol Oates shares the derangement of denial, the anguish of loss, the disorientation of the survivor amid a nightmare of "death-duties", and the solace of friendship. She writes unflinchingly of the experience of grief - the almost unbearable suspense of the hospital vigil, the treacherous "pools" of memory that surround us, the vocabulary of illness, the absurdities of commercialized forms of mourning. Here is a frank acknowledgment of the widow's desperation, only gradually yielding to the recognition that "this is my life now."

Enlivened by the piercing vision, acute perception, and mordant humor that are the hallmarks of the work of Joyce Carol Oates, this moving tale of life and death, love and grief, offers a candid, never-before-glimpsed view of the acclaimed author and fiercely private woman.

Talk about not wanting to turn the car audio player off...this is a minute-by-minute account, not only of a bereavement and of a death, but of a life as lived in each present moment. I'll never know why it is that some writers, and well-known, respected ones at that, can snooze me off with their painstaking detail (oh just get on with it will you?), and someone like Oates can mesmerize me, stun me with literary pleasure with her delicately nuanced accounts of the huge range of emotions encountered by one person, as they happen, moment by moment.

I am equally amazed at this "warts and all" presentation of Oates' self-doubts and insecurities, her lack of self-belief, and the meaninglessness to her of all her considerable accomplishments compared to the loss of her husband and soul-mate. That she can get this all down without appearing even mildly self-absorbed is another feat that impresses me.

Sometimes I get into weird moods and can't move on to a new book. That happened to me recently, and I had an instinct that the raw emotions of Joyce Carol Oates' memoir of her experience of losing her husband would stun me out of my own self absorption. I was right. The book is very painful to hear but the reader is excellent and portrays well the voice of Joyce Carol Oates as I imagine her to be. The book is very good at communicating the abrupt end of a comfortable and happy life without any sticky sentimentalism or self pity. It is very moving and yet has not caused even weepy me any tears. I am very glad I chose to read it.

While I enjoyed the storytelling (Ellen Parker did a magnificent job narrating) I was a bit unsettled listening to this story. The similarity of Oates story to Didion's memoir about the loss of her husband of 40 years seems more than coincidental to me. Oates is so critical of everyone around her that I had trouble caring about her terrible loss. Ms. Oates 'name drops' so often it's almost painful.

Oates is an incredible story teller, her use of language is like poetry. Listen to this book for her classic storytelling style more than the content. The content left me cold.

Heartrending at first, but drags after awhile

I hate to write anything negative about this book, because the subject matter is so personal and so convincingly describes a truly terrible event. I was deeply affected by the author's experiences immediately after the death of her husband, and for the first month or so thereafter, but the book begins to amble after that. With nearly half the book remaining, I had to force myself to finish it. The timeline began to be indistinct and the latter struggles just seemed to blend together. In short, the book could have been perhaps 3/4 the current length. Perhaps a good choice for an abridged reading. The narration, however, was very well done.

It is a beautiful book. - dark, honest and powerfully raw. The narrator's performance is extraordinary.

Did the second half have an editor?

I give Part One five stars - it was as emotional, as riveting as some of Oates' best fiction. And my heart ached for her because of what she was experiencing.

Yet Part Two deserves only three stars. Besides being full of redundancies, Oates' stream-of-consciousness writing - along with her attempts to share every positive aspect of her husband's life, along with her every suicidal fantasy - gave the last half a whining quality. Though I was glad to see she'd found a light-at-the-end-of-the-tunnel at story's end, I was also relieved to have reached the end of book.

I understand this was about a very sad, life changing experience, but with nearly half the book completed, I still found it depressing and dragging. I was so down after listening each morning on my way to work that I finally had to stop mid book, and move to another more upbeat topic. I hope in the end, she finds ways to be happy again but I won't finish the book to find out.

I love her books & really enjoyed getting inside her head. I learned a lots things I didn't know about her.

Very in depth experience of grief

Where does A Widow's Story rank among all the audiobooks you’ve listened to so far?

It made me very sad but hopeful.

Where does A Widow's Story rank among all the audiobooks you’ve listened to so far?

Possibly the best for narration -- at least in the top 3. Overall, the book itself, however, was a great disappointment. I don't think I'd have finished it had the narration not been so so good.