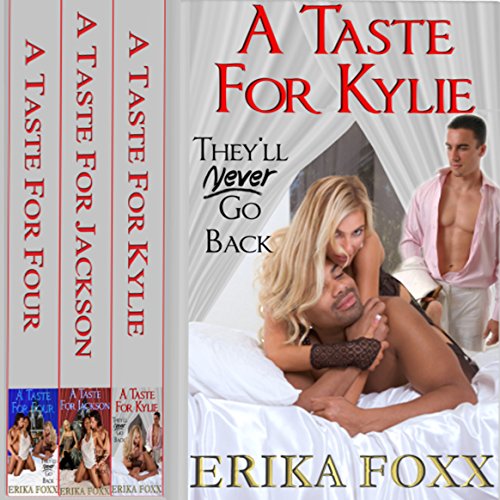 Book 1 - A Taste for Kylie - Kylie McCann thinks she's got the perfect marriage. But her husband Jackson is hiding a secret fantasy from her, one that he's had since before he first met Kylie in college, and it has become his obsession.

Book 2 - A Taste for Jackson - Jackson McCann finally shared his deepest fantasy with his wife Kylie, and she experienced a sensual night with a hot Jamaican man as Jackson watched. Now it was Kylie's turn to plan a new-found fantasy of her own for Jackson.

Book 3 - A Taste for Four - Jackson and Kylie McCann have discovered a new-found interest in watching each other's sensual play with their new friends, and Tristan and Summer like it as much as the McCanns. In fact, they want to take their friendship to a new level.

Intended for adults 18+ only. Contains graphic content of an adult nature.

A Taste for Kylie, Jackson and Four - Three Book Bundleに寄せられたリスナーの声

The narrator ruined the hotness that this book could've been

Would you ever listen to anything by Erika Foxx again?

yes as long as the narrator isdifferent

yes, find you another narrator the story line is great but the narrator sounds like her nose is stopped up and she MONOTONE..