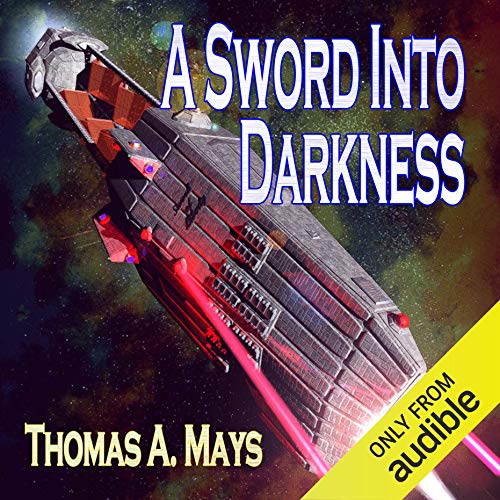 "Solid adventure, intrigue, and speculative space-tech, from a rising star in military science fiction." (David Brin, Hugo and Nebula Award-winning author of Existence)
"There are brilliant first contact stories, great space combat stories, and amazing stories of technological discovery. Rarely do you find all three in the same novel. Remember the name Thomas A. Mays. You're going to be seeing it on the best-seller list." (Jeff Edwards, award-winning author of Sea of Shadows and The Seventh Angel)
"Sharply written, suspenseful, and tightly plotted, A Sword Into Darkness reads like the best Tom Clancy novels, with a science fiction heart provided by Arthur C. Clark. Can't wait to read more from Thomas Mays!" (Graham Brown, #1 New York Times best-selling author of Zero Hour)

Humanity is no longer alone in the universe. An unknowable threat approaches Earth - and we are completely unprepared to face what's coming.

Aerospace tycoon Gordon Elliot Lee cannot stand idly by while a mysterious alien presence from Delta Pavonis bears down upon mankind's only home. Shut out from NASA and military support, Gordon is forced to go it alone, to sow the seeds for an entirely new sort of planetary defense: a space-based naval force.

Joined by Nathan Kelley - a bloodied naval warrior, scarred by his own actions in the waters off North Korea - and Kris Munoz - an avant garde scientific genius with more ideas than sense - these three will scour the very edges of fringe science and engineering to attempt development of Earth's first space navy in time to oppose the Deltan invasion.

Beset by ridicule, government obstruction, industrial espionage, and their own personal demons, it will take a miracle just to get off the ground. But the challenges on Earth are nothing compared to what awaits them in space. Against an unknown alien enemy with vastly superior technology, a handful of human scientists and warriors must become the sword that holds the darkness at bay.

Missiles will flash, railguns will rumble, lasers will burn, and defenders will die. If they fail, our end is at hand.

What did you love best about A Sword Into Darkness?

The concept of humanity having two decades to prepare for first contact, the vivid description of the technology, and the high-stakes plot were awesome.

My favorite character was the brilliant girl who blew up her developing the futuristic propulsion system. Who doesn't like a girl like that?

The launch of the Sword was a pivotal moment that moved me.

I gave this four stars in its Kindle format, really 4.5. I gave 5 stars to the audio version because it felt more real and alive hearing it. The reasons I withheld the 5th star in the written version were washed away by the audio.

I don't know if I can recommend this book or not. The story wasn't bad I have listened to a lot of books in this vein, and it did a decent job with the "save the Earth by making a big leap in technology premise". I feel I would have liked it more if the narrator was better.

Would you be willing to try another one of Liam Owen’s performances?

Liam Owen's voice wasn't bad, the big problem with his performance was he often mispronounced words. Lots of them. It was almost as if he had never spoken them aloud before. This happens at least once a chapter and it's very distracting. It takes the listener out of the moment while you try to figure out what he was trying to say.

Great story about a wealthy visionary who sees an upcoming alien threat years before the government. He assembles a great team to develop technology to confront an alien warship. Solid believable tech. Love how the story evolves over the years.

You can tell how the author's personal military life gave this a great realistic feel.

Exciting story. Hated getting out of the following commute to and from work.

Indulge in some war sci-fi

It's not a complex story or full of mind bending ideas, but is instead a classic story about human pererverance, ingenuity and blowing shit up. Take a break from the brainy stuff and indulge in some unadulterated space war.

A Sword Into Darkness is a pretty well-told, science-filled, military science fiction story. It begins with the detection of a potential "first contact" and tells the story of how we might rise to meet the challenge of an unannounced ship from another planet. The characters weren't really deep, but they weren't two-dimensional either. And while the science threatened to overtake the story a bit, at times, I found it enjoyable.

Would you be willing to try another one of Liam Owen’s performances?

I was disappointed in the reader who badly mispronounced words like piquant, heady, and gantry (as pee-kwant, heedy, and jantry). Sorry Liam, but you can get a pronunciation on dictionary.com. Do your homework. Also, while I don't require a lot of voice differentiation out of my narrators, his two-character dialogues often left me wondering who was speaking. Based on this performance I would be leary of listening to another book with Mr. Owen as the reader.

Really enjoyed the story here. Found it to have great mix of hard science making it all feel very real, solid characters and exciting story line. The build up here was excellent, nice twists and adventure here throughout. Narration here was also great making this an enjoyable listen!

OK, First off, upon reflection, I'm left with a slight feeling of "I kinda enjoyed this book", however, there seems to be one of those "Good Book Slumps" going on currently, so thinking I MAY have slightly enjoyed this book MAY be due to desperation from a recent lack of GOOD Sci-Fi Books... Have I lost you yet? If not, You're doing better than I am!

In the Sci-Fi Genre I have come to EXPECT that the Earth Encounters Aliens who are almost always technically superior to us, yet somehow we always seem to pull some stunning Victory out of the jaws of defeat by doing the best we can with what we have... This ain't that kinda book...

In this book, the Aliens are THOUSANDS OF YEARS ahead of us technologically, yet in nearly no time, a few people, hampered (as usual in books) by "Big Evil Governments and Big Evil Corporations", defy ALL odds and forces arrayed against them, and suddenly advance Physics, and our Technology, about 500+ years. I started to feel disconnected at that point by the GIGANTIC sudden LEAP in technology, and then everyone acting like they've understood it all for a 100 years or so.

But when we DO use this new Technology to build HIGHLY ADVANCED Star-Battle-Ships (In less time than you could build a canoe), we race out to confront the coming threat! What could the MASSIVE Alien Threat want from us that they couldn't obtain MUCH easier from the MANY other Planets and Asteroids they've zipped by? What do WE have that they can't get anywhere else??? When THAT question was answered, I literally laughed out loud and just began TRYING to suspend ALL belief in reality and just enjoy SOME PARTS of the rest of the story...

...but THEN things go downhill from there... To *ME* (And you may feel differently about it), It just felt like the Author couldn't think of a way to make advances and "threats" at least "SEEM Possible", so he kinda resorted to the old "We can do these impossible, unbelievable, things because... well... BECAUSE I SAID WE COULD!" The action scenes seem to be tossed in at random and forced into place, like someone said "There should be some Action here".. and the daring hero buckles under immediately after the appropriate amount of "Action" is finished.

I dunno... just seemed really "Jumpy", "Forced", and the plot seems to often depend on "And Then A Miracle Happens"...