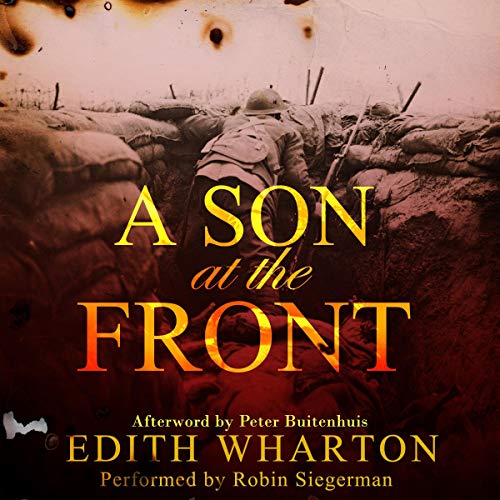 "What an incalculable sum of gifts and virtues went to make up the monster's daily meal." So observes American expatriate painter John Campton, whose only son is conscripted to military service in France at the beginning of WWI. In Edith Wharton's saga, A Son at the Front, we share the character's anguish as thousands of young men are sacrificed to the insatiable appetite of the war. The lessons are as relevant today as they were almost 100 years ago.

This recording includes, as afterword, an essay by war scholar Peter Buitenhuis, Edith Wharton and the First World War. This provides background and context to the narrative, and highlights Wharton's prodigious war charity work and remarkable war correspondence.

A Son at the Frontに寄せられたリスナーの声

The back cover copy/ book description pretty much spells out the book start to finish. John Campton’s only son, George, by an accident of birth is a French citizen. So, when WWI opens, he’s conscripted into the army. John, his ex, and his ex’s husband try their hardest to get George a cushy staff posting instead of going to the front, but George has his own plans, duties, and ideals to adhere to.

- The summary at the end was quite helpful.

- Length 3/5: Probably would have been more powerful as a 6-hour book instead of almost 12.

- Plot 3/5: A lot happens, but the perspective hampers the experience. It’s limited to John’s point of view, which is fine, but since he’s not really involved in any action per se, the book drags a lot. There are huge events talked about instead of experienced. It rehashes the horrors of war and the nervousness the parents feel by talking about the situation instead of showing the mud and blood of the trenches. WWI kicked off a long, bloody century. Now, a little over a hundred years have past and the problems of the day dominate thoughts, making the sufferings recounted seem mute, almost trivial.

- Characters 3.5/5: As Mr. Buitenhuis nicely summed up, the other characters are completely self-absorbed. That makes them realistic but not very likable. Even John’s not exactly a character who stands out in many ways. That’s kind of the point. He’s an artist and a father put in difficult circumstances, but always on the edge of the action because he’s legit powerless to change the war that threatens his most precious possession, his son. (That can be taken as endearing or creepy.)

- Performance 4.5/5: Solid. The characters are distinguished well. The French phrases and accents are also handled nicely. I would certainly listen to more of her efforts.

In many ways, it’s a beautiful story, but it’s too literature-y for me to be in love with. Maybe I’m just a soda fan being served wine.
*I received a free copy. I have freely chosen to review. All thoughts are my own.

While the story dragged at times the narrator brought the story to life with dramatic flare. The story line breaks your heart, all the more so with added gravitas delivered through the narrator’s performance. Highly recommended!