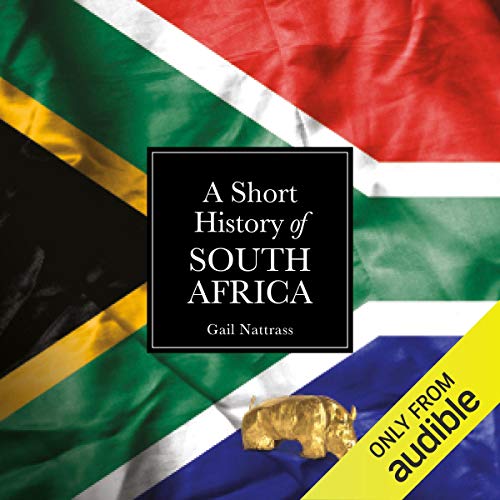 South Africa is popularly perceived as the most influential nation in Africa - a gateway to an entire continent for finance, trade and politics, and a crucial mediator in its neighbours’ affairs.

On the other hand, post-Apartheid dreams of progress and reform have, in part, collapsed into a morass of corruption, unemployment and criminal violence. A Short History of South Africa is a brief, general account of the history of this most complicated and fascinating country - from the first evidence of hominid existence to the wars of the 18th, 19th and 20th centuries that led to the establishment of modern South Africa, the horrors of Apartheid and the optimism following its collapse, as well as the prospects and challenges for the future.

This highly listenable account is the culmination of a lifetime of researching and teaching the broad spectrum of South African history.

Nattrass’ passion for her subject shines through, whether she is elucidating the listener on early humans in the cradle of humankind or describing the tumultuous 20th-century processes that shaped the democracy that is South Africa today.

A Short History of South Africaに寄せられたリスナーの声

It was very well read - a good narrator choice. The story was interesting but quite compressed. Not the most inspiring book though.

Unfortunately while being at times extremely informative it’s total lack of detail on certain key parts of South Africa history, from a History Professor no less, is inexcusable. Too much detail is given to certain subjects and sadly there is a certain amount of bias, both towards those who do not deserve it, and against those who are sold short by the lack of background information given and blatant failure to provide key information to the listener thereby given a distorted version of actual events. A listener would get from this book for example, that Winnie Mandela was a fine upstanding member of the community without a blemish on her character and that the only reason the 1961 referendum was held was because the Afrikaner population no longer wanted a monarchy. Both are wildly incorrect. There is a definite anti English bias from the author which is illustrated in the second example I have previously given. Eden’s winds of change speech warrants two sentences, zero mention is given of Britain’s opposition to racist Afrikaner nationalist policy which led to the 1961 referendum and instead the referendum is dressed up in anti monarchy clothing and sold fraudulently to the listener. While this book is informative, it is written in very basic language, fails to provide accurate or enough background information and succumbs to the authors perceived desire to placate the African and Afrikaner reader at the expense of Britain even when the facts are wrong, distorted or just completely missing. Refunded, with regret.

As Nattrass acknowledges in her introduction, there are few accessible histories of South Africa, but this book does not fill that gap. It's closer to a guidebook than a history, in that is lists events & tells anecdotes but gives very little context to them; Nattrass relates events but entirely avoids trying to explain why these occured or what it was like to live in South Africa at any point in its history. Disappointingly, you'll probably get a better understanding of the history of southern Africa by reading the Wikipedia entry than listening to this book.

In addition, the book suffers greatly by obviously being written from a white perspective & - even - a fully racialised perspective. At no point does she question the validity of racial categorisation, the early chapters especially make no distinction between race & culture, & (most horribly) she explicitely states that the thinking behind apartheid was praiseworthy. She goes on to regret the 'excesses' of that racist policy but in a context of never questioning it as such. More subtly, stories about non-white personages are filled with assessments of their character ('backwardness', 'sins') while stories of whites are matter of fact. People like Rhodes are never referred to as genocides but lauded as protectors of industry & the integrity of their conquered lands. It's a difficult book at times.

The narration is free from defects but doesn't shine. Woodward maintains a permanently chipper tone throughout, even when describing atrocities.

You could give this one a miss...