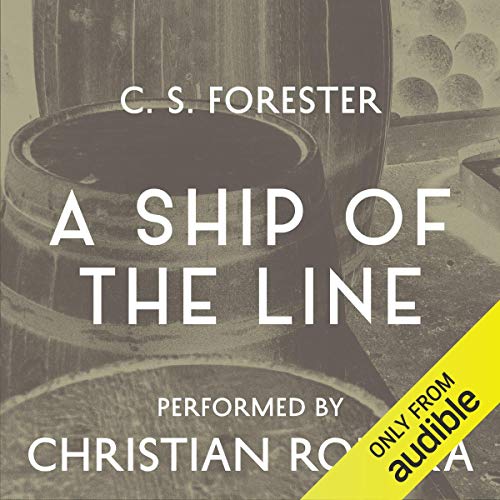 The sixth instalment in the eleven-part Horatio Hornblower series, A Ship of the Line sees the return of 39-year-old Captain Hornblower as he embarks upon a new adventure on the Catalonian coast.

Having successfully defeated the Natividad Ship in battle, Horatio is awarded command of HMS Sutherland. Estimated to be the 'the ugliest and least desirable two-decker in the Navy List,' Hornblower's first ship of the line is far from becoming the vessel of his dreams, and being 250 men short of a full crew, the captain is forced to enlist and train a rabble of 'poachers, bigamists and sheep stealers.'

Seventeen years into the Napoleonic wars, Hornblower cannot afford to pause or make mistakes and the pressure soon mounts as the French approach the Catalonian shores.

Winner of the 1938 James Tait Black Memorial Prize for Fiction, A Ship of the Line delivers an action-packed seafaring adventure as one of the nation's favourite captains takes the lead once again.

Hugely celebrated for his Napoleonic naval warfare series, and later for the publication of The African Queen, C. S. Forester came to writing much later than expected. Having originally studied medicine at Guy's Hospital, Forester first developed a love of story-telling after being inspired by his travels with the Royal Navy.

Sadly stricken with arteriosclerosis whilst voyaging to the Bering Sea, C.S. Forester was crippled in his later life, but his imagination and his skill with a pen survived for years to come.

Christian Rodska is an English television and voice actor best known for his role in the 1970s series Follyfoot.

From The Monuments Men and The Eagle of the Ninth to The Likely Lads, Z Cars, The Tomorrow People, Coronation Street, Bergerac and Casualty, his extensive and diverse acting career has led him to become a highly solicited radio and audiobook narrator.

He has now voiced over 150 unabridged audiobooks including Winston Churchill's biographies, Evelyn Waugh's Men at Arms and Sebastian Faulks' A Possible Life. He has been praised for his ability to vary in vocal pace and style and as such, Christian boasts 12 Earphone Awards from Audiofile Magazine.

A Ship of the Lineに寄せられたリスナーの声

Having read all of C.S. Forester's Hornblower series as a (male) teenager and remembering the excitement it provoked in me, I listened to Ship of the Line. I was not disappointed. The detail of life and combat aboard an 18th century warship and the complexities of seamanship are vivid and satisfyingly complex. I had forgotten that Hornblower used to get seasick upon setting sail after several weeks ashore. The political infighting and maneuvering for prestige among officers of the Royal Navy is especially interesting. This audiobook is nicely read by Christian Rodska.

Christian Rodska did an excellent job narrating the book. I had finished reading all of Patrick Brian's book on Aubrey and was looking for more 1800 sea stories. I had never read the Hornblower books but do remember the movie. This book was written in 1937 and I believe it was the first book in the Hornblower series. Forester story is so vivid I feel the sway of the deck and hear the slap of the sails. Forester created some exciting sea battle scenes along with the suspense of a storm at sea. The book closed with a cliff hanger so can hardly wait to start the next book in the series.

Looking forward to another Hornblower book

At first I wasn't sure I would like this book but after the 3rd chapter I was drawn in. The narrator did an excellent job with the different characters creating an audio movie really. I recommend this book if you enjoy historical fiction with naval adventure and tiny bit of romance thrown in.

What did you love best about A Ship of the Line?

A ship of the line is a wonderful book. I have read all but one of the Hornblower series of books. I will be reading the final one when I get my next credit. Any of the Hornblower series is is a great read. And Christian Rodska is a fantastic reader. He is able to invest himself to each character in the novel. His ability to read for a woman, old man or young child is fascinating. I never stop to think that this is the same person He is always able to keep in character through many lines of dialog.
What I like about Hornblower is that he does have some faults. He is human character with many of the same insecurities as all of us. However his mental abilities put him above most of the other characters in the book. I find it enjoyable to read a book where loyalty to duty and country are rewarded. You would not be disappointed if you purchased this book, nor any of the other Hornblower series.

As a journeyman captain of a ship of the line, Hornblower has plenty of opportunities to strut his stuff--Lots of action. Detached to operate in the Mediterranean during the Napoleonic wars, he submits command to Lord What's his name, the husband of his love, the Lady Barbara. Many clashing sea battles that are well described in detail. "old Boney" is the villain. The ending is a cliff-hanger, unusual for a Forester book.

what a great story and great narration. I highly recommend the series and specifically this follow-up to The Happy Return.

Wonderful story and per usual Rodska does an outstanding job as narrator. Great experience overall!

C.S. Forester is one of my favorite authors. I'm a big fan of his Horatio Hornblower series. This one does not disappoint. Christian Rodska does a great job on this. All around one of the best audible performances I've heard.

The ending drove me crazy- WOW!!

I absolutely love the books as I have enjoyed all of the others. wonderful wonderful!

Warning! If You start this book be prepared to buy "Flying Colours" as well, since the book ends with a cliffhanger that is resolved in the next book.

Christian Rodska does an amazing job reading the Hornblower novels. This book is no exception. He really brings C S Forester's wonderful prose to life, and it is thoroughly enjoyable.

I am loving the development of Hornblower’s character - his lack of self-confidence etc. But this story didn’t grip me as others in the series have.

Best one yet, totally gripping, amusing and heroically tragic all at the same time. Listen and enjoy!!

True Forrester. Well read with understanding and emotion. It leaves you wanting to know what happens next.

My hope that the others are as good, has in fact, proved certain. I have been looking F'ard to the series as I have amassed this treasure trove, with the movie popping it's head above the poopdeck every leeward. I have to say that I am more surprised than I thought I was going to be. I assumed it was going to be good, and I am very glad to be proved wrong Sir.

It is very GOOD Indeed Sir.

Fast paced, full of story and adventure. The best of the Hornblower books I have yet listened to. I've been listening to the series in chronological order and have enjoyed getting to know the characters so wouldn't listen to this one first. it's great though.

Great books, recommended reading chronologically. This is one of the most dramatic of the series

I’m really enjoying the Hornblower series. This book was superb. Excellent narration, a great story line and a great way to spend my commute.