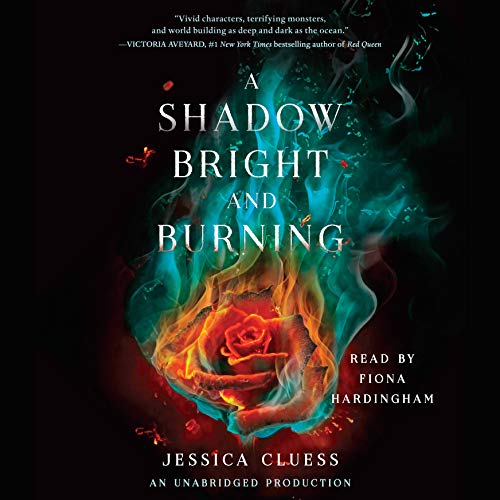 "Henrietta is pragmatic and bitingly funny, and she more than holds her own in a man's world. Cluess gamely turns the chosen-one trope upside down in this smashing dark fantasy." (Publishers Weekly)

I am Henrietta Howel.

The first female sorcerer in hundreds of years.

Henrietta Howel can burst into flames.

Forced to reveal her power to save a friend, she's shocked when instead of being executed, she's invited to train as one of Her Majesty's royal sorcerers.

Thrust into the glamour of Victorian London, Henrietta is declared the chosen one, the girl who will defeat the Ancients, bloodthirsty demons terrorizing humanity. She also meets her fellow sorcerer trainees, handsome young men eager to test her power and her heart. One will challenge her. One will fight for her. One will betray her.

But Henrietta Howel is not the chosen one.

As she plays a dangerous game of deception, she discovers that the sorcerers have their own secrets to protect. With battle looming, what does it mean to not be the one? And how much will she risk to save the city - and the one she loves?

"The magic! The intrigue! The guys! We were sucked into this monster-ridden, alternative England from page one. Henrietta is literally a 'girl on fire' and this team of sorcerers training for battle had a pinch of Potter blended with a drop of [Cassandra Clare's] Infernal Devices." (Justine Magazine)

"Unputdownable. I loved the monsters, the magic, and the teen warriors who are their world's best hope! Jessica Cluess is an awesome storyteller!" (Tamora Pierce, number one New York Times best-selling author)

"Pure enchantment. I love how Cluess turned the 'chosen one' archetype on its head. With the emotional intensity of my favorite fantasy books, this is the kind of story that makes you forget yourself." (Roshani Chokshi, New York Times best-selling author of The Star-Touched Queen)

"A glorious, fast-paced romp of an adventure. Jessica Cluess has built her story out of my favorite ingredients: sorcery, demons, romance, and danger." (Kelly Link, author of Pretty Monsters)

A Shadow Bright and Burningに寄せられたリスナーの声

perfect for this time of year

This book is a perfect mix of magic, mystery, friendship (just thinking about what Rook and Henrietta have gives me all the warm feels) and creepiness (I say this as someone who absolutely can't handle horror so some people probably won't find this all that creepy but there was one sentence that really creeped me out, just thinking about the words and the way the narrator said them gives me chills). If people are looking for romance they really aren't gonna find any here, I mean there is kind of romance but also not, it can easily be dismissed and I liked it like that. I liked the fact that in my opinion it was all about friendship, the friendship between Rook and Henrietta but also the friendship between Henrietta and the other sorcerers. I did have some problems with Henrietta, but nobody is perfect. Overall I really liked it and recommend it to everyone!

I liked the overall concept of this story although sometimes the characters annoyed me. I think I like one of them and then they go and do something stupid and have to redeem themselves. It was really up and down throughout the entire book but I think it has a lot of potential to become a great series.

I love this story

I am never disappointed by this narrator she is wonderful. Thank you audible for this lovely addition

After reading several negative reviews about how this book was boring, hard to get through, or predictable, I almost did not use a credit on it. I am really glad I did.

First off, the performance of the narrator was incredible. Her voices were quite good, and her accents were nice to listen to. She was great witn dramatic pauses and voices, and added plenty of emotion to different characters. I am going to find other books she has narrated, because she seems really talented.

The story was really interesting. I found that I didn't know who to trust or distrust, and I was surprised by the final twists. I didn't necessarily find this book to be predictable. I didn't guess some of the twists and turns, but, then again, I'm not a picky reader. I thoroughly enjoyed the character developments throughout the book, especially that of Lord Blackwood. I enjoyed the historical aspects of the book, how it is almost like an alternate reality where magic exists. The setting was enjoyable, and so was the dialogue. I found myself amused at multiple points throughout the book.

Overall, a really good listen. Definitely worth the credit, and I will be buying the next two books.

The story started off great. But it ended up dragging. I actually skipped through the last 1.5. The story has promise, and might come together next book. But I hate when a mystery drags on too long. The relationships didn't develop enough and romance some what flat. I'm shocked I'm not really giving it a good review. Because I love Fiona Hardingham. I could try to rethink k this book. It just seemed like they had a great idea but then met writers block and we had to sit through it too.

So glad I found this book!

I looked for a new book for months and just stumbled across this one and hands down is now a top favorite. I’ve always love the whole magic scene like Harry Potter and such and this one created a strong female character whose not so washed up in a love story that it ruins the action and heroism! This felt like a compilation of all my favorite bits and pieces from large iconic movies such as Harry Potter magic, hunger games action, and a little pride and prejudice character development. Can not wait to listen the second book, will be dying for the third!

The Victorian England backdrop and the interesting dynamics of the sorcerer/magician/witch hierarchy made this book feel very different and new compared to other YA books out there. I loved it and am immediately going to read the sequel.

enjoyable listen for those who love magic

A very interesting story - a nice new creative take on magic. The narrator was good - did a great job with the characters. If you like Victorian England with magic, this is the story for you. My only negative is the series isn't complete so you have to wait for the books to be released.

A Mysterious and Magical Novel

Where does A Shadow Bright and Burning rank among all the audiobooks you’ve listened to so far?

A Shadow Bright and Burning ranks in the definite Top, 5-star ratings.

My favorite character was, after Henrietta Howel of course, Magnus. I thought he'd be the one to betray her, but he was so darned likable and funny.

What does Fiona Hardingham bring to the story that you wouldn’t experience if you just read the book?

Other than her lovely accent, she brought the characters to life. She didn't just read the story, she gave each character personality and realism. Not many readers do that.

I absolutely could have listened to this novel in one sitting. Sadly, I am a homeschool teacher and housewife, so I listen when I'm doing chores, or in between lessons.

Cluess wrote with a sort of webbing, where I saw nothing coming. What I thought was to happen didn't, but something greater occurred that blew me away. She wrote with a descriptive style that was truly Victorian and English and fabulous. I don't know anyone who could pick this book up and not find themselves captivated. A Shadow Bright and Burning is also book one of the Kingdom of Fire series. Book two, A Poison Dark and Drowning released September of this year. I'll be sure to read that one as well and share

this was such a good book I'm so glad I read it! I actually cried tears of joy at the end it was so good! she's a lot stronger then most lead girls I know what a fantastic book!