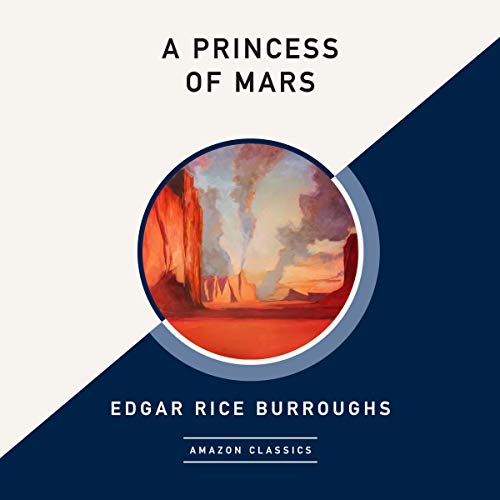 After prospecting for gold in Arizona, Confederate Civil War hero John Carter stumbles upon a mysterious cave - a portal, it turns out, to the ecologically endangered planet Mars. Once there, he finds his place with a tribe of green Martians, and his newfound powers in the reduced Martian gravity make him an important figure in their war against a rival tribe. At the heart of this conflict lies the beautiful Dejah Thoris, the kidnapped Princess of Helium. Rescuing her soon becomes paramount, for only she can help Carter save the dying planet he now calls home.

A Princess of Mars (AmazonClassics Edition)に寄せられたリスナーの声

A Classic brought to life

You may or may not have read this in your travels, but this classic story has been around for a long time. I have to say - listening to this narrated by James Patrick Cronin was much better than reading this book for me. He's a favorite narrator, but he really brings every story he does come to life, and this is no exception. Worth listening to!!

I love the narrator's voice, how it actually sounds like a southern gentleman. His different voices were noticeable but not perfect but that's fine. narrator had a fluidity to his reading that was really good! The story it's self I came here after watching the movie and the book had a lot more interesting content and information where if I was to watch the movie certain scenes would make more sense. The romance between Dajah and Carter seems to make more sense in the mook than it does the movie, but still a little confusing. Over all I really enjoyed this book and I wish this narrator would do the second book because I am not a fan of the other narrator's voices for Mr. John Carter.

Please add AmazonClassics for the other books!

I LOVED this audiobook. James Patrick Cronin was fantastic. I want to buy the other books, but it won’t be the same with a different narrator. Absolutely fantastic performance! I hope Amazon will hire this same team to do the other books!!

This was a very unique story about a civil war soldier who ends up traveling to mars via a porttal that he found when he was hiding in a cave to escape the Apaches that were chasing him because he rescue his friends body that they had tortured and killed. He ends up falling in love with the the Princess of Mars, which of course is completely off limits, she is betrothed to someone else. As far as the society is concerned she is already married. This is a very captivating story, A must-read! It is very readable as well, also a perfect length if you are looking for a quick read

of all the many versions of this audiobook ive sampled i liked this guys voice and reading style the most.

A Princess Of Mars

Wonderful story! A great read for all ages! Burroughs and his wonderful imagination shine through once again,a must read!!!

Hard to put down.

I wish I had read it before. ERB is a great writer. Hard to put down. Also, I listened to it on Audible. The narrators voice was very nice and he conveyed feeling and emotion well.