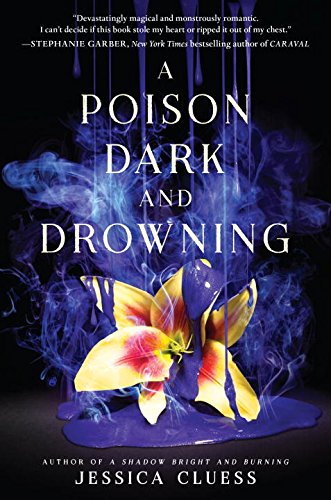 "Devastatingly magical and monstrously romantic. I can't decide if this book stole my heart or ripped it out of my chest." (Stephanie Garber, author of Caraval)
"Cluess gamely turns the chosen-one trope upside down in this smashing dark fantasy." ( Publishers Weekly)

The magicians want her to lead.

The sorcerers want her to lie.

The demons want her blood.

Henrietta wants to save the one she loves.

But will his dark magic be her undoing?

In this seductive and explosive second book in the Kingdom on Fire series, Jessica Cluess delivers her signature mix of magic, passion, and teen warriors fighting for survival. For fans of Victoria Aveyard, Sarah J. Maas, and Kiersten White.

Henrietta doesn't need a prophecy to know that she's in danger. She came to London to be named the chosen one, the first female sorcerer in centuries, the one who would defeat the Ancients. Instead, she discovered a city ruled by secrets. And the biggest secret of all: Henrietta is not the chosen one.

Still, she must play the role in order to keep herself and Rook, her best friend and childhood love, safe. But can she truly save him? The poison in Rook's system is transforming him into something monstrous as he begins to master dark powers of his own. So when Henrietta finds a clue to the Ancients' past that could turn the tide of the war, she persuades Blackwood, the mysterious Earl of Sorrow-Fell, to travel up the coast to seek out strange new weapons. And Magnus, the brave, reckless flirt who wants to win back her favor, is assigned to their mission. Together, they will face monsters, meet powerful new allies, and uncover the most devastating weapon of all: the truth.

A Poison Dark and Drowningに寄せられたリスナーの声

It’s hard to review this without spoilers but I will say what I always hope to see on sequel reviews - this was just as good if not better than the first book and i am so excited to read the third whenever it is released.

A very interesting story - a nice new creative take on magic. The narrator was good - did a great job with the characters. If you like Victorian England with magic, this is the story for you. My only negative is the series isn't complete so you have to wait for the books to be released.

I enjoy it. Maybe it was me but I was hoping for a little more romance. Overall not a bad book to keep you busy during work. Happy reading!

It's rather hard to believe that Henrietta the scholar doesn't seem to know what a crows nest is called, or a mast. What did those extra words monologued explaining to herself what she didn't know provide to the story? Nothing, it made the word count higher and irritated the reader. Also this is book started off well enough but had a most unromantic ending. A highly unsatisfying sequel to what couldv'e been a great trilogy. Also the big reveal has been done soo many times before by so many other writers in this genre that it was uninteresting and too predictable. I had high hopes for this series to be different but it's just more of the same.

It's refreshing to have a book with a strong lady lead that has little romance. Slay things, maybe kiss later, but it's not a requirement.

Jessica did it again! a great second in a series and I can't wait for the third. Fiona is the best of the best when it comes to narration. she did fantastic as always!

Feel every emotion there is

I sincerely enjoyed both these books. However after listening to both I feel cheated.... grr the story isn't over yet. I hope Henrietta survives. I look forward to what happens next... will there be another story?

This book kept me enthralled! It played with my heart like a ferocious kitten with a string. Then the kitten chewed up the string digest it and shat it out. Now I'm sitting here like like a lifeless turd. LOVED!