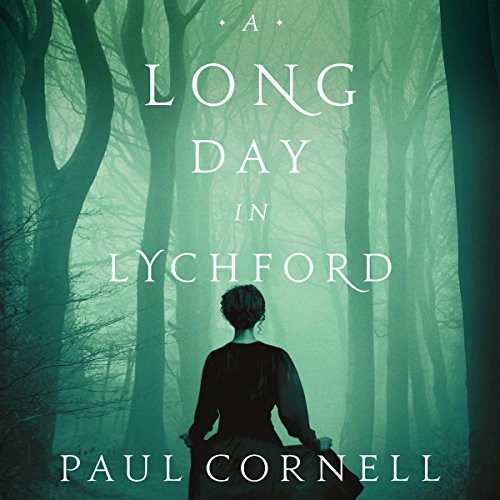 A Long Day in Lychford is the third audiobook in Paul Cornell's increasingly popular Witches of Lychford series.

It's a period of turmoil in Britain, with the country's politicians electing to remove the UK from the European Union, despite ever-increasing evidence that the public no longer supports it. And the small town of Lychford is suffering. But what can three rural witches do to guard against the unknown? And why are unwary hikers being led over the magical borders by their smartphones' mapping software? And is the immigration question really important enough to kill for?

A Long Day in Lychfordに寄せられたリスナーの声

I have binged the Lychford series over the course of the last month, and I have greatly enjoyed its humor, creativity, and overall, its brilliant characterizations of its three main characters. The third installment is no different; the conflict between the women and the supernatural forces at large continues to escalate, the characters continue to be fleshed out further by exploring concepts of disability and racism, and the author boldly explores how real world issues such as Brexit would affect life in their tiny town of Lychford.

Unfortunately, this story is blighted by some pretty awful narrating this time around. The previous two narrators were so good, I didn't even notice they weren't the same person until I wrote this review. Book 3s narrator lacked all the finesse and charm of the previous two, and brought to the table an obnoxious accent that was a mix between Irish and Cockney. This made what was previously a super engaging series very hard to listen to for extended periods. narratively speaking this is a great book, but I really hope Audible is more selective when choosing who reads the fourth book.

A skillful blend of magic with social commentary

For me, this was the best installment yet in the Lychford series. The examination of British nationalism in the wake of the Brexit vote was thoughtfully handled without preachiness. The story explored what it's like for people of color to feel like outsiders in their own nation, never sure if they are truly accepted. Cornell also offered a unique supernatural take on how a meeting of minds can lead to better understanding.

I wrote in my Lost Child of Lychford review that the magic became so inscrutable it was too often incomprehensible. Cornell did a better job here making the witches' magic chaotic and mysterious while still leaving me able to follow the story.

This author AND narrator are a great find!

I’d never read anything written by Paul Cornell before, nor heard the extremely talented Robin Miles before either, but both have proven to be great gems. Though I wish the books were longer, they are tightly written, wonderful novellas & Ms Miles performs each character beautifully.


what the hell were you thinking getting rid of either emma newman or maris cain??

i just couldn't keep listening and had to stop

nice short story let down by a poor performance

accents and voices made it a hard listen. worth fighting through it. Judith's dementia is handled well.

The narrator is all over place, the accents are inconsistent and awful makes the story difficult to listen to. Makes story confusing.

Oh what a shame

I'm not sure if it was a deliberate attempt at cleverness by the producer, having a book with anti-brexit sentiments narrated by somebody who sounds as if they are European (German?) who has English as a second language but it's AWFUL and unfortunately ruins the whole thing. I shall have to buy the physical book now as I just can't listen any more. I thought we might be in trouble early on when they pronounced the word "plough" as "pluff" but it just gets worse with accents wandering all over the British Isles in a single sentence for a single character. Nononononono. It's not an easy job, narrating a book on a way which doesn't get between the story and the reader's imagination, and unfortunately this is just a series of wincing clunks. Such a shame as the previous narrators were great. On this occasion I would advise fans to buy the print version of this book.

A different narrator for this book and is to be honest awful. Her accent is all over the place and it really made me struggle with the story because it just made it hard to listen too. Please go back to the usual narrator or get someone who can do a better job.

I found this one of the hardest book I have ever listened to and I own over 800 audible titles.

I am sorry but although the story was great, well I think it is as it was so hard to process I know I didn't take it all in.

The narrator spoke as if she was trying to make it into some kind of song - her voice goes up and down, up and down but not to any even beat. She gave accents to everyone that were all the exact same for the most part but then she suddenly forgets she is giving them accents and for a blessed few moments she speaks normally. If a vicar spoke as she made Liz speak the church would have no parishioners , she sounds more like a grumpy old man than a young woman. Sitting through sermons from a vicar with that voice would be unbearable.

If the narrator wants to continue like this please go on the stage, your voice with this accent would be perfect for this but not continuously reading a story.

I will be asking for my credit back as no way will I ever want to listen to this book again. I feel edgy and really unsettled after listening to this - I wanted to know the story so did force myself to listen to it all but oh boy it was not a pleasant experience and if this narrator ever reads another in the series then I will not be purchasing it no matter how much I enjoy this series.

I don't like writing a negative review and am sure if the narrator had spoken in her ordinary voice, such as she does for odd moments I would have found listening a lovely experience.

Maybe I am odd but I prefer a narrator just telling the story in a neutral voice and leaving me to put whatever accent I want onto it in my head along with everything else as I picture it all as the story unfolds.

Sorry Robin Mills but if you are going to always narrate this way I will be avoiding every book you narrate. Your normal voice when you spoke in it is lovely, please use it.

I couldn’t actually finish this book purely because the narration was so awful. It’s a shame because I loved the previous books. Truly dreadful.

I enjoyed the last two instalments in the series, but I’m afraid I had to give up on this one early, because I struggled with the abrupt change in the characters’ accents from the previous books, e.g. Sean suddenly seems to have become Irish. It was all a little bit Dick Van Dyke.

This has ruined the series for me. I can’t go on listening to this book as it’s performed by the worst narrator I’ve ever heard. It was obvious it was all going wrong when she pronounced plough as pluff - don’t editors check for that sort of thing?? But it gets worse anyway. More weird pronunciations, and a whole load of newly invented accents. Which apart from being horrid to listen to, also wrecks the characters you’ve built up in your mind over the first two (great) books.
I think they should have kept the same narrator all along. The first one was lovely with a gentle voice and appropriate accents. Second was ok. If you’re doing a series it’s best to keep the same narrator that drew the readers into the story in the first place.
I mean, pluff, seriously.

Why change the narrator?

I was so disappointed in this one from a performance point of view. The new/different narrator made it impossible to finish listening to it. I’ve bought the book instead, as the story is great and I do love this series.

I wholeheartedly recommend this author, unfortunately not this particular narrator for THIS book.

I almost couldn’t get through to the end because of the narration - it was painful!
But I had to - I really enjoyed the two previous Lychford stories and felt I couldn’t miss this one.
I’m really confused and disappointed at the choice of narrator for this third book.