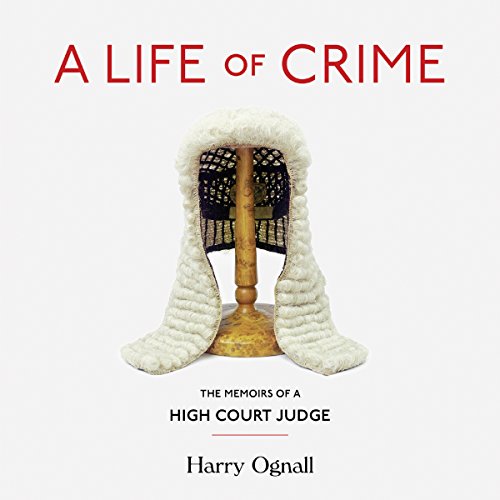 A Life of Crime: Memoirs of a High Court Judge

A witty and candid memoir of life at the Bar and on the Bench, from former High Court Judge Sir Harry Ognall.

The Hon. Sir Harry Ognall is a retired judge of the High Court, Queen's Bench Division. For many years, he enjoyed a formidable reputation as an advocate at the criminal Bar. As counsel, and later as judge, he was involved in numerous high-profile trials, both here and abroad.

Among many cases as a QC, he prosecuted Peter Sutcliffe, the so-called 'Yorkshire Ripper'. He successfully defended six officers of the Air Force of Zimbabwe at their trial in Harare, where they faced a charge of treasonable sabotage.

As a judge, he presided over the trial of Colin Stagg (the alleged 'Wimbledon Common murderer'), the trial arising from the Lyme Bay canoe tragedy, and the trial for the first time in the United Kingdom of a doctor's alleged involvement in euthanasia.

Thoughtful and provocative, Sir Harry has advice for the aspiring young advocate and invests this penetrating memoir with warmth, humour and understanding. His frank portrait of a lifetime in the criminal law offers unique perspectives on some of the most notorious cases of the 20th century and fascinating insights into a colourful professional life and the burdens and responsibilities that come with the privilege of high judicial office.

A Life of Crime: Memoirs of a High Court Judgeに寄せられたリスナーの声

not Bad for the money

certainly an insight to the law, a nice listen and extremely agreeable man too. At the price you can't go wrong. good listen.

I could relate to many of the cases and events due to my age which made it interesting. It also put some meat on the bones of the structure of the legal profession from the point of view of being a barrister through to being a judge. The author’s (in my opinion )slightly too left leaning views were interesting particularly on capital punishment.
Overall a decent listen but could have been a bit longer.

I enjoyed this entertaining and informative account of the author’s many interesting trials first as counsel and latterly as judge. Some trials are famous such as the Yorkshire Ripper and the two trials associated with e murder of Rachel Nickell.

The narrator is an excellent choice as he has the voice of an older man and mDe me feel the retired judge was retelling his own story.

The narrator of this Audiobook was a joy to listen to. The Book is full of interesting tales. Well worth a listen.

Had reasonable expectations for this but found it very disappointing, light on case details and self congratulatory all the way through. It also felt like a three hour book over stretched.

I've enjoyed each word in this book. Excellent stories and beautiful narrative. You will love it.

To be honest this book just reveals how big a ‘boys’ club our Judiciary really is. I was expecting something much better. In reality it’s just a privileged member of the elite................reminiscing about his career. VERY dull and a TOTAL waste of money.

Absolutely thrilling and insightful read. The best kind of books making you feel a full spectrum of emotions.

No real juice in the story , just series of short tales without any real insight maybe interesting for those in the profession

Very interesting and insightful to the British court system.

Enjoyed the narration as it was clear and concise without being patronising. Harry Ognall has prosecuted some interesting cases and presided over many more.

All in all a good listen.