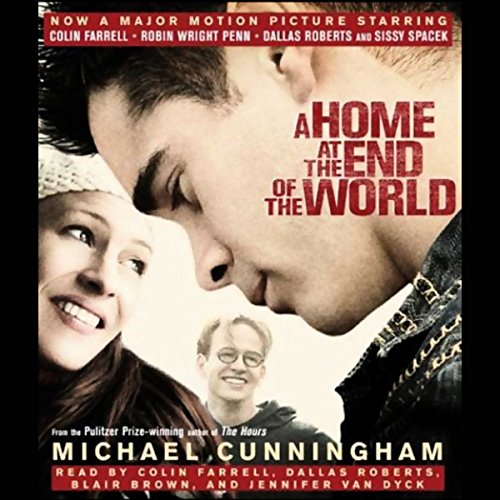 "No praise can be too high for Cunningham's writing." (Publishers Weekly)
"Lyrical....Memorable and accomplished." (The New York Times Book Review)
"Novels don't come more deeply felt than Cunningham's extraordinary four-character study....The writing [is] a constant pleasure, flowing and yet dense with incisive images and psychological nuance." (The Boston Globe)

Michael Cunningham's celebrated novel is the story of two boyhood friends: Jonathan, lonely, introspective, and unsure of himself; and Bobby, hip, dark, and inarticulate. In New York after college, Bobby moves in with Jonathan and his roommate, Clare, a veteran of the city's erotic wars. Bobby and Clare fall in love, scuttling the plans of Jonathan, who is gay, to father Clare's child. Then, when Clare and Bobby have a baby, the three move to a small house upstate to raise "their" child together and create a new kind of family. A Home at the End of the World masterfully depicts the charged, fragile relationships of urban life today.
©1990 Michael Cunningham (P)2004 Audio Renaissance, a division of Holtzbrinck Publishers, LLC

A Home at the End of the Worldに寄せられたリスナーの声

I hated for it to end

This book was over way too soon. I go through a lot of audio books, but few I could just listen to for many more hours. Well read and engrossing.

One of the best I've listened to

Amazing characters, thought provoking and extrememly well read. It left me wanting more, so I listened to it a second time.

This is a wonderful book. I have only listened to the audio version, unusual for me, as I am a voracious and proprietary reader who likes to imagine my own characters and voices as I read the words. But in this case I was glad I had not already done the casting because this story is narrated so well. All four characters come to life and make listening a joy, heartbreak and a truly special experience. I will probably still read the book and I hope I continue to hear their voices. Highly recommended.

Left me a little unsatisfied

I listened to most of this on our way to Orangeville to put my father's ashes into a cubby-thing (tm), and most of the ride back. The fact that the gay character has to decide what to do with his father's ashes was a bit of an ironic twist to the selection, but otherwise, this was what I'd call a character study novel, in that the plot itself doesn't really go anywhere.

Basically, you follow the lives of four people, Jonathan (the gay fellow), his mother Alison (a New Orleans girl who married a fairly plain fellow in Jon's father), Jonathan's childhood friend and first love, Bobby (who was voice/narrated by Colin Farrel and mrowr! that was a good thing), and his later friend Claire.

Jonathan, Bobby and Claire form an odd romantic triangle where Jon loves both Bobby and Claire together, Bobby desperately wants a sense of 'family' to replace his tragic family history, and Claire is suddenly feeling older and wants a child. They form a family of their own, a unique one, and really, that's all there is to the plot.

It's the characters that make the story interesting. Jonathan's inability to stop looking toward some sort of "maybe someday," future; Bobby, who seems the prince of acquiescence; Claire, who is so unusual at first sight, but fears that she might just be a regular selfish mother after all; and Alison, who really only comes alive after the death of her husband. Alison often feels like an afterthought, but the other three characters spiral around each other.

Cunningham's metaphors are sometimes a bit odd ("cut like an x-ray") and he has a deft touch with the characters and their own points of view - Bobby through Jonathan or Claire's eyes seems such a flat and quietly boring sort, but internally, Bobby is quite the philosopher, for example - and the internal dialogues are very well put together.

But is it enough? I'm not sure. While I liked it well enough, I'm not sure as a character driven story it had enough to the characters. Nothing felt resolved, the ending was quite sudden and jarring, and Claire's denouement seemed almost forced. The only really likeable fellow is Bobby, and even he tends to be somewhat frustrating in his inability to disagree. It's hard to say, really, if my experience with the book makes me want to try more Cunningham or not.

I do think that as an audiobook (I downloaded this from audible.com) it went better than if I'd've read it on my own. The lack of plot or sense of forward motion really would have made it a dry read, and listening to the four voices read their characters was much more enjoyable, I think.

It takes some time to grasp you, but it does!

What did you love best about A Home at the End of the World?

The complexity and simpleness of the troubles the characters are struggling with.

Did the narrators do a good job differentiating all the characters? How?

Loved the sarcasm of the characters.