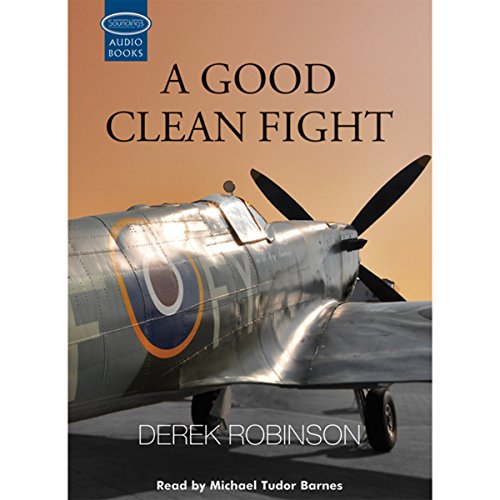 North Africa, 1942. Dust, heat, thirst, flies. For those who liked that sort of thing, it was a good clean fight: nothing to harm but the sand, the enemy and yourself. Striking hard and escaping fast, Fanny Barton’s squadron play Russian roulette, flying their clapped out Tomahawks on ground-strafing forays. On the ground, the men of Captain Lampard’s SAS patrol drive hundreds of miles behind enemy lines to plant bombs on German aircraft. This is the story of the desert war waged by the men of the RAF and SAS versus the Luftwaffe and the Afrika Korps – a war of no glamour and few heroes in a setting often more lethal than the enemy.

How about a Piece of Cake?

Would you listen to A Good Clean Fight again? Why?

Maybe. Maybe not, but only because there are so many books, and so little time.

Robinson's usual cynicism/realism about war and the many types of personalities that make up a group thrust together for a common goal (more or less). Brilliant characterisations as always.

What about Michael Tudor Barnes’s performance did you like?

Well read, and characterised, although a bit toffee-nosed where it shouldn't have been (e.g. enlisted men). Just one bit of constructive criticism - Fanny Barton is a New Zealander, not an Australian. There is a very distinctive difference between how NZers pronounce 'a', 'e' and 'i' and how Aussies do. Something akin to South Africans. Fanny sounds like an Ocker (rough Aussie). Otherwise, great reading.

Would have, if I could have.

Please do Piece of Cake!

More of this author please

I've been a big fan of Robinson's RFC/RAF graphic novels for some time. Often revisit them and still both laugh out loud at the sparkling repartee and cringe at the all too involving scenes of conflict. Narrator Tudor Barnes is simply terrific in tone, pace, comic timing and, the Robinson trademark, conveying irony. The Desert War will never feel the same after this.

Would you try another book from Derek Robinson and/or Michael Tudor Barnes?

Probably, especially if other reviews were good. The reader did a good job with voices, pacing and such, which really helped with this book. Otherwise it would have gotten tedious quickly.

There really isn't a "story." This is one of those that follows a slice of time in the WWII deserts of North Africa before the US got into the war. Normally I'm not a big fan of these stories that use the time, place, external events as both the main character and a substitute for a "story," but this one somehow caught my attention and I just kept listening. There were enough small events on both sides to keep you tuned in. Both the German and British characters are such an oddball mix of good-bad-crazy that I never cheered anyone, but still wanted to see what would happen next.

Probably the last SAS strike on the German fighter base. Incredibly brazen, yet actually well played. Meanwhile the Sr. German officers, just have a seat and watch the show, knowing by the time their infantry gets there, the SAS will all be gone and all the BF109s will have been destroyed.

Was A Good Clean Fight worth the listening time?

Mostly. Could have been a bit shorter and tighter, but I'd probably try another of this author's works.

This would be a good book to augment with a PDF map.

This author does a great job of placing you in the desert showing you what it was like. I was expecting a war story but got nice education on flies, desert terrain, and all sorts of weapons. The smooth part is that setting is more important than the characters and you never notice how much you're being taught. As a WW2 buff the book is satisfying down to the equipment and correct details. On the other hand this author seems to cut most of his characters out of the same cloth and the 'heros are jerks' theme my bug you. The Germans seem kind of stupid and the British seem kind of murderous. I loved the book because it brought the Africa theatre to life for me, and the desert raiding parts were outstanding. My only complaint would be all the minutes I had to listen to of the main German character doing his middle aged angst that never made a point. As a pilot and an aviation buff it can tell you that 'A Piece of Cake' has the better flying scenes. If you like WW2 stories that feel 'real', this is a good one.

Would you listen to A Good Clean Fight again? Why?

yes brilliantly narrated brining the characters to life and making the story easy to follow and a pleasure to listen to.

Good, But How About "A Piece of Cake?"

I enjoyed "A Good Clean Fight" very much. Having said that, I would caution anyone who selects this title believing that it picks up the story of Hornet Squadron from Derek Robinson's "A Piece of Cake" should be aware that this book is far broader in scope and only partially about Hornet Squadron. The story takes place across the vast deserts of North Africa, and involves units of the British SAS, German Luftwaffe, Italian army, American newspaper reporters, army widows fueled with alcohol and sex, and the badly pummeled Hornet Squadron, relegated to the least glamorous and highly dangerous mission in a backwater theater of operations. Hornet Squadron are flying the clapped out and nearly obsolete P-40 Tomahawks, not the elegant Spitfires, as depicted on the cover photo.

Robinson does a nice job weaving several plots from both adversaries of the desert war together. As in A Piece of Cake, he pulls no punches in describing the brutality of war, nor shy away from depicting those characters who revel in the destruction and killing. It's an unblinking look at the human toll of war, especially the cost to the human psyche.

As a retired military pilot, I found A Good Clean Fight to be enjoyable book that flows well and has well developed, interesting characters. Although not quite as thrilling and captivating as A Piece of Cake (at least to my taste), it's still worth a listen.

A Good Clean Fight was an interesting look at lesser known types of warfare in a lesser known theater of operation. I enjoyed it and recommend it.

Would you try another book from Derek Robinson and/or Michael Tudor Barnes?

no i don,t like the he said story,s you don,t need to put he said after every sentence and if the s.a.s had that big a food larder they would need a roadtrain to move around 20 minute,s in is enough

Would you ever listen to anything by Derek Robinson again?

i can,t tell as i haven,t seen the print version

disappointment from the start it make,s the soldier appear to be stupid

no i think that covers it can,t return it so it will sit in library in rubbish deptment

Anything but a Clean Fight

What made the experience of listening to A Good Clean Fight the most enjoyable?

The atmosphere created both by the author and the narrator. The descriptive narration of the action with great detail of individual relationships add greater depth to the overall story.

\the politics of the three basic units in the efforts to succeed, The German Intelligence, the SAS and the Desert Air Force

What about Michael Tudor Barnes’s performance did you like?

The atmosphere he created in the various areas of the story line. His voice control and change in tempo bought the story alive.

Not such a Good Clean Fight

This is almost classic Derik Robinson, a wonderful tale of war between men and war against the desert as well as the emotions of men in battle. Truly a very good read.

Can’t believe just how silly this is , just a load of “ a mans got to do what a mans got to do “it’s so dated you can hear John Mills trotting out every cliche from films made seventy years ago so unless you’re cringe worthiness is dead you need to give this a miss .

a very enjoyable audiobooks, brilliantly narrated and loved the various accents. 5 stars all around