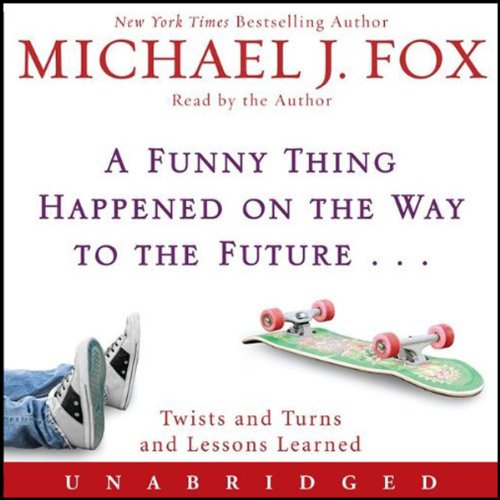 Michael J. Fox abandoned high school to pursue an acting career, but went on to receive honorary degrees from several universities and garner the highest accolades for his acting, as well as for his writing. In his new book, he inspires and motivates graduates to recognize opportunities, maximize their abilities, and roll with the punches - all with his trademark optimism, warmth, and humor.

In A Funny Thing Happened on the Way to the Future, Michael draws on his own life experiences to make a case that real learning happens when “life goes skidding sideways”. He writes of coming to Los Angeles from Canada at age 18 and attempting to make his way as an actor.

Fox offers up a comically skewed take on how, in his own way, he fulfilled the requirements of a college syllabus. He learned economics as a starving artist; an unexpected turn as a neophyte activist schooled him in political science; and his approach to comparative literature involved stacking books up against their movie versions.

Replete with personal stories and hilarious anecdotes, Michael J. Fox’s new book is the perfect gift for graduates and fans.

A Funny Thing Happened on the Way to the Futureに寄せられたリスナーの声

Michael again entertains and delights with his playful reading. Enjoyed hearing (between the lines) the maturity, perspective and focus he's developed over the last few years. I actually think I could listen to this again and that doesn't happen often.

I loved this and have listened too it a couple of times! Fox's narration is swift, funny and too the point. Very easy to listen too.

Let's hear it from M J Fox himself

Would you listen to A Funny Thing Happened on the Way to the Future again? Why?

Michael is very open about things and knows how to tell a good story.

What does Michael J. Fox bring to the story that you wouldn’t experience if you just read the book?

no one can tell the story better than himself

I had lots of laughs when listening, but also learnt to know that he had a tough start in his career.

M J talks a little fast but that's not a problem for me, if that's a problem for you just rewind and listen again, it's worth it.

Back to the Future

I enjoyed listening to Michael retell his story with all it's up and downs of " life". As always he provides the "audience" by utilizing his insightfulness, humor, and innate ability to deliver the lines at the precise moment for effectiveness.His willingness to share his story ,drives home the purpose of this book-the notion of acceptance promotes self worth.

All Books are absolutely worth the read

I remember coming across MJF books in my early Audible days... I liked his movies and had recently read another actor”s biography and thought... how bad can this one be...
I highly recommend reading his books, because he has a way of bringing his experiences across to his readers as very relatable if that is the word for it.
He does not see himself as someone above the rest of the world, but rather understands and brings across that understanding of what and who he is, and furthermore the price he paid and more over his loved ones paid for him to be who he is. Despite that, through it all, his constant climb back to finding his optimism, despite very dark times never subsides. And that in itself is a message to remember. It is a little bit like getting to know the elusive boy next door who carries a bright smile and a heavy burden, and gets up every day curious of what comes next.

I have always admired Michael J. Fox. I marvel at his strength and optimism. I only wish this book was longer.

MJF takes us on ajourney to look at life and ourselves, a look in the proverbial mirror and how to be real about today.

A very quick and easy listen. I would recommend to anyone who needs a lift to their perspective, a graduate who is about to head out into the world or someone who is trying to find their path. it is a reminder that life isn't easy or simple but it can be filled with accomplishment and satisfaction.

This is a book every graduating senior should read. It is a quick read and the audio by Fox is wonderful.

A lovely, light appreciation of life in all it's guises.

A guide for life

MJF, as most of us with chronic degenerative illnesses (mine's MS) has a very philosophical slant on life. Instead of whining "Why me?" we shrug our shoulders and say "hey, why NOT me?" The author delivers his life lessons with his usual good humour and accepting style; I have a son due to start Uni next year - I'll be packing him a copy..

A humble and humourous look at the life of an actor overcoming life's setbacks. Very enjoyable!

The thing that caught my eye on this particular occasion and is a pet favourite of mine , when an author such as Michael ,actually narrates his own book and tells you his story. Huge fan!