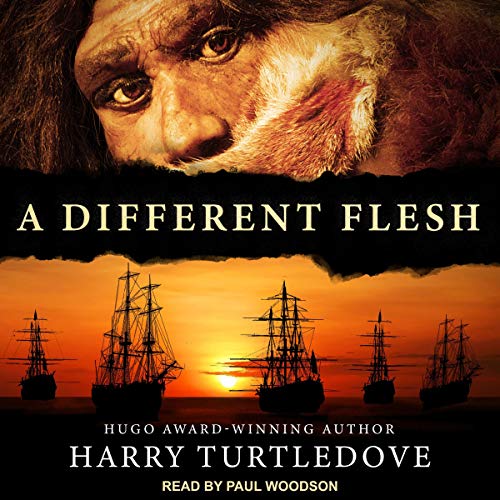 This novel by the New York Times best-selling "master of alternate history" explores an America reshaped by a twist in prehistoric evolution (Publishers Weekly).

What if mankind's "missing link", the apelike Homo erectus, had survived to dominate a North American continent where woolly mammoths and saber-toothed tigers still prowled while the more advanced Homo sapiens built their civilizations elsewhere? Now imagine that the Europeans arriving in the New World had chanced on these primitive creatures and seized the opportunity to establish a hierarchy in which the sapiens were masters and the "sims" were their slaves.

This is the premise that drives the incomparable Harry Turtledove's A Different Flesh. The acclaimed Hugo Award winner creates an alternate America that spans 300 years of invented history. From the Jamestown colonists' desperate hunt for a human infant kidnapped by a local sim tribe, to a late 18th-century contest between a newfangled steam-engine train and the popular hairy-elephant-pulled model, to the sim-rights activists' daring 1988 rescue of an unfortunate biped named Matt who's being used for animal experimentation, Turtledove turns our world inside out in a remarkable science-fiction masterwork that explores what it truly means to be human.

Great story. I can see a less developed Harry Turtledove in the writing. It was an interesting idea. I think in 2019, this story would be more detailed and probably more than one book. It’s always been my belief that we humans were the cause of the decline of Neanderthals. We tend to kill off all people who are different than us. I can just imagine a final book.

Let me preface by saying that I usually love Harry Turtledove's books. Sadly this book (more a series of several minimally connected vignettes) did not fit that norm.

The premise (that the discovery of the new world included the discovery of a new (albeit old) race of what the reader will understand are Neanderthals could have led to quite an interesting novel. However Turtledove did n9t fulfil this promise.

Fails to Be Compelling and Worth Listening To.

This book includes very creepy interspecies sex (humans with Homo Erectus) in one chapter, includes needless sex in another chapter, a boring made up legal court room drama in another chapter, and in all prior to the first two chapters & situations mentioned fails to create an exciting or scary alternate history world setting where humans find an ancient ancestor of modern humans still living on the American continent. It didn't live up to my expectations.

Quite good, well worth a credit

I really enjoyed this. Turtledove takes the story a lot of interesting directions. It was well worth the credit and the time.

Went in with open mind and found characters somewhat interesting, but not well developed. The story went along an alternate history timeline in patches as it switched between a character from one era to another. I listened to the complete story but finished unsatisfied at the end.

I loved this book. The story drew me in immediately and was interesting from start to finish. This was my first Harry Turtledove book , I can’t wait to listen to another!

A good insight with fantastic diversity of stories

Genuinely a great read/listen. Each story with a different epoch offers a lot to think on. Would recommend to all!