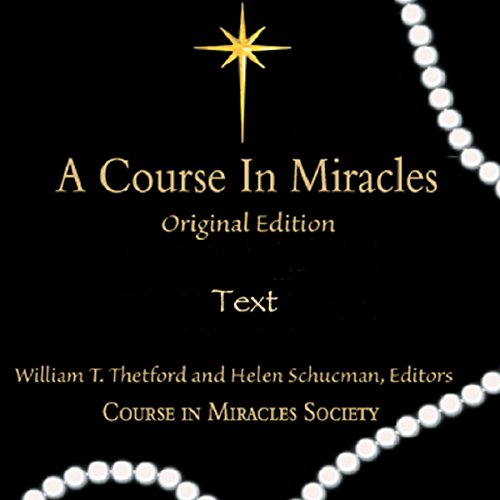 A Course in Miracles

Taken from the original manuscript for the Course, the only editing that has been done to this great spiritual classic has been to correct occasional typographic and spelling errors and to render capitalization and punctuation consistent.

The volume that you will be listening to here is the Text, which is the first of the three-volume set: Text, Workbook, and Manual for Teachers. These volumes were scribed by Helen Schucman with the help of William Thetford, as she listened to an inner voice that identified Itself as Jesus.

The narrator Martin Weber, [maz], is a longtime friend and member of CIMS Europe, a musician, and, of course, a student of A Course in Miracles. Maz sits with the material in meditation before he begins his recording and then adds music that he has composed for a perfect accompaniment.

Prefer this narrator to one of a similar title

I recommend this narrator over the narrator for the "Audible only" version of this book.

This book has many versions: Original publication, Original text but published much later, summary, etc. I recommend this version, as I believe it is closer to the original text and intent. Also, the narrator is much better.
A similar version of the text is narrated by a many monotone/ computer sounding vice, that makes this material difficult to parse and comprehend.

There is 1 chapter that was recorded with an echo setting, hence it is difficult to understand, and should be re-recorded. However as it lasts only a few minutes of the something like 45+ hour recording, so it's hardly a major complaint. Know that it is a one-off.

An actual issue, though is the chapter titles themselves. The listed titles do not correlate to the actual chapter titles. So it is difficult to cross reference!
Honestly three is no viable excuse for Audible to Not fix this! Indeed the listed "titles" are plain wrong.

That said, the book, content, narration voice, and narration quality is great. And the price is excellent.
I do recommend this particular title.

I cannot say enough good about this book and this Audible.com recording! I know my growth toward Christ consciousness has immensely advanced by constant listening. Every time I listen, more of the wonder, wisdom, peace, joy, love and grace of God gains permanence within my eternal awareness! Thank you! Thank you! Thank you!

The Course in Miracles has a wealth of information but from an audio book standpoint, I can't listen to this. The tone has no real inflection and is quite boring to listen to. It's hard to be inspired by the words because of the tone. I got it to supplement the book I received from the library but again it's a rough listen.

Narration of ACIM leaves much to be desired

This narrator's voice rhythm is odd. His inflections seem unnatural. I shut it off after listening to just one section. I plan to delete it from my library straightaway.

I love the background music. It enhances the listening experience a great deal. Listening to this audio book is so soothing as if I'm drinking a cup of hot chocolate in a cozy cold evening next to the fireplace. I enjoy listening to this at bedtime. It's my adult lullaby. Definitely one of my best purchases on Audible so far. If you're a Course in Miracles fan, I highly recommend it.

Course is amazing! This reading of it is Not

The creepy whisper reading personality and music added in narration of this reading are unnecessary and distracting from the work. This version is also way too slow can’t believe they added background music🤦🏻‍♀️ Get the blue version here on audible read by Jim. I’m going to try and get a refund for this purchase.

The music is distracting

I've wanted to read this book for a very long time. This edition has music and sounds in the background. It's incredibly distracting, and it feels overdone. It's trying to make it spiritual, rather than allowing the narrative and message convey whatever spirituality you want to make of it. I'm going to just buy the book and read it.

I could not get past the first hour. The audio mix emphasizes deep sounds, with lots of spa-type music over it and interspersed between phrases. It is difficult to understand the narrative due to poor sound mixing (I suppose to make the voice sound more authoritative), and the music is simply too loud and too long. In my view, a sentence should not have pauses long enough for interspersed music. If the sentence is communicating something, I want to hear it and think about it. Maybe it's just me.
Perhaps you could listen to this while meditating or doing yoga, but it's not for me at all. I regret this, because I was curious as to what the Course in Miracles is about. What I learned, it's about slow speech and spa music.

the music was driving me nuts. Without it, maybe it would be alright. one star.

this title impressed me with the positive message & intermission of music included was great!

Unfortunately this version is set with background music which withdraws the attention from the text and message. Further, the text spoken does not correspond with the text as published.

This version has absolutely nailed the Course for me. if you are new to the Course I suggest you listen any and all books about the Course before you delve into this. Truth is always amazing

music in the backgroud that is very distracting

it has one guy with different voices, it's like it was done from a computer which is very distracting. music in the background is also distracting.