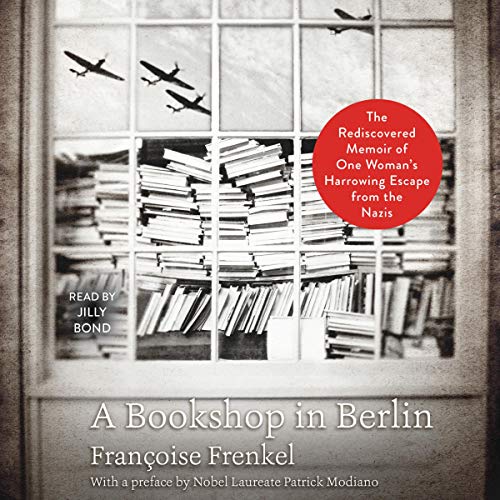 Winner of the JQ-Wingate Literary Prize

"A beautiful and important book" (The Independent) in the tradition of rediscovered works like Suite Française and The Nazi Officer’s Wife, the prize-winning memoir of a fearless Jewish bookseller on a harrowing fight for survival across Nazi-occupied Europe.

Françoise’s dream finally shatters on Kristallnacht in November 1938, as hundreds of Jewish shops and businesses are destroyed. La Maison du Livre is miraculously spared, but fear of persecution eventually forces Françoise on a desperate, lonely flight to Paris. When the city is bombed, she seeks refuge across Southern France, witnessing countless horrors: children torn from their parents, mothers throwing themselves under buses. Secreted away from one safe house to the next, Françoise survives at the heroic hands of strangers risking their lives to protect her.

Published quietly in 1945, then rediscovered nearly 60 years later in an attic, A Bookshop in Berlin is a remarkable story of survival and resilience, of human cruelty and human spirit. In the tradition of Suite Française and The Nazi Officer’s Wife, this audiobook is the tale of a fearless woman whose lust for life and literature refuses to leave her, even in her darkest hours.

Fine memoir. Narrator a bit over the top.

I think I would have enjoyed it more if the narrator had taken it down a notch or two with her dramatics. I kept forgetting it was non-fiction with her theatrics.

I respectfully disagree with the other reviews. This book was a beautifully written retelling of a harrowing story. It provided excellent information from a point of view I hadn’t heard before while still managing to read like a novel. I was on the edge of my seat several times. The delightful narration really added to the story. An absolute treasure of a book!

How very persistent she was.

Loved the story and the reader was fabulous. If you're into WWII history, this one should be on your list

it was really sad

its awful to hear about how people were treated back in the day. but grateful for people to write about their problems so other people can learn from it.

incredible, what so many had to go through. very interesting. a good book to keep their history alive

The narration of this book is TERRIBLE! The narrator is apparently British, so every time she is reading dialog involving French people, she reads it with a heavy ENGLISH accent. I found this so off putting that I could hardly finish the book. Plus, the book is written in a style that reminds me of 18th century English society. I can't in good faith recommend this book.

Inspiring and compelling it felt as if I were with her on her journey to safety.

I found this book quite by accident when I was searching for a different novel regarding the holocaust.

The story was told beautifully and I became quite attached to her story. Next time I'm in Paris I plan to look up some of the locations mentioned.

I was sad to get to the end of this one!

Acting (narration) could be way better

The vocals (i.e. the acting) of this book is not very good at times. Overall, the actor seems to speak French, but cannot or does not speak English with a French accent. It would really help distinguish between voices if different accents were used, which other actors seem capable of doing. Also, the tone of voice is at times very difficult to listen to. The story is pretty amazing, and I understand that it is kind of like a diary or real life account, so it's understandable that it doesn't always read like a novel. The chronology at the end kind of confused me because the writer makes no mention of a spouse, but the chronology mentions a man in exile who was her husband. I'm still a little confused about that.

It seemed the character was on an adventure, and it really had nothing to do with a bookstore beyond the beginning of the book. She certainly had it easier than most. it seems she was only anxious and truly had it rough the last quarter of the book. She writes a little too cheerful. certainly NOT like other WW2 survivors... odd... very odd...