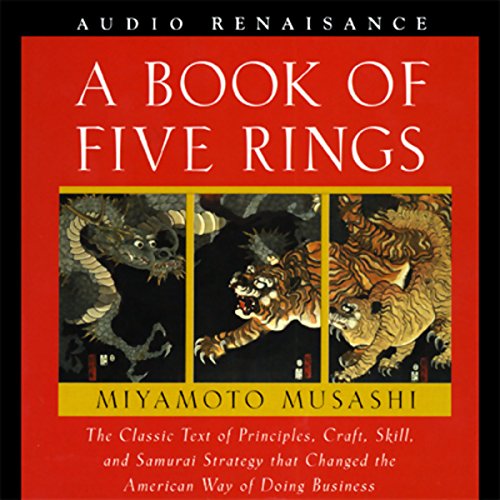 A Book of Five Rings

It's Japan's answer to the Harvard MBA.

Written over three centuries ago by a Samurai warrior, A Book of Five Rings has been hailed as a limitless source of psychological insight for businessmen  or anyone who relies on strategy and tactics to outwit the competition.

Miyamoto Musashi was renowned in his own time as an invincible warrior, a master artisan, an author, and philosopher. Today, his philosophy is still revered by the Japanese and used as a guide for daily decision-making  and business strategy. He wrote A Book of Five Rings not only as a thesis on doing battle, but also as a way to approach all aspects of life: "any situation where plans and tactics are used".

When A Book of Five Rings first appeared on North American bookshelves in 1974, its message took the business community by storm. It provided insight into the then-emerging Japanese influence and offered a new way to think about business. It instantly became a vital tool for assured success and has remained so ever since. The principles in this work are as true today as they were over 300 years ago, and are as valid for business negotiations as for hand-to-hand combat.

Based on the principles of Zen and advocating a hands-on approach to mastering the skills needed for winning, A Book of Five Rings is very likely the most perceptive guide to strategy ever written.

Teachings of a Legendary Master

These teachings are not meant to be taken literally. Taking them literally is not the way. Reflect and ponder, analyze, analogize, metaphorize, and begin walking "the way".

great for applying strategy and knowledge from the samurai to modern day applications. give it a go

I purchased the audio and kindle books. Years ago I purchased two Ken Ryu katana swords through Amazon, and frequently practice Tai Chi and sword techniques with my swords. I also listen to the Tao Te Ching, Dhammapada daily, and the Art of War. I say all this up front to make my evaluation of this book more relevant. If one is familiar with the teachings this book is based on and one knows how to wield their mind like one wields a hand held weapon, this book makes more sense. I have also been involved in Karate, Jui Jitsu of and on and so for me, I can picture what Miyamoto Musashi is saying. Even if you just pick this book up, do as he says. Read, picture in your mind, and reflect.

One of the Best!

Fantastic book! Most books you can read once and burn. This one gives the reader something to think about and new insights each time you review it. There is a reason this book has lasted over 400 years and there are many reasons why the author won over 60 life-death battles. Highly recommended in both audio and book format.

A Book of Five Rings

I love having this book to listen to while I drive and work.

There is so much to learn each time I listen. I highly recommend this book!

Things that make you go Hmmmm

The book is fine, the narrative is fine, the Japanese philosophy lost me. I listen to it once in between each of my other books hoping I might grasp something.

This book is based on fighting; actual hand to hand combat. I see no way to incorporate it in the business world.

Not strategic at all

This book has got nothing to do with "Strategy" as we perceive it in today's western world. You need to be a swords man to understand how Musashi refers to strategy: a posture and both action and reaction in a hand-to-hand combat using swords.
The book's description is highly misleading, probably due to literal translation.

Even the author wrote down that the majority of his techniques cannot be explained in detailed writing and basically have to be mastered by practice with the sword.

There are a few minor nuggets that elude to some Zen spirit, but they certainly don't warrant your time and money.

This book is unfortunately of no use to our current time (in any context for that matter), unless you plan on negotiating your next business deal using 'long swords' and 'winning' the deal, i.e. cut, slice, hack, or kill your opponent.