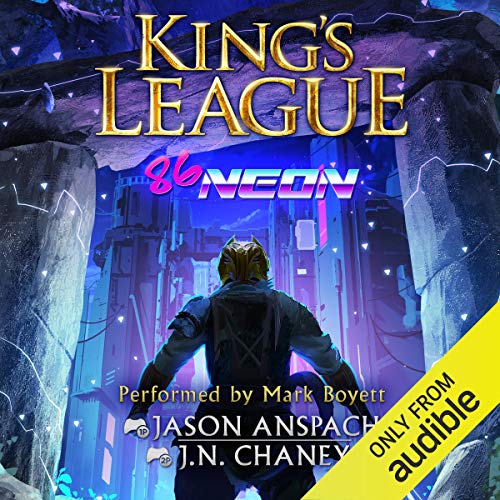 Success brings its own troubles.

Dirk's epic run of success in King's League has drawn new gamers to Dawnshire, but not all of them are there to play nice. Rumors about mysterious Graydon's Armor pieces are quietly spreading across the Realms. It isn't long before someone attempts to take away everything Dirk possess as powerful forces conspire against King's League's newest player sensation.

The game quickly turn personal as hidden threats work to make Dirk's life miserable in and out of the game. Dirk follows the clues to King's League's cyberpunk expansion realm, 86-Neon. Fighting for survival in a world of flying cars, powerful weapons, and ruthless crime, Dirk must learn to rely on more than just himself if he hopes to survive this thrillingly hilarious second installment of King's League!

Mark is a great narrator!

Really enjoyed the book! Hope the next one comes out soon. If you like litrpg give it a try.

From dungeon dunk to cyber punk

A nice transition from a low-tech medieval realm to that of a techno cyberpunk environ. What's next steampunk? Kidding aside, Jason Anspach and JN Chaney teamed up to create a fascinating follow-on book to the series. I found their effort to transform existing weapons and armor from one realm to the other with similar damage and shield characteristics well done and what one would expect from an online game that allows players to move between realms without having to start anew. Even so, there did appear to be some weapons available in 86-Neon that were more devastating than that of "normal" realm.

The story itself played out well; albeit taking a bit longer than expected to enter the world. There also appears to be at least 3 new tier 1 players introduced even though their game involvement was brief and spotty. One of them was a low-leveled and a bit shifty (similar to a character-type Mark Boyett performs in other authors SciFi books) who provided some realism to the group's personalities.

Mark Boyett performance a definite plus to the story telling, as is his forte.

Well worth the credit and a desire to impatiently wait for the next book in the series.

takes time to take off

if you read the first, it flows very smoothly. although I loved the play of different angles, I was hoping for some.e more of neon. the story did come together beautifully and yes, I am looking forward to the next book to come out.

one of the best video game series I've ever seen

I'm really picky about my lit-rpg books, but so far this series has kept me hooked. It's engaging and fun in a way that you don't usually see. And I can tell the writers are gamers. That's the key. So many of these writers nowadays just write about games and you can tell they've never played any....or it's been years and they're out of touch. That is NOT the case here. Chaney and Anspach have played a lot of video games and it shows. I especially like the little nods to smaller franchises or even the big ones like WoW or Zelda.

Please keep these books coming. The quality is unparalleled.

Gave the MC a chance through the first book and half of the second because I did like the story but I simply can't get over how immature and just plain stupid every single person in this book is. The MC is so childish and naïve that it's similar to a toddler being given a fortune suddenly.

Anspach and Chaney do it again

This follow up to King’s League is another great book by this duo. They did work hard to keep it fresh. Albeit, the progression (levels and item advancement) was a bit lacking.

Hats off to you two and I will be awaiting the next one. Now to wait for your other book incoming, Wayward Galaxy 2.

Great second book with enough new concepts to be great like the first book!

Each book in the series just gets better! Really enjoying the character and land development. I cant wait to see what will happen in book 3. one of my new favorite series.

If you can make it through the first 30 boring chapters, the last 5 are not bad.

I really enjoyed getting to see one of the other realms in the kings league world! I look forward to seeing more of them in future books!

Loved this! As a non-gamer I was skeptical, but what a great story,. Draws you in and takes you on a fantastical journey. Just brilliant. Enjoy!