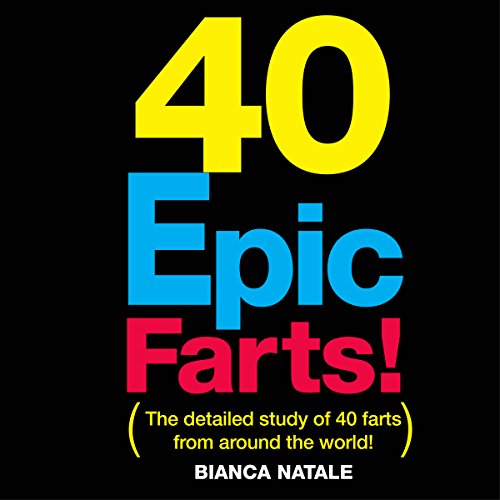 40 Epic Farts: Chronicles of an International Fartologist and His Global Findings

Dr. Squeaks holds a dual British-American passport, which allows him access to parts of the world often closed to holders of one or the other. In this chronicle, which is in no particular order, you'll find:

You'll hear about the above and many other encounters I have had with farts all over the world.

Finally, he closes his chronicles with an account of a possible encounter with one of the urban legends spewed in the wake of the nuclear meltdown at Chernobyl.

Reordering the farting habits of humanity is a full-time chore, and he has traveled the globe studying and recording where the fart occurs.

Many of the occasions are humorous, some serious, and a few are actually terrifying. You'll meet 40 farts of the world that he has recorded specifics on for your amusement, education, and enlightenment.

I thought the narration was brilliant, and subject matter was very entertaining. I'd like to hear more from the narrator. He really sold me that he has traveled the world as a fartologist.

What did you love best about 40 Epic Farts: Chronicles of an International Fartologist and His Global Findings?

This isn't a complex story, but the little bit of character development it has, and the way the character is brought to life through skilled narration, made me wish it was. As is, this book would be more appropriate as a bathroom book than an audio book; however, I could see some applications of the audio book that could be a hit. For example, as a soundtrack played in the restrooms of a hip establishment...

The little bit of character development made Dr. Squeaks seem like the real subject I wanted to know more about. Sure, the subject matter was funny, but I think it would have benefited from more story-telling around the experiences and unique character of Dr. Squeaks.

The narrator's robust voice and clever accent was so true to Dr. Squeaks' eccentric character and brilliant mind that it seemed no one but Dr. Squeaks himself could be doing the narrating.

I hope this author and narrator will continue to tell stories of Dr. Squeaks!

The author has raised potty humor to new heights. The narration was excellent! A fun read.

I felt like I just traveled the world in this story. The farts were epic and the narration was epic. The stories were great and now I will be on the lookout to see if I can spot one of these farts. The narration made this story complete and hilarious. The accent was excellent.

The voice is perfect .. very enjoyable

I would recommend this to a friend because I like the narrator.

What was one of the most memorable moments of 40 Epic Farts: Chronicles of an International Fartologist and His Global Findings?

A funny voice which I enjoyed.