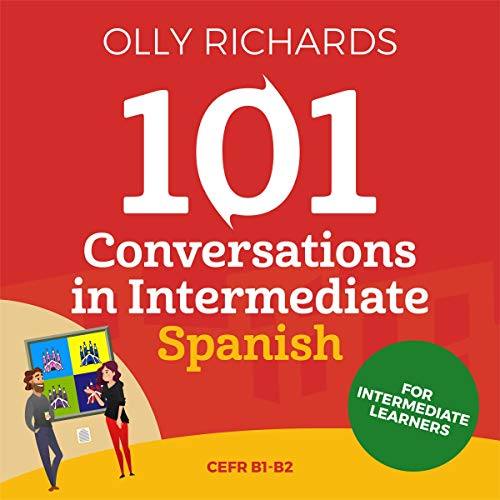 Improve your spoken Spanish from home with 101 real-world conversations in intermediate Spanish.

Real Spanish people don’t speak like your textbook…so it’s no wonder you feel unprepared when it’s your turn to speak! This book fixes that. For the first time, you’ll learn to move beyond beginner level and speak Spanish in the real world! With 101 authentic conversations in intermediate Spanish, you’ll become confident in the words, phrases, and expressions you need to communicate like a local.

101 Conversations in Intermediate Spanish transports you into a real-world story that unfolds between six Spanish characters, told by the people themselves. Over 15,000 words of real Spanish, you’ll immerse yourself in a gripping Spanish drama and get an education in natural Spanish in the process. Here’s what you’ll get:

The story is set in Spain and includes expressions that are typical in Castilian Spanish. However, since the conversations use mostly “neutral” Spanish, you’ll have plenty to learn, whether you’re learning the Spanish of Mexico, Colombia, or Costa Rica.

Created by Olly Richards, internationally-renowned language teacher and author, 101 Conversations in Intermediate Spanish gives you an experience in real Spanish that you won’t find anywhere else. You’ll be better prepared for using Spanish in the real world, speak with more confidence, and take a giant leap towards fluency in Spanish!

Scroll up and grab your copy now!

This is a very exciting story and a wonderful way to brush up on your Spanish. I couldn't stop listening. It was that good!