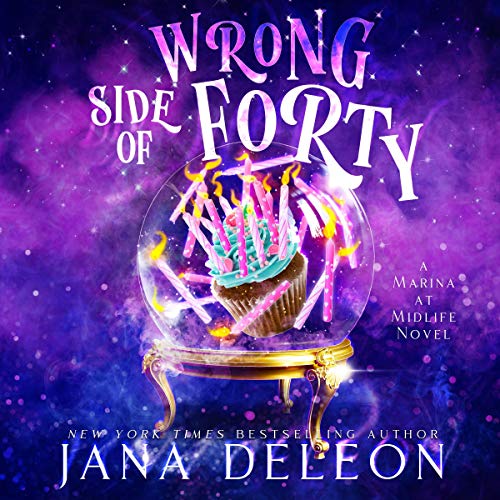 It was a day like any other day for Marina Trahan...until she caught her husband in bed with another woman. Before that eye-opening wake-up call, Marina would have described her life as average or uneventful, maybe even boring. But now, chaos and confusion reign supreme. She’d expected to slide through midlife with her unwanted extra pounds, chin hair, and hot flashes and move somewhat gracefully into elastic-waist pants and having no verbal filter. But with a wayward husband, a high-maintenance daughter, a lackluster career, and a crazy mother all weighing her down, Marina is ready to wave the white flag of surrender.

Then an intriguing stranger named Alexios shows up out of nowhere and insists she is descended from a goddess and is the only person who can save the world from certain destruction. She has roughly a week to do it. Solving a centuries-old mystery seems like a more interesting proposition than the other situations Marina is facing, so she accepts his challenge. But her search for a magical item of power reveals far more about Marina than she ever knew. Maybe enough to save the world. And even herself.

sample did not indicate the poor narration. love this author but Audible needs to significantly improve narrators. Cassandra Campbell was definitely better for this author's style. I can't review the story or overall because I couldn't tolerate the voice and get past the first 3 pages

First, my respects to the narrator, but it's almost unbearable to hear. Second, nothings happens, for chapters, I found myself skipping them and finding very little had changed. Do not recommend it. Love the Shaye Archer series but will not be coming back to this one.

Loved it! had me hooked all the way. Funny, fell in love with all the characters.

Watered Down version of Miss Fortune

I am a fan of the Miss Fortune's books So I was ready to be entertained by this one. Unfortunately I did not see the small print of an additional author's name. The story dragged. filled with contrived coincidences, self- introspection that hit you over the head in every chapter. The characters were flat and one dimensional. The good points; the message of being happy in your own skin is a worthwhile objective. Unfortunately you have to read this book to hear it. Pick up a magazine, much less painful.

Overall the book was not great. I would call this 'light' paranormal women's fiction. The storyline was more about small town drama and gossip and it seemed the author decided to throw in this paranormal side story. The paranormal aspect seemed childish, stupid, and not well thought out. T did not draw me in like other stories have done. I was not intrigued by the main character's paranormal aspect one bit. The book would have been better if the author left out the paranormal storyline.

This is a must read/listen for the new PWF genre. Can't wait for the next one to come out!!

Jana is the best

There has not been 1 of Jana’s series that I do not like. They are all great & this did not disappoint. I also love the narrator.

Story is just so boring

The main character is likeable, but the story is so exhausting. It's a stream of one problem after another with no relief.

Loved this book. Great characters and story. I can't wait for the next book in the series.

Marina maybe on the wrong side of 40 yet delievers a story in Last Chance LA which will have you speeding thru the book to the last page. Marina has a life most of us can relate. She works hard at her job and for family. Life changes after getting off work early and leads to a chaotic, suspenseful and thrilling time.

Looking forward to #2 in the series.

I’m a big fan of Jana Deleon’s Miss Fortune series and this series has the same type of eccentric characters and strong friendships. However there is a supernatural element added that feels like a very strange bolt on. It doesn’t really influence the plot and feels like something added to an existing story to make it ‘different’

Wrong side of forty

Loved this book. I listen to it when commuting and I laughed out loud at some of it. I like the characters of the sisters and the quirky magic bit. I will re-listen to this many times

Ok to listen to in the bath

It was an ok book, won’t set the world on fire and starts normally but takes a weird turn.

I laughed and laughed so much throughout this book. the heroines were fabulous, the villains were just the right balance between reality and OTT, the journey was hilarious! The paranormal angle added some humour and tension that I rather liked, though I do wish we'd seen more of Alexios. A really good, light and truly enjoyable read. Please say there'll be more in this series - maybe Dotty's family line really are fairy godmothers? Just a thought...

Brilliant book! Sooo much fun... I can’t wait to see more books in the series ❤️

It’s no Fortune or Sinful, but there is potential

It took a while to get going, introducing each character in a long meandering stretch. It also took a long time to get to the point of the story and kept diverging in tangents. I shall reserve judgment after book 2! Worth pursuing, given the track record of Ms DeLeon.