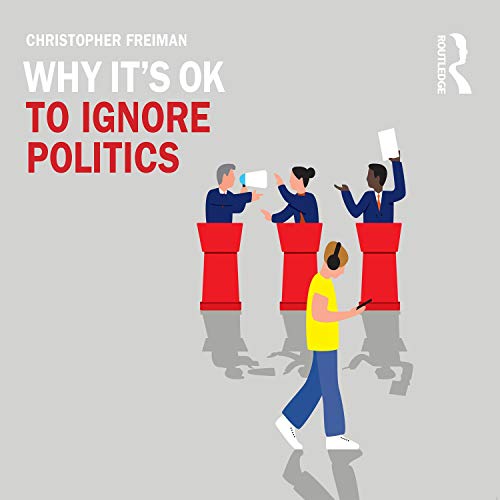 Do you feel like you’re the only person at your office without an "I Voted!" sticker on Election Day? It turns out that you're far from alone - 100 million eligible US voters never went to the polls in 2016. That’s about 35 million more than voted for the winning presidential candidate.

In this book, Christopher Freiman explains why these 100 million need not feel guilty. Why It’s OK to Ignore Politics argues that you’re under no obligation to be politically active. Freiman addresses new objections to political abstention as well as some old chestnuts ("But what if everyone stopped voting?"). He also synthesises recent empirical work showing how our political motivations distort our choices and reasoning. Because participating in politics is not an effective way to do good, Freiman argues that we actually have a moral duty to disengage from politics and instead take direct action to make the world a better place.

Why It's OK to Ignore Politicsに寄せられたリスナーの声

It's an earful on how dumb you are

This book has a parent scolding tone to it. Most of it is telling you how much you don't know and how much the author knows. He's brilliant don't get me wrong but it's a little too much. Halfway I found myself with the same face I did when I was getting lectured by a teacher or oarents about how stupid my decision are. Also the book is one sided since its an argument for not voting. The best part of the book is about effective altruism so get Peter Singer's book instead. I suggest just seeing Richard Dawkin's youtube video about brexit. Lot shorter and same message. Like the author likes to say, there are things you should be spending time doing better than politics (or reading this book about politics.) The narrator was great.