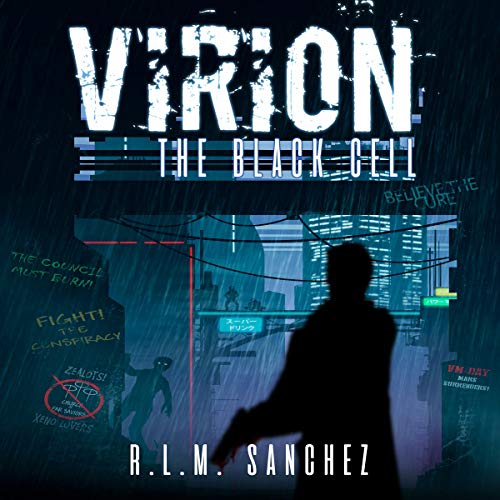 A disgraced Mars colonial detective must find a scientist's killer. If he fails, Earth will fall to a viral epidemic.

The year is 2475. Earth has been plagued with an ancient virus, killing anyone who breathes the unfiltered air. When an alien scientist finds that a cure is miraculously within reach, after centuries, she and her staff are killed and the research destroyed by a secretive group of elite commandos.

The detective is given a second chance when he's recruited to investigate, but when he finds animosity between the alien race and humans, corruption within powerful corporations, and nightmarish mutants prowling the lawless undercity depths, his path to redemption will be challenged as his buried past resurfaces.

Will the Martian detective find those responsible who stole the cure in time to thwart a viral outbreak of ghoulish mutations? Find out in the debut novel of the Virion series. The Black Cell offers the fantastic blend of a science fiction mystery and dystopian thriller!

This book was good. Really good. I don’t like to start new series, I took a chance with this one based on the synopsis and I am glad I did. The story starts in a research facility in the distant future and at times it seems like it will be just another version of the zombie apocalypse. Then things break down like they are destined to do and what unfolds is a very interesting conspiracy, mystery, and post-apocalyptic jaunt through old destitute Earth. But not a zombie book. I love that it isn’t a zombie book. This is just the first book of four, but now I need to get the rest. I got the audiobook and the narration was absolutely fantastic. Luis Bermudez did one of the finest narration performances I have heard in a long time.

This audiobook was given to me at my request for my free and unbiased review.

This far future (2400s) story is a great gripping and exciting story. Our main character is a former war hero whose currently a discredited police officer. In this world a deadly virus is spreading like wildfire on Earth infecting and mutating everyone, the mutants then causing their own issues. It's this backdrop where the main character and another equally unlikely protagonist (the veteran of an old war) are brought together to do some detective work and figure out what happened in a massacre at a research facility and see what they can find out about the disease.

From there it's super high tension and action with a lot of intrigue on a bunch of different levels and some balanced backstory both of the main characters (who are interesting and fleshed out) and of the virus itself (which of course is the great unknown). It keeps up until the end, and happens to be the first in a series so I'm definitely interested in continuing the adventure in this interesting future world.

I received the review code for this audiobook at my request and have voluntarily left this honest review.