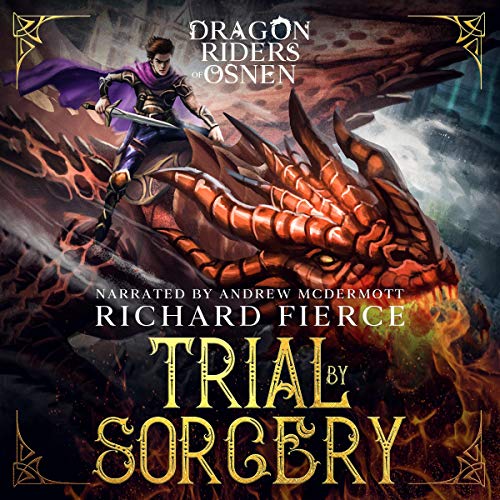 Dragons can be dangerous...

...if you don’t bond with them first.

Eldwin wants to follow in his father’s footsteps and become a Dragon Guard, but not for the glory. With his family dead and their lands dying, the opportunity to join the dragon rider school is all he has. But before Eldwin can bond with a dragon and guard the skies, he must pass three tests to prove his worth.

He’s determined to pass, but his maimed arm is a constant reminder of his disadvantage. Will the obstacles Eldwin faces keep him from reaching his dreams, or will he finally see what it’s like to ride the skies?

Trial by Sorcery is the first episode of the series Dragon Riders of Osnen.

I came for the dragons...

Honestly, I probably would have enjoyed the book more if i hadn't spent the entire time waiting for the scene on the cover. It didn't happen, so manage your expectations. The TITLE of the book is accurate. This is the story of the MC testing to become a dragon rider and it's pretty good. It was entertaining and kept me interested, but i found some of the decisions made by characters unbelievable and only served to put them in the path of the story. The narrator was pretty good; not my favorite but he didn't detract from the story. Overall i think the 3-star "pretty good" rating is all i can give this one. I am interested enough in the story to try the next in the series, hopefully it will take things to the next level.

if you enjoy coming of age fantasy with magic, dragons and action, you will enjoy this book. It has a good, fast paced plot and an unexpected ending. Mr. McDermott's fine narration and fitting accent make it all the more delightful. l am greatly anticipating the next volume.

I really like it! I am giving it to my sister I am sure she will love it!

The story was about s boy trying to be a dragon rider. It was a sort of coming of age tale. I would recommend it. Really fun to listen to and extra nice not to have bad language spoil it! Great narration by the way.

Trial by Sorcery is the first of Richard Fierce's books that I've read. It's a solid story, well written, engaging, and maintains a steady pace. Fierce is a good writer and grabs the reader's attention from the beginning. The story began with Eldwin, the underdog, standing up for someone who was being mistreated and then being bullied himself. While not born into nobility, Eldwin's father had been part of the Dragon Guard, which gives Eldwin hope that he can also be a dragon rider. In order for this to occur, Eldwin must be admitted to the dragon rider's academy. In order to be part of the academy, he must pass three tests, while simultaneously fighting off bullies and solving a deadly mystery.

The book felt a bit like Harry Potter - if The Goblet of Fire were the entrance exam instead of a school competition. Eldwin's new friend Maren was almost exactly Hermione (except when it came to the rules - she broke all of them). The tests also reminded me of the trials in Divergent. They seemed to get into people's heads, rather than just provide a straightforward, same-for-everyone process. But while the story didn't feel original, I still really enjoyed it. I mean, who wouldn't want Hogwarts students to all become dragon riders and ride out together to track the undead Voldemort?

Eldwin was annoying at times, and definitely has room to grow, but he is still a kid and I am hopeful that future books will show a progression in his character. Also, there was too much commentary about his thoughts. This is one of my pet peeves - I don't want to be stuck in a teenager's head and can usually assume what they are thinking by what the said, thus no need for explanation. I liked Maren a lot. She was interesting and I bought into her back story about wanting to prove herself on her own terms. I didn't really feel like I got to know the other characters, and the ending was a bit of a twist, leaving Eldwin's future companions uncertain, but I still expect the next book in the series will delve a little deeper into a few of them. There is also a plot concerning a false king that is never completely explained, so I have high hopes that the rest of the series will veer away from the Hogwarts feel and be more original.

I received a free copy of the audiobook from the narrator who did an amazing job and have reviewed it because I thought it was worth reviewing.

I was loving the book and then it ended and now I'm wanting more. I really enjoyed this book and can't wait till the others come out. Great job. I wasn't sure about the narrator at first back cane to love him.

Enjoyable story of a young boy trying to follow in his fathers footsteps to become a dragon rider. Andrew McDermott does a great job with the narration

narrator definitely made story, every now and then issues with accent bot overall doctor who once again makes Americans broader

Great start to the series!

I love stories about dragons and this one is great! It's the beginning of the series so we are introduced to Eldwin as he attends the school of sorcery in order to move up the ranks to become a Dragon Guard. Loads of lessons to learn and growing to do. Great story and narration!

Trial by Sorcery to join the elite Dragon Guard

This is really about the audio edition, which I thoroughly enjoyed. Andrew McDermott is especially suited to narrate fantasy and this book lives due to his excellent delivery.

An easy escapist coming of age story of a young man trying out for the Dragon Guard School and the chance of bonding with a dragon. This is really only a novella and is the first of five. Most suited for the teens, some violence, no sex and a simple uncomplicated plot.

I found Eldwin to be a rather lack lustre protagonist, always a nay sayer. In contrast, Maren was a delight, " rules are made to be broken".

Spoiler alert!
Eldwin, now an orphan, travels to the citadel to enlist in the Dragon Guards. Eldwin's father, a Dragon Guard himself, was killed in the great war against the False King. A war which devastated the lands of Eldwin's family. With a maimed right hand, his father's sword and the desire to follow his father's footsteps Eldwin enrols for testing. These are the trials by sorcery - Compassion, Magical Aptitude and Potential for armed combat. True to trope, Edwin meets bullies, discrimination and a feisty female student advocate. This episode ends with the completion of the testing.

I will continue the series to see how the events play out. There is trouble brewing with the return of the False King and Eldwin needs a dragon.

This is a great story, I enjoyed the concept of dragons and sorcery!
It tells a good tale and the narrator was fantastic, I can’t wait to read the next one!

Richard Fierce has written ‘Trial By Sorcery (Dragon Riders of Osnen Book 1)’ in a format that is suitable for a younger age group to read – probably young to mid-teens but, were I still a child, I would most likely have been keen to get my hands on it when I was around 10 or 11 years of age. Having said that, it can equally be enjoyed by adults who want a lighter read (i.e. it’s not dark or full of terribly graphic descriptions of any kind). I found this to be a well written book and became immersed in the story from the start. There is an unexpected twist at the end which makes for a cliff-hanger. I would have liked the book to be longer but it is an apt ending to the first book in the series. I highly recommend this audiobook as Andrew McDermott does an excellent job with the narration; great for listening to at any time, but particularly good for car journeys.

The tale is told in the first person by Eldwin, the main character, so events are experienced from his perspective, along with his thoughts and feelings. Eldwin wants to follow in his father’s footsteps to become part of the Dragon Guard. Along with other hopefuls, he enrols to sit the entrance exam for dragon school comprising three tests (compassion, magical aptitude and armed combat) over several days. It is necessary to pass a test in order to be allowed to take the next test and all three tests must be passed in order to be accepted as an apprentice; otherwise it is mandatory to leave the school – and a memory wipe will also take place. The same is true for breaking specific school rules.

Eldwin befriends one of the other would-be apprentices, Maren. She is keeping her true identity secret as she wants to be able to prove her worth on the same footing as everyone else. In addition, Maren is a compulsive rule-breaker.

A strange occurrence after Eldwin has completed his first test but whilst he is still in the test chamber heralds the start of a mystery involving treachery that he and Maren try to solve whilst continuing to take part in the subsequent tests.