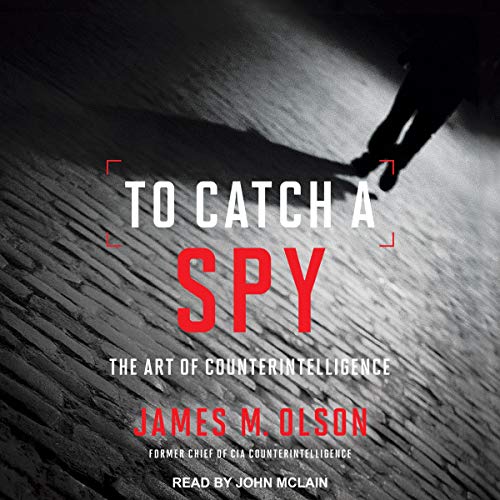 To Catch a Spy

The United States is losing the counterintelligence war. Foreign intelligence services, particularly those of China, Russia, and Cuba, are recruiting spies in our midst and stealing our secrets and cutting-edge technologies.

In To Catch a Spy: The Art of Counterintelligence, James M. Olson, former chief of CIA counterintelligence, offers a wake-up call for the American public and also a guide for how our country can do a better job of protecting its national security and trade secrets. Olson takes the listener into the arcane world of counterintelligence as he lived it during his 30-year career in the CIA.

This book would be ok if there was a different narrator. I tried so hard to continue because the story was interesting for the most part aside from the authors personal agenda. I just could not get past the voice, tone and inflection. Terrible.

Learn about counterintelligence success and failures from an expert.

Ok, this book is not a how to manual on tradecraft, but if the subject of counterintelligence is of interest to you, you’ll enjoy it. The author begins with a brief survey of the counterintelligence threat. He then discusses his 10 commandments of counter intelligence. He next uses case studies (12 I think) based on real world spy cases to highlight the application of those commandments in action. He does this in a lessons learned fashion. Given the authors career in CI, the lessons of his book would be of interest to anyone considering service in the intelligence world. The book was well organized and the narration solid.

Incredible story by a man with a big ego

I have the utmost respect for anyone in our military, Federal law enforcement and the CIA. They are putting their lives on the line every day for the USA. The stories in this book are proof. I also appreciate the author's expertise in the field of counterintelligence.

If you like this topic, even a little, you'll really enjoy this book. However, I couldn't give it 5 stars because of the author's braggadocio in the way he talks of his experiences. Half way through I was convinced that he thinks of himself as the greatest spy hunter who ever lived. That may or may not be true but I've listened to or read many books by people who were accomplished in their field and most of them present the material in a more, shall we say, humble manner. Their purpose was to inform. I think this author had the same purpose but also to stroke his own ego.

Listen or read it but know this going un so it is hopefully less distracting when it first happens and going forward.

The voice being used is awful and annoying. It was hard listening to.

Great stories. The book was ok over all.

Title is catchier than the plot. I recommend you keep looking for a different book.

Robot reading with frustrating intonation ruining the experience of an otherwise interesting subject. Story gets 4 stars because the good choice of subject is illustrated with somewhat shallow anecdotes.