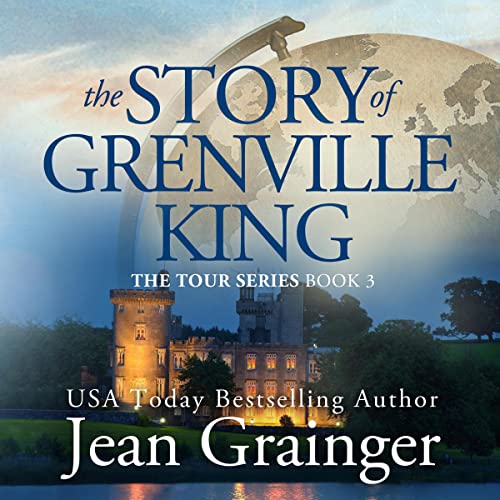 The Story of Grenville King

Castle Dysert is derelict, but Conor is determined to revive it, so why is someone trying to stop him?

Handsome, kind, and funny, Conor O'Shea has had enough of driving and guiding tours of Ireland.

So when an opportunity to renovate and run the magnificent but rundown Castle Dysert as a five-star resort presents itself, he grabs it with both hands.

But problems arise almost immediately when his business partner appears to have more on her agenda than just business.

To add to that, his darling wife seems discontented as a stay-at-home mom, and his in-laws have moved in.

With his family's future now entangled in a stunningly beautiful old castle on the coast of Clare, Conor undertakes a mammoth project, and in so doing, he uncovers the troubled past of this ancient stronghold. The mystery of the family who lived, loved, and lost their lives within the walls of the castle is reflected in his own family as they too struggle to let go of the past.

Like in every small Irish village, gossip abounds. But do the ghosts of regret still haunt these ancient hallways? It is now left to Conor to explore the truth and uncover a heartbreaking lesson on the power of memory and the long threads that bind us together.

In The Story of Grenville King, Jean Grainger takes you once again to the real heart of Ireland.

The Story of Grenville Kingに寄せられたリスナーの声

What a great story..

I was so happy to see the author has made The Tour into a series. Not since Maeve Binchy have I enjoyed the Irish setting and the rich characters. I hope she writes many more - I’m hoping the next book has adventures of the running of The Castle :-)..

Excellent Continuation of the Tour Series

The content of the story was on par with the rest of the Tour Series, and the narrator does an excellent job representing the individual characters and keeping the story interesting.

Much better narrator. Let’s hope she’s able to do more of this series.Great voices. Keep up the writing!

Humor, Empathy, Suspense, and the Supernatural

Loved this story. Listened to it in two days. This is my favorite so far. Conor, Ana, Corleen, and Dylan search their souls for answers. Others are brought in as a dilapidated castle is refurished providing a mystery to be solved. Sad that their are no more audible books for this series.

The narrator was great bringing voice to so many characters. Book 2 has some agressive negative comments regarding Catholicism, it could be somewhat drsturbing to this of the Catholic faith. However, the entire series is enjoyable.

The magic of Irish castles

Ms Waring has done a masterful work on
The audio’ the story of Grenville King’.
The story itself…involving such magic…
Was not easy to put together or keep going.
The mystery was present from the beginning
….not obvious but there
It kept me listening
Congratulations to ms Grainger
More please!!

I'm such a fan of The Tour series

This next part of "The Tour" series takes Connor in a new direction - this time making the move from Tour Guide and Bus Driver to Boutique Hotel Operator.

This book also reintroduces us to a number of the characters from the first book both indirectly (by referencing them, their lives and fates) or by directly involving them in this story.

I loved learning more about the character of Corlene, who was initially introduced as a very superficial and selfish character. She has such great character development both off the pages and on and we see a whole new side of her, who she was and who she has become.

I also enjoyed learning more about Anna (Connors' wife) and her family and background. I feel that she has been a 'bit' player up until now but in this book she comes into her own as a primary character.

I listened to the Audible Unabridged version of this book. There was a change of narrator for this book which I found a little disappointing personally but not because there was anything at all wrong with the new narrator. It is simply that I was used to listening to Patrick Moy as Connor and my brain was expecting to hear his voice again (despite already knowing it wouldn't be). The change was probably also more noticeable because it moved from being a male narrator previously to a female one now. At the end of the day, though, it was only a minor issue. Siobhan Waring is a good narrator and did a great job of this book. And the more important thing to me was that this was finally available as an audiobook - I feel like I've been waiting forever for it and a new narrator was certainly not going to deter me from buying it. I'll also be getting the next one as soon as it's out on audio, regardless of who the narrator for it is.

Am I glad I read it - yes
Was it a waste of my time - no
Would I sit down and read it all over again - yes
Would I read more by this author based on this book - yes, now desperately waiting for Book 4 to come out in Audio.