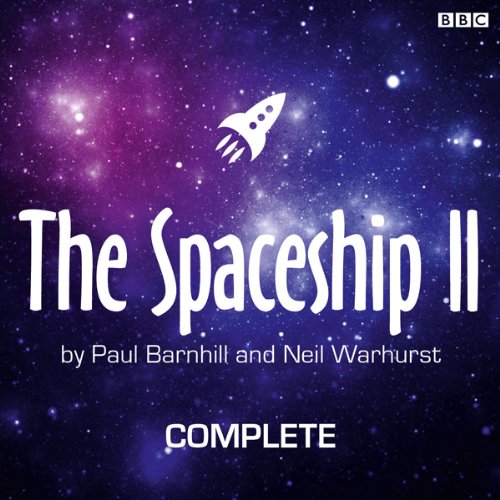 The hilarious comedy sci-fi series set in the 22nd century, written by Paul Barnhill and Neil Warhurst and directed by Sally Avens. In these five episodes, Captain Gordon Taylor hits trouble over a failing call centre and scientist Clive 55 reconstructs a dead space pirate - who before long is running the ship. In addition, the crew must deal with a group of space tourists and a mystery virus which makes them age at an alarming rate - and they are brought face-to-face with reality when they reach the end of the universe.

I've loved James Fleet since watching the Vicar of Dibley. I find his voice comforting and his comedic timing is spot on. Quandrahorn has got to be my fav tho.
I have loved Rosie Cavaliero since Jam and Jerusalem, but my fav is Nebulous and a Young Doctor's notebook.

I am fan of spoof audiobooks. My favourite was Bleak Expectations (Victorian spoof) but now it’s this The Spaceship II (Sci-fi spoof). I have given it 5 stars because of the absence of canned laughter (I don’t need anyone to tell me when to laugh) but it's very funny even so.

I can find The Spaceship I anywhere? I have looked at the Audible library; BBC website etc. but I haven’t found it. I will appreciate if anyone reading this review tells me where I can get a copy please?

It’s so funny and amazingly written amazing comedy it’s absolutely hilariously funny thanks for reading. Thanks

I thoroughly enjoyed this. season one is good too, but seems to be unavailable. Great shame.

I love this. perfect comedy series for anyone who has enjoyed Bleak Expectations, Nebulous, Elvenquest etc. brilliant performances by the cast. my only gripe? I can't find series 1 ANYWHERE.