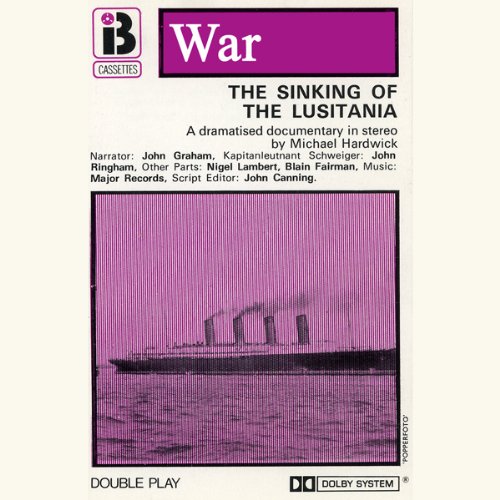 It was one of the most horrifying single acts of destruction in the First World War, and it was instrumental in bringing America into the war. Was it cold-blooded mass murder or a justifiable Act of War? This programme dramatically presents all sides of the story, as the German submarine U-20 stalks her giant prey.
©1975 Michael Hardwick (P)1975 Ivan and Inge Berg

While many British passenger vessels were conscripted into military action against Germany during World War One, the RMS Lusitania kept making her normal route between Liverpool and New York City. On May 7, 1915, the vessel was struck by torpedoes from a German submarine. The result of the action was 1,198 noncombatants killed and the hastening of the United States toward war.

This audiobook portrait of the disaster moves beyond pure historicity and gives the listener’s imagination a real prod. Great British actors, including John Ringham, act out plausible scenarios - complete with sound effects - that help the listener imagine the event from all sides, including the German. At just under an hour, this audiobook will transport you to 1915.

The Sinking of the Lusitania (Dramatised)に寄せられたリスナーの声