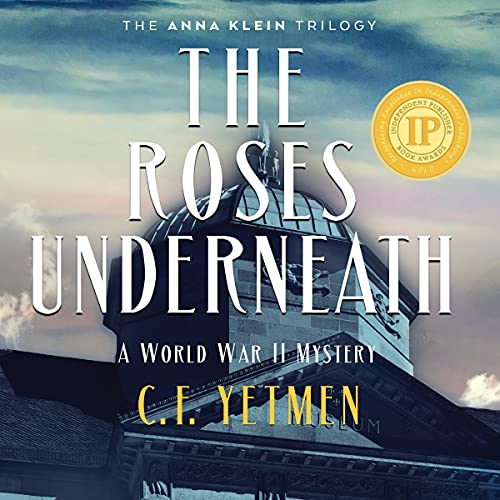 It is August 1945 in Wiesbaden, Germany. With the country in ruins, Anna Klein, displaced and separated from her beloved husband, struggles to support herself and her six-year-old daughter, Amalia. Her job typing forms at the Collecting Point for the US Army's Monuments Men is the only thing keeping her afloat. Charged with securing Nazi-looted art and rebuilding Germany's monuments, the Americans are on the hunt for stolen treasures. But after the horrors of the war, Anna wants only to hide from the truth and rebuild a life with her family.

When the easy-going American Captain Henry Cooper recruits her as his reluctant translator, the two of them stumble on a mysterious stash of art in a villa outside of town. Cooper's penchant for breaking the rules capsizes Anna's tenuous security and propels her into a search for elusive truth and justice in a world where everyone is hiding something.

In her debut novel, C.F. Yetmen tells a story of loss and reconciliation in a shattered world coming to terms with war and its aftermath.

A heartfelt and stirring story

If you could sum up The Roses Underneath in three words, what would they be?

This exquisitely crafted novel by C.F Yetmen cuts to the heart of love, loss and hope. In a universal and very personal experience of survival and courage in post World War II, we walk in the worn shoes of Anna Klein, a young German mother determined to find the way forward for herself and her six year old daughter, Amalia.

C.F. Yetmen has found the perfect voice for her story. In The Roses Underneath, narrator Linda Joy creates an undercurrent of urgency that leads us forward. Each character is brought into sharp focus and through her careful shading, we see ourselves. This is essential reading.

Glad I stuck with it.

However, I almost gave up immediately due to the narration of Linda Joy. I felt that the cadence of her reading was very stilted and very slow. After doing some research, it seems that she is perhaps a native German speaker and that her British English is a second language and perhaps that is the reason for the rhythm of her reading. At any rate I'm glad I stuck with it, because I found that the story began to take over and banish the distraction I felt and listening to the narration that to me is the mark of a good narrator… When I no longer notice that i'm even really been bread too.

I was also pleased by many turns that I did not expect in this book. I expected a story about arts and trying to place stolen art back with its rightful owners. What instead came about was a tale of intrigue of backdoor dealings of orphans from Hitler's regime, and of people trying to do the best they can in very very difficult situations including starvation.

Set it up being a pretty damn good little Mistry with lots of intrigue. If you like this era in history, this is a good diversion.

I'd recommend reading this rather than listening to it. The narrator sounded robotic although her character voices were ok.

Engaging. What a great story and storyteller.

What did you love best about The Roses Underneath?

I have listened to other works by Linda Joy so I knew it would be good but even with high expectations I’m impressed. I feel as if I’m in post WWI Germany having a cup of coffee and conversation with the narrator. I actually look forward to my next work commute so I can continue the story.

What made the experience of listening to The Roses Underneath the most enjoyable?

I enjoy stories that revolve around WWII. I stumbled onto this book by accident but am quite pleased that I did. I loved the story & was sad to finish it. It was compelling & exciting. I'm just sorry there aren't other books by this author. I think she has a real knack for writing.

I read other reviews in which the narrator received negative comments but I thought she was really good & enjoyed her different voices. I've listened to hundreds of narrators & some are pretty awful. But, in my opinion, Linda Joy is really good.

I tried to like this book but the narrator sounded like a child. I just finished a series of 3 books starting with the" TEA Rose' that were evaluated as with-in my top 5 narrations and stories. I also finished listening to "Three Daughters" that was so lovely and much bette !than this story!
I have listened to over 100 audios' and I love Audible .com because if you decide the listening is not to your liking they return the credit.

I had to quit listening after 3 hours. I know it must be difficult to please everyone and the narrator has a difficult assignment to sound like a fictional character, but I do not feel Linda Joy lives up to my expectations.


What could C. F. Yetmen have done to make this a more enjoyable book for you?

Don't sound like you are writing to a child.

Poor not to my liking.