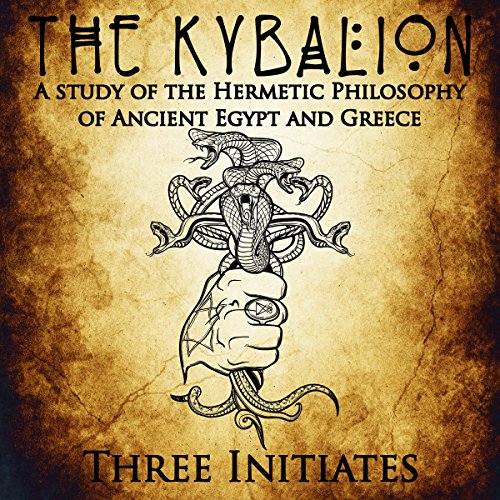 A must-listen for the progressive mind, The Kybalion: A Study of the Hermetic Philosophy of Ancient Egypt and Greece was originally published under the pen name, Three Initiates, in 1908. It claims to have been based on the philosophy of Hermeticism, which became influential to the development of the New Age of Thought in the early 1900s. It is very similar to the advice offered by the Book of Proverbs in the Bible.

The book is devoted to exploring seven principles centered around mentalism, correspondence, vibration, polarity, rhythm, causation and effect, and gender. Hermeticism affirms a single theological thought present in all religious beliefs and granted by God in the beginning of time. It has influenced everything from modern Romanticism to liberal Christianity.

I feel this book has helped me find my new path to live my life true. I always felt something like this existed, but didn’t know where or how.

I loved the book, it drew a line from Christianity. Which it should. However, this is only a start and should be expected to study more in order to understand true hermetics/gnosis.

great book read it now, must read lol seriously! buy now! there alot of keys and its helps with unifying masculine and feminine concepts and frequency.

I've found peace and calm reading this though some very troubling times. I love this book.

This was very well read but the chapter headings were off. Overall he read it very well and it was a magnificent book!!

I love this book wonderful conformation! My whole life I knew there was more meaning and this book gives such clear understanding.

had to stop half way through because it was so bad, stupid and simply wrong. i cant see what anyone could benefit from such nonsense.

They should teach this to kids in schools. The world would be a better place.

loved it, first listening was not syncing but 2nd time round WOW, WAS READY FOR IT