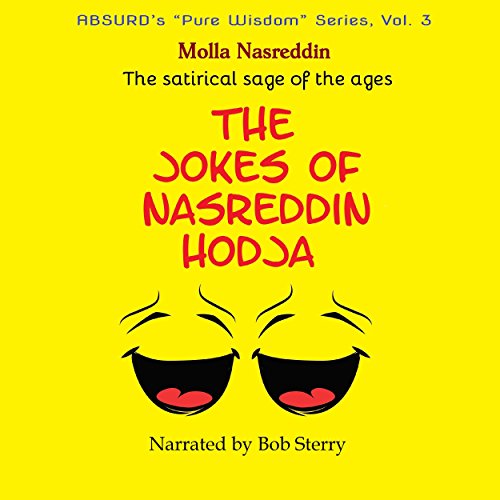 Nasreddin is a 13th-century satirical Sufi, a populist philosopher and wise man, remembered for his funny stories and anecdotes. He is, indeed, a very serious joker who shows that the world is a cosmic joke, who illustrates that the world is not a tragedy, but a comedy - the world is a place where if one can learn how to laugh, s/he has learned all. If one's prayer cannot become a deep laughter that comes from all over his/her being, if his/her prayer is sad, and if s/he cannot joke with his/her god, then s/he is not truly religious. Nasreddin appears in thousands of stories - sometimes witty, sometimes wise, but often, too, a fool or the butt of a joke. He tends to be illogical yet logical, rational yet irrational, bizarre yet normal, and simple yet profoundly wise. Each of his stories finds him in a different situation, and through his viewpoint, it humorously explains and teaches us on various themes of life. The great allure of his stories is that they are funny as well as educational and thought provoking, they deal with ideas that have relevance to even today's world and people, and they deal with fundamental human nature - social injustice, the privileges of the upper classes, selfishness among the common people, foibles and incompetence, ignorance and narrow-mindedness of all kinds, and so on. Among thousands of his folktales/stories/jokes, we have collected 200 great ones in this book.

The Jokes of Nasreddin Hodjaに寄せられたリスナーの声

This book contains a lot of funny jokes and stories. It kept me and my husband laughing all the way through. I received this book at my request and I am voluntarily leaving my honest review here of my own volition. I recommend this book of you love to laugh.

I read Nasreddin when I was a kid. Now read this audiobook of his jokes after so many years. Great stuff.

Great collection. First part, the original part, is much better than the second part. The 2nd part's some jokes are shallow, not as good as original nasreddin.